Beloved father, husband, craftsman, deli and bar owner, guardian of the past, and teller of bad jokes, Bob Lovejoy left us suddenly on July 7th, 2018, felled by a stroke just shy of his 70th birthday. 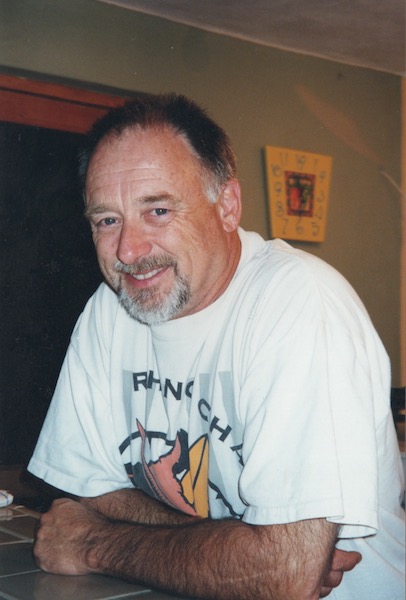 Born August 29, 1948 to Charles and Patricia Lovejoy, he was a proud son of Burbank, attending Ralph Emerson Elementary, John Muir JHS and Burbank High School, maintaining friendships he made there through adulthood. He attended Cal State Fullerton and eventually graduated with a Masters in Design from Cal State Northridge. His family collected antiques creating in him an intense appreciation for the past and its relics. He idolized his uncles and his grandfather, who played polo in Santa Barbara on occasion. As a young man, Bob was a master woodworker and was published in magazines devoted to the craft.

In 1970 he married Debra Brandon with whom he had two sons, Clayton (who would later become his business partner) and Graham, who preceded him in death in 2016. Following that marriage, he relocated to Santa Barbara with Dawn Broomis, who would become his wife and mother to their daughter Athena.

Bob took up the tile trade in 1977, and soon struck out on his own, starting Lovejoy Design working alongside Roger Chackel and Bob McCourt who would become dear friends. His keen sense of design set him apart from others, and his work was a crowning piece of many local estates.

Bob and Dawn loved to travel, visiting the ancient ruins of Mexico and Guatemala, sailing in Greece and sunning in Costa Rica. Over the course of 25 years, he built a second home on the Sea of Cortez in Baja California.

Bob loved to fish, play golf, watch his beloved Rams play football, coach and play softball, cheer on the Dodgers the Santa Barbara Foresters, and play bocce ball. He was a social butterfly, a recent and proud member of the D.B.’s on the Mesa, and generally got along with everybody. He loved old roots reggae, the blues, the Talking Heads, Taj Mahal, and attending concerts at The Lobero, The Bowl and other great local venues.

In 2006, as his knees and tiling were slowing down, Bob started his second act. He and Clay walked out of Jimmy’s one night and saw a “For Sale” sign next door at Chio’s Sandwich Shop. Having always dreamt of opening a deli, he invited Clay and Bob (whose sandwiches he loved) to join him in his venture, saying, “Let’s take a chance!”  Three Pickles Subs & Sandwiches was born, alas, just as Jimmy’s owner Tommy Chung was retiring and closing the legendary Chinatown restaurant and bar.  The shop thrived and in 2009 they opened up a second location in Goleta. In 2010 they were asked by Jerry Jackman and the Santa Barbara Trust for Historic Preservation to take over the lease of a short-lived store in the restaurant half of Jimmy’s.  Lovejoy & Co. spent months and untold sums of money repairing previous tenant damage and bringing the place up to snuff.  A plate with a design he liked became the inspiration for the floor tile (and is displayed there today).  A long, beautiful marble bar invited customers to stay and enjoy their lunches, and they did.

Bob’s true gift to the citizenry of Santa Barbara is next door to Three Pickles – Lovejoy’s Pickle Room.  Bob was given the lease to the bar, his cherished hangout, and set out to restore it to its former glory, with updated touches. He extended the bar to its original length, repaired and re-plumbed, jackhammered, and eventually rolled on three coats of Ralph Lauren Gold paint (“Even the walls were thirsty!,” remarked pal, Mo McFadden). Tommy gave his blessing to hang the old Jimmy’s Oriental Gardens sign behind the bar, making it not only the focal point of the bar, but an anchor into the past. He convinced his friend and longtime Jimmy’s bartender, Willy Gilbert came onboard to run the place; Bob would have it no other way. Bob, a meticulous Virgo, with his sharp eye for detail and talented hand, was the only one that could’ve done justice to Jimmy’s and the Chung family. It’s what Jackman called, “a first-rate act of historic restoration.” The building and bar stand as his lasting testament to wanting to keep in place a spot that made us all, friend or first-timer, feel at home.  Bob was as good as a “front of house” person as any establishment could hope to have.

Bob leaves behind his wife Dawn and their daughter Athena, his son Clay and wife Martha and their boys Mason and Ethan, a granddaughter Ariah, and many, many friends and admirers.

A celebration of Bob Lovejoy’s life will be held at 2PM on Sunday, September 16, 2018 at the Glen Annie Golf Club, 405 Glen Annie Rd. in Goleta.

Toggle Comments (Show)
Robert Harry Lovejoy
Shocked & saddened, my heart goes out to his family & family of friends. He was well-loved, & spread good energy. RIP.
Please Login or Register to comment on this.

Any Rand, that champion of