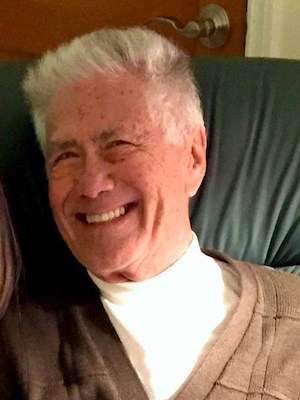 Born in Milwaukee, Wisconsin, Richard attended North Division High School and soon after served in the United States Air Force in Okinawa, Japan from 1950-1953 during the Korean War. Upon his return, he graduated from the University of Wisconsin at Madison with a degree in business. He soon began work at what would, after many name changes, become Delco Systems Operations, the Aerospace division of General Motors. He, along with 400 other families from Delco, were transferred to Santa Barbara in 1972. He spent 32 years at Delco as a budget supervisor and cost analyst. He worked alongside the team of men and women who contributed to the Apollo program, lunar rover vehicle, and numerous other defense projects.

Richard spent his entire adult life giving his time and heart to community. He donated gallons of blood to the red cross. He led the United Way charity drive at Delco each year. He was a proud on-call volunteer for the Santa Barbara Red Cross helping families when emergencies struck, which also included traveling to Florida for disaster relief while in his 70s. He volunteered serving two terms on the Santa Barbara Grand Jury which is an overwatch of SB, government agencies, and various districts throughout the county. He was a long-time member and treasurer of the SB Mac Users Group. He was also a lead coordinator and a driver for the American Cancer Society

's Road to Recovery program which provided rides for patients to their appointments.

Family and friends meant everything to Richard. As a father and grandfather, he participated in the activities of his children and grandchildren. Despite working six days a week, he made time to be a scout leader, coach, drove his children to practices and showed up for every swim meet, synchronized swimming event, baseball, basketball & soccer game, recital, and ballet performance. He was also an active member of the Parents Teacher Association (PTA). He provided daily encouragement and a strong support system for his family and friends.

He is survived by his two children, Darci Eigen Shaw, Brad Eigen and their spouses Larry Shaw and Ann Lauer. He was "Papa" to four grandchildren, Allison, David, Noah and Alivia. He was preceded in death by his wife Charlyne. He is also survived by his sister Harriet Fine, her children Elliott, Michael, Rachel and their families, as well as by his dearest friends Carol Griessen and Gary Monson along with their families.

or donate to, or give of your time, to any organization that is important to you.

It's impossible to drive down

A teacher thinks it was old

Gotta keep us on that watch

No it was probably “peaceful

There are alot of people who

After seven weeks of enduring