The community joined together Thursday evening on the second anniversary of the Montecito debris flow to remember the 23 lives that were lost.

Westmont College welcomed hundreds of people into their gymnasium for the remembrance event titled, "Raising Our Light: A Night of Remembrance, Community, and Hope" with soothing music played by harpist Laurie Rasmussen.

Dr. Gayle Beebe, President of Westmont College, introduced a processional of 23 candles, one for each of the victims, followed by a moment of silence.

Survivor Carie Baker, joined by her daughter Summer, spoke on remembering the lives of her two daughters Morgan and Sawyer who died during the debris flow. “You all held us up when we could not do it ourselves and we are grateful," said Carie.

Lauren Cantin sang a beautiful rendition of "You'll Never Walk Alone" in honor of her father Dave and brother Jack.

"There's no end date to the healing process," Powell said. He then asked the crowd to stand up as a demonstration of commitment to stand together as a community no matter what comes next. 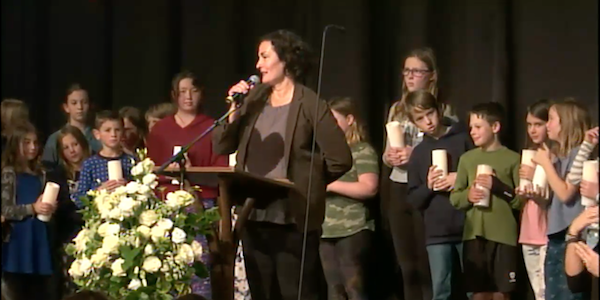 Lalo Barajas who lost his partner of 17 years, Peter Fleurat, read a moving letter of gratitude on healing and strength.

Suzanne Grimmesey, Chief Strategy Officer of County of Santa Barbara Behavioral Wellness, provided kind words and resources for those who need them while normalizing the feelings and process of grief. A list of resources is available at rivieracarecenter.org.

The program concluded with a heartwarming song from the Childrens’ Chorus from Montecito Schools led by Choir Director Sara Di’Salvo.

Attendees were then invited to enjoy soup provided by the Organic Soup Kitchen and hot beverages from M4 Churches.

In case you missed it, the livestream of the entire program can be viewed here.

There are more uneducated

So just clearcut and see what

Schedule it for a sunny day

Sac, I’m not suggesting that

Chip, it's rather silly you