Scroll through the above photos by Fritz Olenberger

Over 750 Rancheros Visitadores rode through Solvang for their annual breast cancer awareness fundraiser on Saturday.

For 87 years the "visiting ranchers" stick to tradition and come to the Santa Ynez Valley on horse and carriage. The historical men's only club has cowboys from over 37 states and 6 countries who make the trek each year. 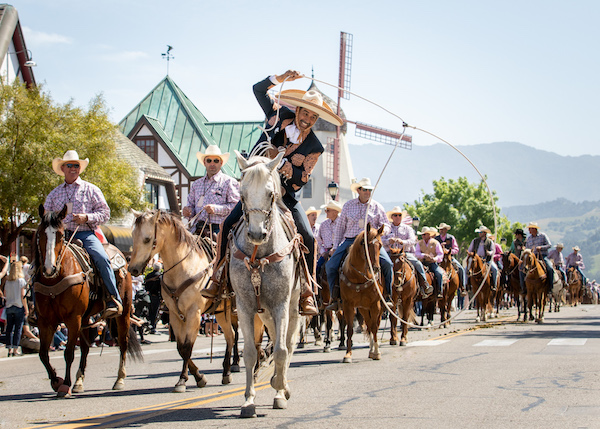 For the eighth year in a row, the Rancheros Visitadores partnered with Wrangler Jeans and the Tough Enough to Wear Pink Foundation to raise awareness and funds for the Ridley-Tree Cancer Center of Santa Barbara. Since 2012, over $1 million has been raised for the Cancer Foundation of Santa Barbara with 100% of the proceeds help local breast cancer patients.

“The Rancheros have been returning to Santa Barbara County and the Santa Ynez Valley for 87 years. Though our members come from far and wide, this is the Rancheros’ home, and we have found a cause we believe in. We understand it is important to give back to the community we return to year after year,” explains Ranchero Steve Beneto. 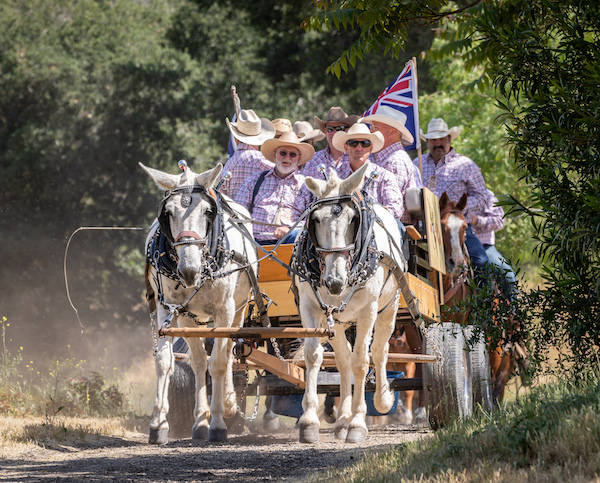 With pink shirts and decorations, the riders galloped on Alisal and Mission Drives for a short equestrian parade. They arrived at the Mission Santa Ines for the historical tradition of having their horses blessed. On behalf of the 1,100 members of the Rancheros Visitadores, a $1,020,000 check was presented to the Cancer Foundation.

After taking in refreshments, the group galloped along the Santa Ynez River trail for their week-long trek and encampment.

Does the camp still publish its closely held, members-only, daily newspaper during the week? I got to read one a few times and a lot goes on during the week.

I'm sure they all hit the sack as soon as the sun goes down from what I've been told.

"I'm sure they all hit the sack as soon as the sun goes down from what I've been told." They go to bed quite early (after vespers).

Talk with somebody in-the-know regarding the week at camp sometime, 0534.

That's exactly what I did by replying. Care to share? I'm curious about it.

Thank you for raising this money. It’s appreciated.

From stories I've heard the Rancho members don't go to bed at sunset, that's when the real partying starts. For many years the Floyd County Boys bluegrass group entertained them, maybe still do. There are wild stories coming out of that "men's campout". I like the pink plaid shirts, in the beginning of this breast cancer awareness by the Rancheros the shirts were a solid pink.

The shirts change every year. Cracks me up when media uses the wrong years photos.

Just cracks me up; the rumors that float around the Rancheros. They do not go to bed early, and yes, at least in the Vaquero camp, the food is way over the top.

Uhm they also forget to mention the prostitutes that travel to the area during the time they are in the area.

...and they forgot to mention the Viagra-filled Pez dispensers and baby bottles filled with boooze and the gimp in the "sissy" tent...yeah, they forgot those things, eh?

Absolutely correct, 6876.
The out of town "business women" have been a long tradition at the camp. We used to see them at the Red Barn & other S.Y. Valey venues as they accompanied their "business partners" for the evening. The money the "cowboys for the week" spend is astronomical.

Bonus points for anybody who can get their hands on the camp paper this week & report back.

Long time tradition of raising money for good causes while painting the town red. Literally. In high school (long long long time ago). I used to work at a hotel in Solvang. When these guys come through, they made a heck of a mess and tipped very well for the clean up. They are not all old, and definitely don't go to bed when the sun goes down. Unless they have business to take care of, if you know what I mean.

I have several concerns about

I have consistently thought

They will naturalize in your