On June 27, 2018, Property Crimes Detectives and the Street Crimes Unit contacted and arrested Santa Barbara resident, 27 year old, Jose Enrique Reyes in the area of 500 E. Ortega Street.  Reyes was taken into custody for an outstanding felony warrant and was suspected in two active theft investigations. A subsequent probation search of Reyes’ residence was conducted and the folllowing items were seized: 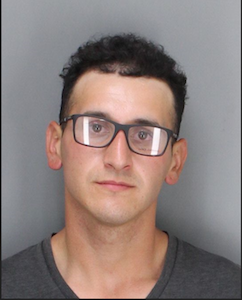 SBPD Detectives are working to identify the victims and rightful owners of the suspected stolen bicycles. Thus far, six victims have been identified and contacted.  The estimated value of the recovered bicycles based on current condition and make/model, has been approximated at $23,000.

The Santa Barbara Police Department would like to remind its’ citizens to lock their bicycles with strong and sturdy locks, make note of their make/model & serial numbers, and encourage bicycle owners to register their serial numbers on https://bikeindex.org. Bike Index is a worldwide database that includes over 168,000 catalogued bicycles. To date, thousands of stolen bicycles have been recovered around the world as a result of bicycle owners registering their bikes with Bike Index.

The band of troglodytes that

"Lompoc" prison is not in

Yeah, I wish I could have

Congratulations to the two

If this is such a "terrible,

My heart breaks for what is