The 23rd Annual Military Ball at Santa Barbara Hilton presented by Pierre Claeyssens Veterans Foundation Santa Barbara was yet another fun and meaningful reminder of those “Never Forgotten” honoring our men and women who have served our country in uniform.

The cocktail reception was alive with conversation and warm greetings as guests were bidding on a variety of wonderful silent auction items. It was an opportunity for old military friends to share stories and make plans for the November 9th Veterans Day events that include the Veterans Parade, Flyover, 7th Annual Salute to Vets and Veterans Day Ceremony at SB Cemetery on November 11th. 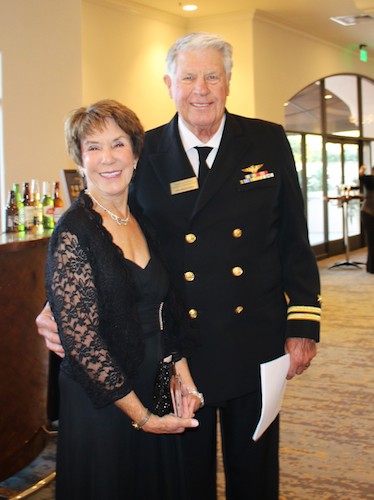 The ballroom was alive with red, white and blue, where the talented Art Deco Orchestra had everyone on their feet dancing between program presentations and courses of a delicious dinner presented by the Hilton Executive Chef Mossin Sugich.  Lt. John Blankenship shared this was the 17th year the Military Ball has been held at the Hilton location, and that the Hilton's are currently a major supporter in assisting our American veterans. 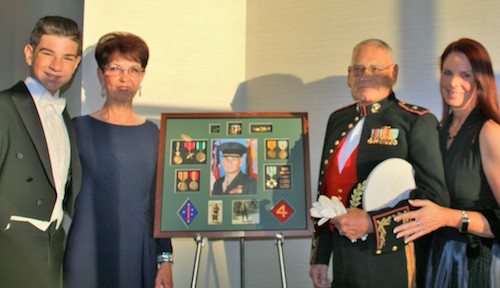 Meeting Eileen McDargh, who gave a wonderful presentation on the life of her mother who was a WASP was inspiring, as were the kudos to women serving in America's military that was a focus at this year's dinner. Believe me when Lt. Col. Mo Masson, USAF (ret.) got on stage to lead the Pledge of  Allegiance she had everyone's attention. 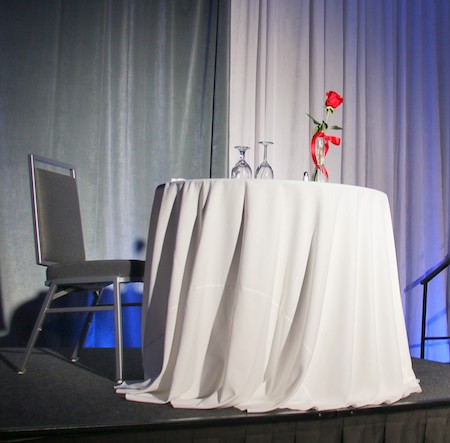 Kirsten Annell, an exceptional Senior Cadet with UC Santa Barbara's ROTC Surfrider Battalion presented “The Missing Man Ceremony” which was a touching reminder to everyone to never forget those who are missing. “The table is round – to show our everlasting concern for our missing men. The tablecloth is white – symbolizing the purity of their motives when answering the call to duty. The single red rose, displayed in a vase, reminds us of the life each of the missing, and the loved ones and friends of these Americans who keep the faith, awaiting answers. The vase is tied with a red ribbon, symbol of our continued determination to account for our missing. A slice of lemon on the bread plate is to remind us of the bitter fate of those captured and missing in a foreign land. A pinch of salt symbolizes the tears endured by those missing and their families who seek answers. The glass is inverted – to symbolize their inability to share this evening's toast. The chairs are empty – they are missing. Let us now raise our glasses in a toast to honor America's POW/MIAs and to the success of our efforts to account for them.”

As the daughter of a U.S. Marine who fought in the Pacific Campaign throughout the entirety of World War II I am always so personally touched by this amazing gathering of proud Americans and was grateful once again to be in their company. The work the Pierre Claeyssens Veterans Foundation is doing to help veterans is admirable and they need your contributions to continue. The Pierre Claeyssens Veterans Foundation contributes directly to UCSB ROTC, the Veterans Resource Center at UCSB, and SBCC's Veterans Support and Resource Center, and supports ending homelessness in the veteran community, ensuring that post 9/11 veterans are “Never Forgotten.” Visit http://www.pcvf.org/ or call 805-259-4394 for information or donations.

Toggle Comments (Show)
Pierre Claeyssens Veterans Foundation Military Ball
The link at the bottom of this article is wrong, please fix. Should be www.pcvf.org not www.pcfv.org
Please Login or Register to comment on this.

coastwatch - it's the store

He is obviously not a member

Obviously you are a Normy and

Obviously you are a Normy and