When a member of the community found a small, severely matted, filthy dog in his driveway at 4:00 a.m., he knew he had to help. He had not seen this dog before and noticed signs of neglect. His first thought was to take him to Santa Barbara Humane’s campus in Santa Maria.

The Lhasa Apso mix was in obvious pain. His matted hair was impeding his movement, he smelled, and worst of all, he had a piece of old twine wrapped around his snout. The string must have been there for a long time; it was partially embedded into his skin, leaving his face raw and irritated. 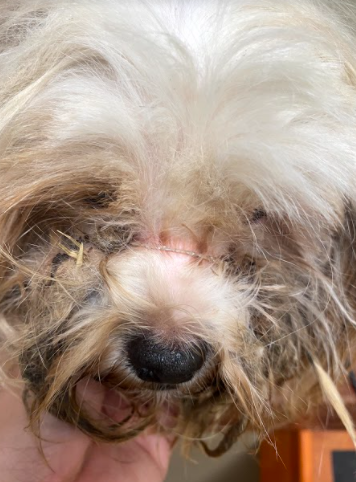 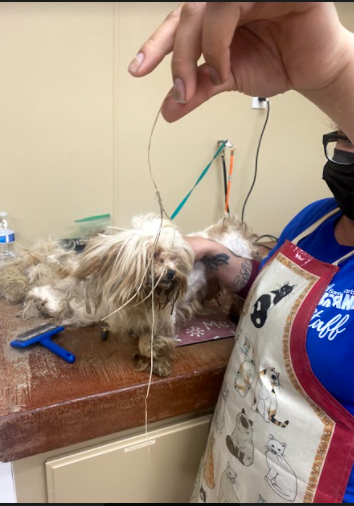 After medical treatment, a bath, and grooming, the Santa Barbara Humane staff was shocked to see the adorable, sweet dog underneath the matted fur and grime. Estimated at seven years old, the staff started calling him Ziggy. He weighs 10 pounds and is filled with love to give.

Because he was a stray, legally Ziggy had to wait 72 hours for someone to claim him. When no one arrived for this charming stray pup, he was given a chance at adoption. Ziggy still has a tough road ahead of him. He needs treatment for anemia due to his prior flea infestation and he has been diagnosed with dental disease. But luckily for Ziggy, the donor-supported TLC Fund is available at Santa Barbara Humane to cover all his veterinary expenses to set him up for a lifetime of wellness in his next home. 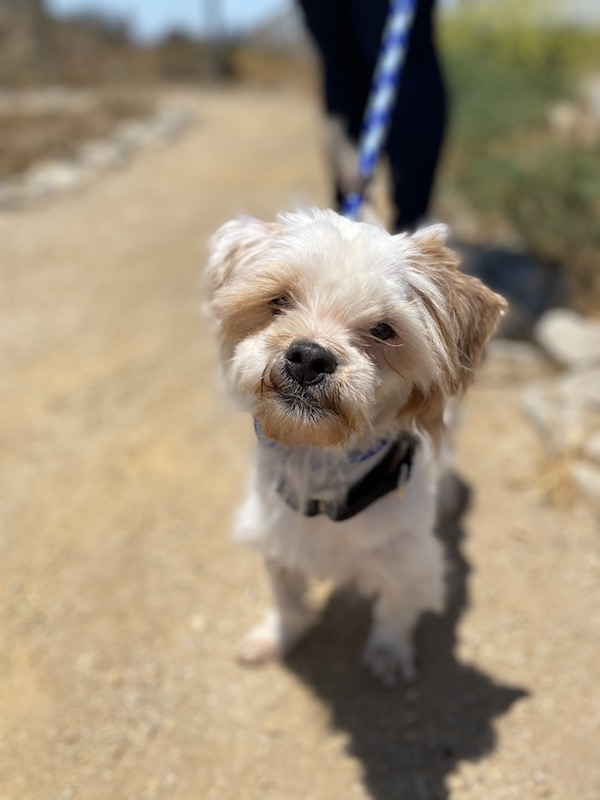 omg, such a hard life for such a sweet dog. He's going to love the new family that will get to love him....

We adopted 2 "Busdogs", chow/pit mixes in 2008, Rainbear and Chen, who is still kickin'. They have been wonderful dogs and the Santa Barbara Humane Society does amazing work. Please support their efforts.

Once upon a time in a Santa Barbara far, far away, there was a blue Solstice Bus, a converted school bus with a vw vanagon welded on top as a room for the boys, with a roof deck! They had 6 dogs, ran afoul of the City and had to relinquish 3 dogs. The SBHS deemed one "Cheeto" to be agressive and so put him down.
The intent had been to create a new breed through "line breeding". Cue Deliverance banjoes. And said inbreeding probably explains the early demise of the son/halfbrother Rainbear. Rainbear in particular was a cute pup. We miss Hendrys Beach in the wee hours.

What a wonderful save!!!

There's a mention of dental work; I am wondering if the SB Humane Society does dog dental cleaning for the public (for pay, of course)? My now 10-years-old rescue dog needs serious teeth cleaning. Or does anyone have any recommendations?

Call La Cumbre Feed (Phone: (805) 687-1880) and book an appointment with Smiling Canines.----- La Cumbre Feed is the livestock/pet food supply place on Calle Real, between Earl Warren and where Sears used to be (parallel to Hwy 101.------ I prefer this location to pet stores because you don't have to deal with seeing caged animals for sale (as w/ pet shops).

The dental work is done w/ no anesthesia and I've been using this service for 10+ years for my dogs, with excellent results. It's a mobile service, so you need to book in ahead for a Santa Barbara appt. Cost is somewhere around $140 and WELL worth it.

Humane Society has a Great clinic! But only for vaccines and spay/neuters, as far as I know.
Services are listed here: https://sbhumane.org/clinic/

I believe dental cleanings made my pets' lives longer, I had a vet do full treatments under anesthesia, pets lived to almost 19.
It. Is. Expensive.
Check Care4Paws website (please don't call them first); call every vet in town to inquire about price and payment plans. Most if not all vets do not take payment plans.

Or go for Minibeast's recommendation.

If you see a vet every year or 2, they should be able to scrape off the most obvious tartar during exam; I had a couple of vets who did that for my cats. That favor may be long gone.

Bird, if you can't afford at least $500 or more for a full dental cleaning and possible extractions, please speak with your vet about intermittent antibiotic treatment.
My old American Eskimo rescue had heart issues; I had her for 2 years on inexpensive, common heart meds. My vets and I would not anesthetize her for what could be and should be done to her mouth.
The occasional round of antibiotics helped a LOT. She was not in pain while eating, but her breath.... The appearance of her gums also obviously improved.
I hope this is a step you can discuss with your vet.
Thanks for being a rescuer.

Bird. Lemos has a service come in periodically to clean dogs teeth. Howll n Good Doggie Dentals. The price is $225 and they always do a great job on my rescue Chi.

Our adoption from SBHS was a huge success, with dogs that might otherwise have been put down at another shelter. Their expert assessment of dog character, investment of countless hours of volunteer care, feeding, walking and most importantly, loving the dogs is what sets SBHS apart.
This is hard at this particular moment as a rescue we took in 2 weeks ago had to go back after the 14 month old attacked our 15 year old Busdog Chen. At least that young dog can go to a home w/o other dogs.
They are doing the best job they can here in Uruguay, but it is nothing like what the SBHS has done, continually, for a very long time. Thank You. Especially behaviour expert John and volunteer Sandee.

Probably should have mentioned that said dog attack and relinquishment transpired in the last 4 hours. It is hard.

I'm so sorry, my heart hurts with you. Please know I had no intention of hurting you with my advocacy for other nonprofits. Best to you and yours, take care.

SB County Animal Shelter did and does the same, for EVERY animal that comes in the door.
Even when people try to drop off their dying dogs as strays. Dogs that are picked up stray 5 times a year, to the extent that when personnel get a description and location of the dog, they say "So & so is coming in again!"
All done with so much care, love and compassion.
I will never stop supporting those who work in open-admission shelters.

. K9 Pals has a deservedly great reputation and put in the money to save shelter dogs.
Many dogs lived at the shelter for multiple years in the 2000's. And before. I have no personal observation since 2011. But I know what happens there -- it's rescue, love, care and so much effort, so much work!

905- No hard feelings, as you say, all the animal welfare entities deserve support.

I appreciate, I get the appreciation for Humane Society. BUT -- they are NOT an open shelter. They get to choose what dogs and cats they take in.

They are an owner-relinquishment shelter.

In Santa Barbara, they are next to each other on Overpass Rd, off Fairview. Just take a look at the land footprint, the office and the kennels to see the difference.

Your municipal shelter, Santa Barbara County Animal Services, is REQUIRED to accept every animal brought in. Intensive screening/investigative work is sometimes done to discover careless intent. But NO animal in need is turned away.

Humane Society requires vet or other paperwork to prove ownership before taking an animal in.

10 or 15 years ago, the County Shelter had "overnight cages." That was the first thing checked every morning. LItters of rabbits, cats and dogs were dumped with no info. Puppies with parvo, which contaminated the front yard for weeks/months.

Municipal shelters are often a horror show, even in places as nice as SB.
Please investigate and evaluate and give your money where it's most needed.
Thank you!

Humane Society has also taken in dogs from hurricane areas like Houston, right? Not sure what kind of records those dogs had but they were vetted before they were transferred.

A-1624680241 JUN 25, 2021 09:04 PM------Great, informative comment. I would like to add that everyone who shops Amazon should shop only amazonsmile.com----------Sign up for amazon smile.com and choose a group you would like to support.*** My family and I support care4paws.*** -----------------------"AmazonSmile is a program that donates 0.5% of your eligible purchases on Amazon to a charity of your choice. All you need to do is start your shopping at smile.amazon.com. The donation will be made at no extra cost to you and you can choose from nearly one million public charitable organizations."