The 24-acre brush fire south of Lompoc that took place on Labor Day was determined to be caused by recreational target shooting.

Evacuations were ordered for nearby residences and the fire was estimated to have the potential to grow to 200 acres. Crews were able to stop the forward progress at 24 acres.

There were no structures affected and no injuries, all evacuation orders were lifted.

Santa Barbara County Fire Department fire investigators announced the cause on Monday and reminded the public of the fire hazards associated with outdoor target shooting and the importance of following all local, state, and federal guidelines when doing so. 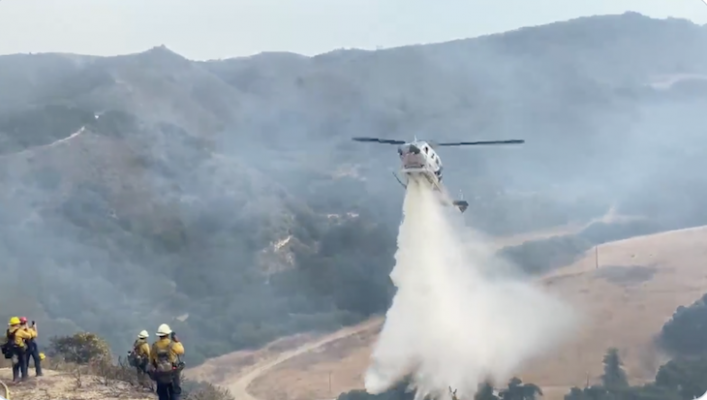 If you shoot someone when your life is not in imminent danger, just to protect property, you'll rightly spend a good deal of time in prison, and pay out a lot of money for the rest of your life.

The gun worship in this country is shameful. No one needs a gun. Ugh.

Truly remarkable how many "patriots" style themselves as traitors fighting the duly-elected government.

When S.H.T.F. You will all be hiding behind your friends you know are 2nd amendment supporters. The forefathers knew the dangers of oppressive governments from where they came. Think about it. The 2nd amendment wasn't written to protect deer hunters!!!

Can any one say what AR stands for in a rifle?

Wow- A voice of reason on Edhat.
Wish I could shake your han.......ah forget it,thats not allowed either.

While I agree with the sentiment, the reality is that the crazies have guns. The criminals have guns. Anyone who wants a gun will have a gun. And until laws are changed and guns are eliminated nationwide, one needs to be able to defend themselves. Perhaps I'm a bit biased since I'm ex-military, but we're not dealing with ideal situations. Protect yourself and arm yourself. And learn to service and operate your firearm proficiently and safely. You can preach all you want that "no one needs a gun", but when Antifa/MAGA is breaking into your yard to torch your home and spray-paint "Black Lives Matter/ Blue Lives Matter" on your property, then drop a Molotov, when the police are 20 minutes away, you'll wish you could defend yourself. This isn't about the ideal; its about reality. And the reality we're in sucks. But its the reality we're in. And you gotta adapt. Or you suffer and die. It's really that simple. Vote to change for the better, and arm yourself for the worst.

Agreed, BIGUGLYSTICK! No one needs a gun!

WTF, Goaty? You mean it's someone else's fault, not the ones choosing to use FIREarms during the worst wildfire season ever recorded in the state? Should those people even have guns? Should they drive cars? Always convenient to pass the buck.

When you close down the legal free ranges this is what happens. Re-open the glass factory.

@Basicinfo805
Genius move illegal shooter! Go out and shoot illegally somewhere for the h-ll of it and start a fire that our firefighters have to jump on. Not like we have a lot of extra fore resources right about now. Can't CURE stupid.

HAHA LOL Fixed it for you.

Almost, but not quite (if you're editing)

Genius move illegal shooter! Go out and shoot illegally somewhere for the h-ll of it and start a fire that our firefighters have to jump on. Not like we have a lot of extra fore resources right about now. Can't sure stupid.

It's usually not very bright people who "target shoot" anywhere but on a controlled range.

It actually is legal, but not very bright.

is there additional info other than the OP? Maybe not smart but I don't see it mentioned as illegal shooting. Several private properties in the area large enough to support recreational shooting.

Another example of a well-regulated militia exercising his constitutional rights.

And here I thought it was Antifa that did it.

No, Antifa was too busy starting fires in Oregon and Washington.

"those that say this doesn't

If you're hinging your

The NRA is bankrupt,

Did you read up on the

Here's another with less

Well? What did it turn out to

I posted something similar

WHAT?! You clearly don't