A Santa Barbara man was arrested for making terrorist threats and brandishing a weapon in a Mesa neighborhood on Thursday.

At 2:28 p.m. Thursday, Santa Barbara Police received a report of a male brandishing a black firearm and taser after a verbal altercation occurred between two individuals in the 200 block of Reef Court off Elise Way.

The victim reported serious verbal threats were made by John Gaffney, 58 of Santa Barbara, to harm the victim. Gaffney then fled into his apartment before police arrived.

Gaffney refused to answer calls from officers and face-to-face communication with Gaffney was established by the CNRT Officer. After brief negotiations, Gaffney surrendered without further incident, reports the Santa Barbara Police Department.

A stun-gun, taser, and pepper spray (mace) gun were located inside the residence.

Gaffney was arrested and booked in Santa Barbara County Jail on $50,000 bail for Terrorist Threats (felony) and Brandishing a Weapon (misdemeanor). 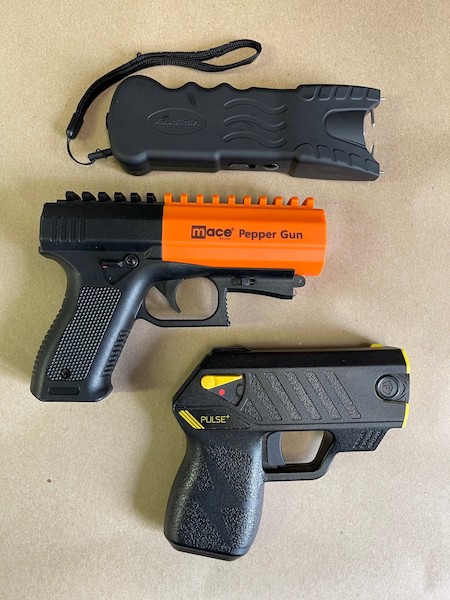 A suspect is brandishing a firearm on Elise Way. Several Police units are responding code 3 (lights and sirens).

Tear Gas gun had one when I was a kid back in Hammond, cost me 10 bucks and almost my life when I carried it in my back pocket and went into a 7-11 to buy beer. There is open carry where I'm from if you wear guns on the hip course you have to have a permit. Terrorist threats serious even if your joking you can get nailed on that one.

"Terrorist threats" sounds like blowing up a government building or something similar to that. I wonder how arguing with a neighbor makes someone into a "terrorist"?

Yeah, the courts got me on that one before..
It simply means to terrorize someone by threatening to harm them, ie:
"I'm gonna beat you up"..
Even that is a "terrorist threat".

I think it's better to pixilate. The man was arrested, and not much other information in provided. From the story it's not actually clear what happened--it seems like an argument or confrontation between two people, the nature of which is unknown. Aren't we supposed to be innocent until proven guilty? Nothing points at this guy being a danger to anyone else. Is he a known violent criminal? And while I personally don't like these tasers and pepper spray, people are allowed to own actual guns, so I can't see how it's a real issue.

This guy is my co-worker at UCSB for many years. Nicest guy in the world. Have no idea what he was thinking or why he did what he did.

We get a perp photo, and it’s pixilated.
Why not protect local citizens by posting a photo, instead of protecting the perp?

Out of curiosity, which of his weapons is considered a firearm for 'brandishing'? Any? All? Google says stun-gun requires close contact, while Taser works from further away. Never heard of a pepper gun before. Quite an array of don't-F-with-me stuff.

Why is the perps face Pixelated? Photograph seems to be taken from public. No expectation of privacy in a public place.

Absolutely correct--no legal protection on that.

Is this the same clown from last week's standoff?

Sounds like that's the apt. the street is on 1900 Elise Way.

That's a private road back off of Elise Way therefore their confusion, apts or condos.

Apparently it's on Reef Court, just heard it on the AMR frequency

Witness saw the subject run back into his residence at 217 Elise Way.

PD officer in charge states subject has been involved for the same before.

I just read a man on FB