Curtis Skene, left, and Kris Kirkelie founded Partners in Community Renewal to study how Montecito's creeks and bridges  can be modified to reduce the future loss of life and property in recurrent debris flows. Larry Gurrola, a Santa Barbara geomorphologist, is the project manager (Photo by Melinda Burns)

What if the boulders and debris that obliterated whole neighborhoods in Montecito on Jan. 9, 2018 could have been captured in the creeks?

Partners in Community Renewal, a new nonprofit group in Montecito, called RenewSB for short, is on a mission to accomplish that seemingly impossible task. Drawing on experts here and beyond California, the group has embarked on a $4 million, four-year study of the geology, hydrology, topography and violent history of debris flows in Montecito.

“This is my home; it’s our home,” said Curtis Skene, the executive director, a debris flow survivor and a co-founder of RenewSB with his partner, Kris Kirkelie. “I just feel that when you have a place that’s your home, you have to defend it; you have to rebuild it, you have to fix it. When I got out after 1/9, I kept saying to myself, what’s the opportunity in this big problem?”

RenewSB will design a masterplan for Montecito’s five main watersheds, encompassing Montecito, Cold Springs, Hot Springs, Oak, San Ysidro, Buena Vista, Romero and Picay creeks, showing how and where streams and bridges can be modified to reduce the future loss of life and property, Skene said. The final blueprint will include recommendations for a number of new creek basins that can trap boulders and fallen trees, Skene said. All of the group’s findings will be turned over to county Flood Control.

“It’s a big undertaking; you really have to look at the entire system,” Skene said. “We will do the study, identify areas where we can do things, and then go after acquiring properties. All of this ends up having to be a community discussion. We would like to talk to anybody and everybody.”

RenewSB is the second local non-profit group to grapple with Montecito’s existential dilemma – a wealthy enclave of 11,000 people living in a high-hazard zone. The very ground under their feet is an alluvial fan, laid down through the millennia by massive debris flows that roared out of the canyons of the Santa Ynez Mountains, most recently on Jan. 9, 2018.

Since the disaster, another Montecito non-profit, the Partnership for Resilient Communities, has raised nearly $6 million for the installation and future cleanout of six steel-wire ring nets in the upper stretches of Cold Springs, San Ysidro and Buena Vista creeks. The last two of the six nets were installed last week. The Partnership is asking the county for a four-year extension of its ring net permit. The county had granted a one-year emergency permit for the project; it expires on Dec. 21.

In search of longer-term solutions, RenewSB has finished a preliminary study of San Ysidro Creek; next, it will focus on Montecito Creek, where 17 people died below East Valley Road in last year’s disaster. The actual implementation of the masterplan by the county could take 10 to 15 years and tens of millions of dollars in private and public funds, including state and federal grants, Skene said.

Early next year, he said, RenewSB will begin reaching out to landowners who lost their homes on Jan. 9, 2018; they may want to sell all or part of their creek-side properties for debris basins, instead of rebuilding in the path of danger.

“It requires somebody like us to approach those neighbors,” Skene said. “The county can’t do it.” 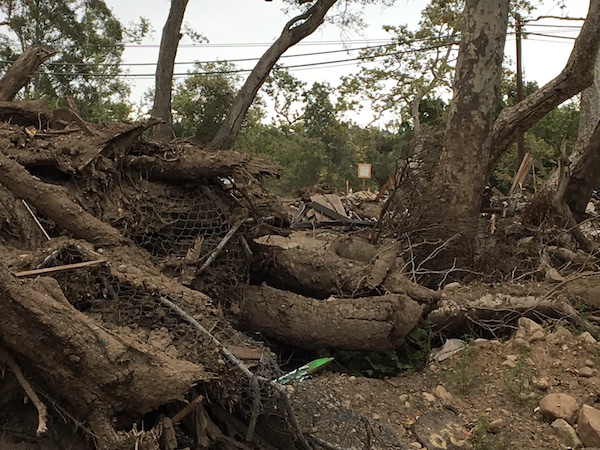 Downed trees formed much of the debris that jumped the creek banks and surged through Montecito on Jan. 9, 2018 (Photo by Melinda Burns)

Geologists say there is a higher risk of debris flows in Montecito through 2023 in the wake of the Thomas Fire, which laid waste to the mountainside in late 2017 and early 2018. Still, the community is approaching its third rainy season since the fire with a greater margin of safety than in January, 2018. Six ring nets are up, and, according to the Montecito Fire Protection District, 80 percent of the former vegetation has grown back on the slopes above town.

On Dec. 5, Montecito Fire and the county Office of Emergency Management will release a new “red zone” map showing the properties at highest risk of damage from debris flows or debris-laden floods this winter. The map will be displayed at a meeting at the Montecito Union School, beginning at 5:30 p.m.

Historical records show that seven debris flows and debris-laden floods have hit Montecito since 1914; that’s an average 15-year interval between disasters. Last year’s was the deadliest.

In a recent study, the U.S. Geological Survey estimates that 888,000 cubic yards of mud, rocks and trees were deposited in Montecito during the Jan. 9, 2018 debris flow. Adding in the debris that was removed from Montecito’s four existing debris basins, and the mud that flowed offshore, the total volume comes to about 1,004,000 cubic yards. 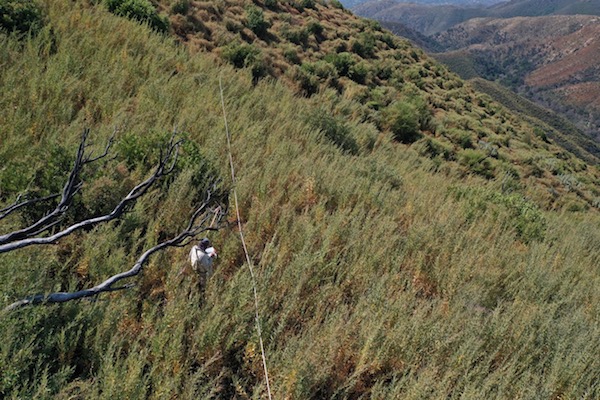 According to the Montecito Fire Protection District, 80 percent of the chaparral that burned in the Thomas Fire has grown back on the steep slopes above Montecito and Carpinteria. Jonathan "Yonni" Schwartz, coordinator of the Los Padres National Forest Burn Area Emergency Response team, is shown here taking measurements of the vegetation in Cold Springs Canyon in August, at the end of the growing season. (Photo by Kevin Cooper)

For comparison, that’s enough mud and debris to cover 23 miles of the Highway 101 corridor three feet deep, from Casitas Pass Road in Carpinteria to Storke Road in Goleta.

On Jan. 9, 2018, the existing debris basins on Montecito creeks captured only nine percent of the total flow. Is it even possible to trap all the boulders and trees that would come down in a similar disaster?

Larry Gurrola, project manager of RenewSB, believes it is. He is a Santa Barbara geomorphologist who studies landforms, or the physical features of the earth’s surface.

In addition to siting potential new debris basins, Gurrola said, the group will identify where creeks could be dredged or contoured to slow down the momentum of a debris flow, while letting the mud flow downstream.

“As they come down, debris flows build up a snout of boulders, logs and trees that can be quite high,” Gurrola said. “There would be structures in the creek to break up the flow and reduce the height. I’m looking at it as an opportunity to bring in techniques used in other states and countries – Switzerland, Austria, Canada, Japan – and apply them here.”

During last year’s disaster, a number of bridges in Montecito quickly clogged with debris, effectively pushing battering rams of boulders into residential neighborhoods. Some of these bridges could be elevated or modified with hydraulic engineering to help “keep it in the creeks,” Gurrola said.

“It’s well-known these bridges are under-designed for debris flows,” he said. “They were designed for clearwater flows.” 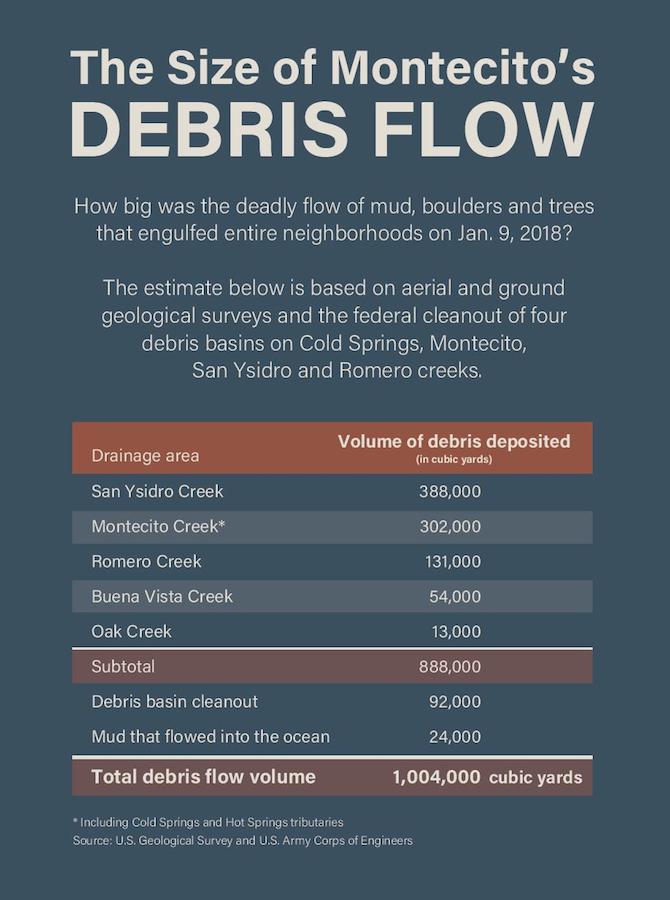 On Jan. 9, 2018, Skene witnessed the destruction of his childhood home at 1709 East Valley Lane as he took refuge in his backyard patio.

“A foot over there or over here and I would have been a statistic,” he said. Nearby, four people died when the river of mud, boulders and debris jumped the banks of San Ysidro Creek above Randall and East Valley roads. Throughout Montecito, 23 people perished.

During a massive debris laden flood in 1969, Skene had witnessed a river of mud rising outside his home as a boy of 12. After his narrow escape in 2018, he said, “I was saying to myself, ‘What the hell was I doing there? I saw this in ’69.’”

The new basin on San Ysidro Creek is expected to be in place by the fall of 2021, paid for in large part by the Federal Emergency Management Agency.

Seeing those results, Skene said, Montecitans from other neighborhoods asked him, “ ‘Would you consider a broader initiative?’” The result, he said, is RenewSB; the group has raised $2 million in pledges from individuals and private foundations to date, money that was targeted but is no longer needed for the Randall debris basin. In all, Skene said, the group will need to raise $2 million more to complete its watershed masterplan.

Skene and Kirkelie have been so busy, they only recently got around to demolishing Skene’s wrecked house. It was the last to come down on their block.

“We can take this traumatic disaster and turn it into a model for other communities not to overbuild, but to rebuild and renew,” said Kirkelie, a home designer who volunteers her time for RenewSB. “We’re looking for long-term solutions to historical problems.” 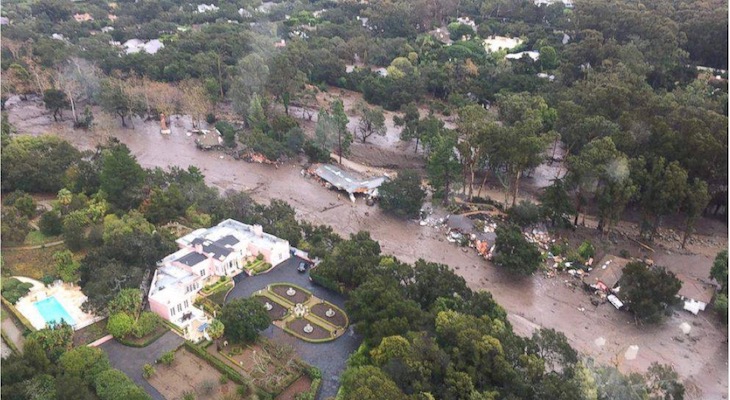 There was a great long investigative essay by John McPhee about thirty years ago, about similar problems in the San Gabriel mountains in LA: “The Control of Nature.” In the New Yorker, then later in a book. We are going to have to adjust. What makes this such a lovely place to live—a narrow coastal plain backed by a steep, chaparral covered mountain range—is also what makes it susceptible to fire and flood. And climate change is going to make “controlling nature” more and more costly, and in the end a losing battle. We aren’t going to be able to engineer our way out of this, long-term.

Don't tell me these folks want to rebuild in the flood plain! After having experienced 2 debris flows?
How does that line go: the definition of insanity...

Mr. Skene deserves our thanks for helping to protect our community. The existing debris basins above Montecito are too small by a factor of ten relative to the amount of debris that came down on January 11, 2018. These are massive projects- it will take time, money, and dedication to get them done. As a related matter we also need to study the debris basin capacity above the city of Santa Barbara and take similar steps if necessary, before the next inevitable debris flows come down along Mission Creek.

We could only wish the 101 had 6 lanes all the way from Casitas Pass to Storke Rd! Maybe Renew can make that part of their mission to get that done as an emergency evacuation route for Montecito residents only. This effort is going to take a lot of money and as the years pass with no additional disasters the urgency will recede. But if Renew can get it done, that would be pretty fantastic.

Pitmix, World Peace would be great too... but neither is looking very promising. The Geological, eminent domain, and construction costs, preclude this. Do not forget that it was precisely the Montecito folks who prevented the freeway widening 20 years ago, when there was abundant funding. It is now costing way more, there are fewer Federal funds available and we have had decades of congestion in the mean time. If Montecito Billionaires want to pay for, and make this happen great, however their Greed rules the day, that is who they are.

Great article! It sounds like RenewSB is doing some outstanding work. I hope their solutions are implemented quickly and succeed in protecting the community from future debris flows. I would strongly encourage a similar undertaking to protect the city of Santa Barbara.

Melinda, You are a fantastic reporter, doing a wonderful job of keeping us informed about the Montecito debris problems. Thank you. Curtis Skene's father was a highly respected 10 goal polo player (as high as you can get). I am sure Bob Skene would be extremely proud of his son for grabbing the bull by the horns to help resolve this drastic debris problem. I grew up in Montecito, 4th generation, and have deep concerns for the community. Thank you Curtis and Kris Kirkelie, I consider you both heroes.

I read that one in the

I prefer the daily status

The very first page I visit

My dad has stage 3 COPD and

Thomas V Smith did a great

Actually anyone who has

Actually, I think it wouldn't