Once a stray on the streets of Ventura, Search Dog Waffles shows off his agility skills on the rubble, that he learned at the Search Dog Foundation in Santa Paula, similar to what he will face when deployed to disasters around the world as a live find search dog.

With friends and family cheering them on, six new Canine Disaster Search Teams joined the elite roster of urban search and rescue responders at the Search Dog Foundation’s (SDF) National Training Center on Friday, September 27, 2019, including Waffles, a beautiful Belgian Malinois and former local stray, now ready to serve the Santa Barbara community and the world as a disaster search dog.

Waffles did not have a great start in life as he was found wandering the streets of Ventura, CA, before being taken to Ventura County Animal Services (VCAS) in Camarillo, CA. Though he was adopted out twice, Waffles was returned both times as he was “too much to handle” for an ordinary family. 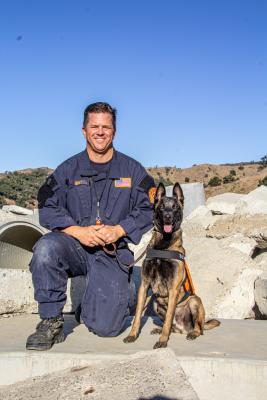 Luckily, a SDF and VCAS volunteer noticed the energetic young dog at the shelter and reached out to SDF’s recruitment team. Soon, Waffles was easily running across the rubble, impressing SDF’s trainers with his hunt and agility skills.

“Originally his energy and drive was unfocused and therefore he showed a lot of frustration – something we like to see a little of, but Waffles had more than his fair share,” remembers SDF Trainer Emily Hodges. “With some extra effort toward keeping his mind busy, even with some fun and silly tricks, Waffles has learned how to channel his energy and stay calm and focused but don’t be fooled, when it comes to searching, Waffles is a powerhouse!”

Completing his transformation from rescued to rescuer, Waffles found his forever home when he was partnered with his firefighter-handler, Captain Eric Gray of the Santa Barbara County Fire Department on September 27. A veteran canine handler, who just retired his first SDF-trained search dog, Riley, earlier this month, Eric is looking forward to bonding with his new partner and continuing to serve Santa Barbara, the country, and the world. 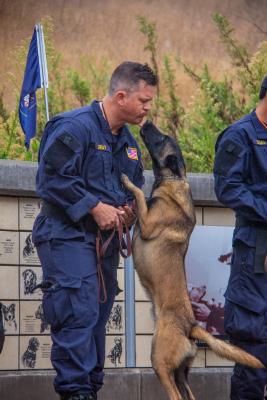 Waffles will join Eric as part of Santa Barbara County Fire Department as well as part of California Task Force 2, based in Los Angeles County. Their task force is one of only two of the 28 federal task forces in the country that are able to deploy internationally.

Eric and Waffles, as well as the other five new teams that graduated Friday, will follow in the foot and paw prints of generations of SDF-trained search teams who came before them to prepare for federal and state certification. After attaining certification, the teams will be eligible to deploy with their respective task forces across the country in the wake of disasters such as earthquakes, mudslides, and hurricanes, searching for survivors in the rubble and debris. 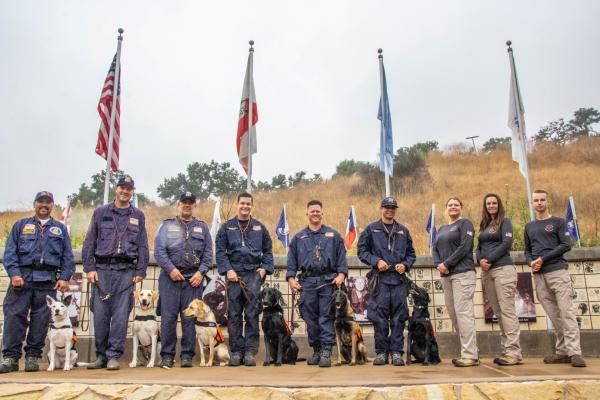 These handlers spent the past two weeks in intensive academy-style training to master the basics of canine handling, as well as more advanced theories on scenting and search strategy. Three handlers, Eric Gray, Steve MacDonald, and Damon Wirth, are veteran handlers who received the leash to their second search dog partners from SDF. Even prior to this Handler Course, the three new handlers, Travis Calka, Sean Quigley, and Rudy Valencia, have trained for months with their task force teammates and SDF-trained search dogs at their home training sites. After working with several of the 15 canine candidates currently in training at SDF, the handlers were partnered with their new search dogs in a special “passing of the leash” ceremony Friday morning.

“These dogs are incredibly hard working, fun-loving and an absolute pleasure to work with,” shared SDF Canine Training Manager Mandy Tisdale. “Seeing them bond with their new handlers throughout the last two weeks of our Handler Course has been a true privilege and while it’s bittersweet to send them home together, we look forward to all the good these new canine disaster search teams are going to provide to their communities, the country and the world.”

Every search dog that graduates from SDF’s training program stays with his or her handler for life. Handler and canine are together virtually 24/7, including at the fire station during regular shifts, so they are ready to respond at a moment’s notice when needed. At home, though search dogs are working dogs, they are integrated into their new families and are well-loved at home too.

The Search Dog Foundation is where rescued dogs learn to be rescuers, providing a training ground for search and rescue teams throughout the nation to work with their canines in an environment that simulates real disaster conditions such as a train wreck, earthquake-stricken buildings, a freeway collapse, and immense rubble piles It is the first training facility in the U.S. dedicated solely to first responders and their canine partners who risk their lives to make sure no one is left behind in the wake of a disaster.

SDF’s canine candidates train daily to prepare for their graduation days, usually within 8 to 10 months of entering the training program. These are often rescued dogs with the insatiable toy-drive and extreme athleticism needed for disaster search. Under the guidance of SDF Trainers, the canines learn the obedience, agility, and search skills they’ll need to find people buried alive in the rubble and aftermath of disasters.

Founded in 1996, Search Dog Foundation (SDF) is a nonprofit, non-governmental organization based in Santa Paula, CA. Its mission is to strengthen disaster response in America by rescuing and recruiting dogs and partnering them with firefighters and other first responders to find people buried alive in the wreckage of disasters. SDF pledges to support each of these teams through training and medical coverage for the entire life of each canine, all provided at no cost to their task forces and departments. The organization was founded by Wilma Melville, a retired school teacher who was deployed to the Oklahoma City bombing in 1995 with her FEMA-Certified Search Dog, Murphy. Returning from the deployment, she was determined to do something about America’s severe shortage of Canine Disaster Search Teams, and created SDF to address this problem. Since then, SDF has recruited hundreds of rescued dogs, and trained over 180 Certified Search Teams that have deployed to 192 disasters and missing person searches.
Login to add Comments

This is a very nice warm and fuzzy story, when was the last time that these pups found live victims? Most disasters, especially those oversea, the teams are taken into these disaster areas long after victims could be viable due to logistics and politics. It's sad to think but the same could be said for our local disaster, the dogs unfortunately did not find anyone. It was the other search dogs that found the dead still within the area. So thankful for all the work these dogs do, regardless the benefit.

Just want to note that the Search Dog foundation won't take pit bulls or their mixes in their program. A friend of mine had a dutch shepherd pit mix that had the drive and heart for the program but when they tried to get SRF to evaluate him they wouldn't. They would never say exactly why but later on someone told them the reason was that they don't accept certain breeds. The supposed rationale is that some jurisdictions have outlawed those breeds and so those dogs couldn't be used to respond to a disaster in Denver, for instance. Personally, if the Denver area has a major disaster, I think the last thing they would be worried about are the breeds of the dogs being used to locate victims and trapped survivors.

Say what you want about pit bulls, this dutch shepherd mix would go through a wall to retrieve a ball, which is one of the characteristics that they want in their dogs. He also had a hard time finding a home that met his work needs and finally ended up with a young couple that trains for triathlons. Finally he is satisfied with the exercise that they give him.

I believe I read Pit Bull terriers and mixes thereof are the most common breed in California. I won't speculate why, but I think the answer is pretty clear. I had to drive a stray one off by kicking it several times in the Green Thumb parking lot in Ventura when it charged a woman, knocking her to ground and biting her; fortunately she was wearing enough clothing that no puncture wounds occurred, but the poor woman was traumatized. I love dogs and have owned at least one since I turned 18 many years ago. Dogs respond to love and affection and almost all breeds reflect how they were raised and how they are cared for. Unfortunately, the love and affection part seems to be in short supply for many pit bull owners.

Pits are mostly ill bred mutts and almost every stray that finds its way into the shelter is an emotional and behavioral mess. They do not make good S&R dogs as they are not hunters, retrievers nor solid scent dogs. They make good watch dogs and arm candy for gangsters who wanna look tough and if raised correctly, good pets. But for most people and jobs, they are not the right breed nor the right dog.

Very nice story! The black dog in the center of the group (fourth from left) looks like a Flat Coated retriever - another wonderfully affectionate and intelligent breed that you don't see many of. Way to go Waffles, and It would nice to hear about the backgrounds of all your buddies there. Time to head to the Post Office and get some "Military Dog" commemorative stamps!

What a great story, thanks for sharing, it made my day. :-)

Kind of surprising that a Belgian malinois makes a good search and rescue dog. They tend to be more aggressive than German shepherds. The only Belgian malinois I've known were trained as guard and attack dogs. There used to be a woman who walked a group of Belgian malinois on the beach at Butterfly. She was, for all the world, like a drill sergeant. Her dogs were hyper obedient. That said, the Belgian malinois are known to be super smart, so hooray for "Waffles" as a great addition to the S&R team.

They are the ubiquitous police dog. They are an incredibly smart, loyal, focused and trainable breed. The very traits that make them great S&R pooches.

This is wonderful! I love happy endings!

Agree with Flicka. Disney couldn't write a more heartwarming story.
And a good reminder that, despite or because of our different abilities, we all just need to find our niche.

What a great story this dog has, from being homeless and wandering the streets to being a productive member of society and having a forever loving home. Congratulations Waffles.