The bill passed with bipartisan support in the House of Representatives on Wednesday as part of the Protecting America’s Wilderness Act, legislation aimed at preserving public lands.

“Protecting our environment, enhancing public safety and growing our economy are not mutually exclusive. The passage of the Central Coast Heritage Protection Act proves this, and it’s a huge step forward for all of us,” said Rep. Carbajal. “Our Central Coast is the most beautiful district in the nation and this bill ensures our public lands, like Los Padres National Forest and Carrizo Plain National Monument, will be preserved—for our economy, for our environment and for future generations.”

“This legislation will bring to a successful conclusion over 20 years of effort in Carrizo Plain National Monument to preserve the Caliente Range with its 1,000 year old juniper trees, the Soda Lake bottomlands with their strange clay dunes, and the Temblor Range shrublands which will have no counterpart in the National Wilderness system,” said Neil Havlik, Carrizo Plain Conservancy Director.

“The designation of the Condor Trail by the Central Coast Heritage Protection Act will provide an unparalleled recreational experience.  But, the societal benefits of the Condor Trail designation run much deeper.  Ultimately, a trail is more than a physical path on the ground.  It is a path to self-discovery, renewal and to re-connect one’s body with the land.  And, a long-distance trail is more than a means to traverse a wide range of landscapes.  Such trails provide a sense of connectivity and continuity that is so often missing in our fragmented, disconnected world.  Long-distance trails tie together the many diverse communities, both social and biological, that are part of, and adjacent to, such trails. It is at this deeper level of meaning that I understand the most important ‘why’ of the Condor Trail,” said Christopher Danch, Director of the Condor Trail Association.

The bill will head to the Senate and, if passed there, will be sent to the President for final approval. 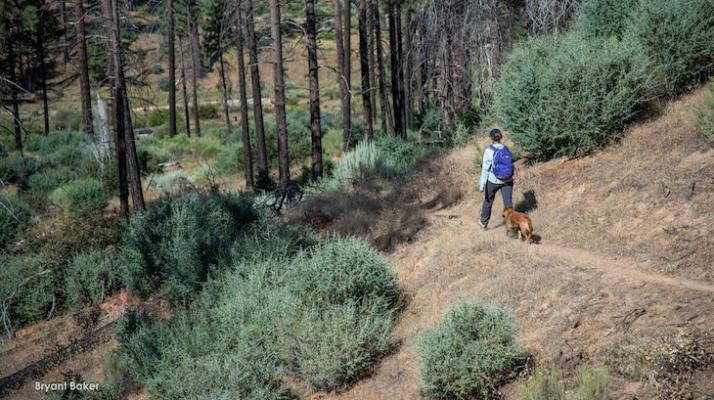 First step in a long process. But maybe by then we will have a new president?

Hi. Can you help me? What is being protected and from what? I suppose I understand preventing excessive drilling and mining may be good. But what else is protected? And what is it protected against? It seems to me that most of this area on the map is in the middle of know where and will stay that way. I truly appreciate the respect for nature and all but I'm not sure what the outcome of all this is.

Basically closing off our lands unless you are able bodied and have lots of free time for a self discovery backpacking trip, lol. Wilderness do not allow mechanized equipment(bicycles, chainsaws for brush clearing, any type of vehicle etc).

Haha, yes, Stoker the Coker indeed — I used to work (early ‘80s) with a woman who dated him. He was quite the debauchee.

Stoker has a very long hard partier reputation. Back in the day....

Thank God for Salud, because the Orange Man with his minions like Mike "The Midnight Coker" Stoker will do all they can to return the once pristine environment to the Dark Side of fracking, coal Big Oil.

Yeah, yeah, we got it the first time Salud - a piece of meaningless vanity legislation ginning up free publicity right before your upcoming election campaign.

Salud is a natural when it comes to turning a meaningless legislative action into a badly disguised 11th hour campaign publicity stunt.

Not a fan of the natural world, eh?

Salud is such a waste of space. Nice photo op with 40 people.

A nice thought, but a

And out US oil reserve is

I certainly appreciate the

I look on the bright side:

SoCalGas from time to time do