Among “Best National Universities,” which includes both public and private institutions, UC Santa Barbara placed No. 28.

UC Santa Barbara’s College of Engineering is ranked No. 18 among public universities on the U.S. News & World Report list of “Best Programs at Engineering Schools Whose Highest Degree is a Doctorate.”

In addition, UC Santa Barbara is ranked No. 5 among public universities — and No. 10 overall — on the magazine’s list of “Best Colleges for Veterans.” Among public universities, UC Santa Barbara placed No. 15 on the “Best Ethnic Diversity” ranking, and on the list of Top Performers on Social Mobility, the campus ranked No. 12. Social mobility measures how well schools graduated students who received federal Pell Grants (those typically coming from households whose family incomes are less than $50,000 annually, though most Pell Grant money goes to students with a total family income below $20,000).

Within the University of California system, only UCLA and UC Berkeley ranked above UC Santa Barbara on U.S. News & World Report’s list of top public schools.

The magazine has released its annual college rankings online at usnews.com/colleges. The “Best Colleges 2022” guidebook goes on sale today.

To rank colleges and universities for the Best Colleges 2022 guidebook, U.S. News & World Report assigned institutions to categories developed by the Carnegie Foundation for the Advancement of Teaching. UC Santa Barbara’s category of national universities includes only institutions that emphasize faculty research and offer a full range of undergraduate majors, plus master’s degrees and doctoral programs.

UC Santa Barbara, which this year experienced a highly competitive admissions process, continues to attract the best of the best. Among prospective freshmen and undergraduate transfer students, academic qualifications and diversity remain exceptionally high. For the 2021-22 academic year, the average high school grade-point average of applicants admitted is 4.36. “Students admitted showed tremendous resilience while adapting to different learning environments due to COVID-19,” said Admissions Director Lisa Przekop. “They showed creativity, compassion, adaptability and intellectual vitality. These students are ready to join the UC Santa Barbara community and they will make positive contributions as we learn from our experiences over the past 18 months.”

The rankings in the Best Colleges 2022 guidebook are based on data U.S. News & World Report collects directly from colleges and universities, as well as from other sources. Additional data was obtained from the American Association of University Professors, the National Collegiate Athletic Association, the Council for Aid to Education and the U.S. Department of Education’s National Center for Education Statistics. The magazine evaluates and analyzes data on various indicators of academic quality and assigns a weight to each factor based on its relative importance. It then tabulates composite scores and ranks institutions against others in the same peer group.

Westmont Ranked Among the Nation’s Best 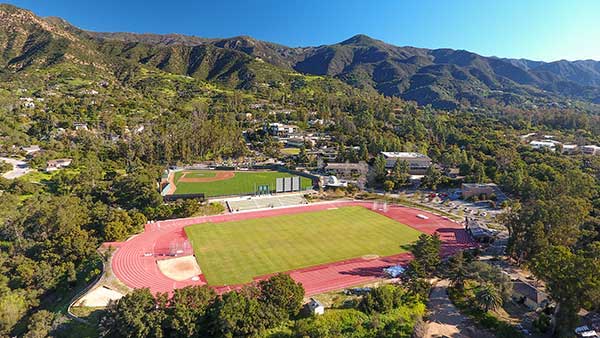 Recent college and university annual rankings continue to affirm Westmont as one of the top Christian liberal arts colleges in the nation.

Payscale’s 2021 Best Universities and Colleges by Salary Potential shows that mid-career Westmont alumni, including those with a graduate degree, earn a median income of $127,700 after more than 10 years in the workforce. This places Westmont in the top 7 percent nationally among all four-year bachelor degree institutions with the highest ranking among all members of the Council for Christian Colleges and Universities (CCCU).

Westmont remains in the top tier of National Liberal Arts Colleges in the 2022 U.S. News and World Report rankings tied at No. 114. Westmont improved its percentage of classes under 20, and under 50. Westmont’s Student Excellence Score, which includes SAT/ACT standardized tests and high school class standing, jumped 13 points from last year.

Westmont is No. 186 in the Wall Street Journal/Times Higher Education College Rankings of more than 800 colleges and universities. Westmont has gained 78 spots in the WSJ rankings since they began in 2017. Westmont is No. 66 in the Best Liberal Arts Colleges in the United States 2021 ranking.

Westmont is No. 2 in Niche’s 2022 Best Colleges with No Application Fee in California.

U.S. News & World Report rankings may not be an accurate reflection of the quality of a school. As much as I love all that UCSB does for the community (well-educated graduates coming into the local hiring pool, community summer camps, arts & lectures, notoriety for the community, the list goes on...), I don't put much stock in the rankings. The U.S. News & World Report rankings are so influential that schools spend significant resources figuring out how to improve their score. The steps they take don't necessarily mean an improved educational experience for students. It's a hazard of relying on models and algorithms to evaluate everything and make decisions - schools, job applicants, a convict's likelihood of recidivism, a loan applicant's chance of defaulting, product reviews on Amazon.

"... rankings are so influential that schools spend significant resources figuring out how to improve their score." Fact or opinion? If it's fact, what is your source?

It's fact. Here's an excerpt from a 9/10/2013 article in The Atlantic titled Your Annual Reminder to Ignore the U.S. News & World Report College Rankings.

"Because the rankings have a popular audience, they encourage colleges and universities to game the system – i.e., to do what they can to raise their place in the rankings by, for example, spending lots of money on things the U.S. News formula deems important or by aggressively increasing the size of their applicant pool so they can turn away a higher percentage of their applicants, thus showing themselves to be 'more selective' and thereby raising their rank. Moreover, some schools simply cheat. They actually lie when reporting numbers to U.S. News. Claremont-McKenna College is one of the most recent colleges to make it into the news for cheating the system, when it reported last year that a senior administrator had been sending U.S. News false SAT figures for years. "

All that talent, and we still know so little about "covid". Wish we could see more direct practical benefit from our long-standing investments in higher education.

Add up how many students are enrolled in the top colleges and accept the fact it is 99% a waste of time to even apply. Find a good public institution and apply yourself to a major, that will actually advance your goals in life. Or find a trade school to teach you how to make a living, while you pursue your less renummerative dreams.

It's great that UCSB is great. But it's a not-great sign for the local kids who can only afford to live at home and go to school. After SBCC, then what?

30% of UCSB transfer students are from SBCC. There is a guarantee transfer from SBCC to UCSB with requirements such as; a 3.4 GPA in UC-transferable classes and 30 UC-transferable semester units.
A great and affordable college choice.