Scroll through the photos above and see below

Hundreds of visitors to Montecito's Butterfly beach on January 22, 2023, a favorite seascape of Royals and Movie Stars, were confused, then awed, to see rocks strewn all over the walkways, sidewalks, street and sand, further altering a landscape already dramatically changed in recent weeks due to the atmospheric river/storm surge.

The culprit was a "King Tide", which  sent waves and rocks catapulting over the sea wall in a never-before-seen surge in front of the luxurious Four Seasons Biltmore Hotel and Coral Casino Club. Notably, much of the debris and shells that have been on the beach in recent days are gone: rocks are now being reigning feature.

King tides occur when the orbits and alignment of the sun, moon and Earth merges to produce the most gargantuan tidal effects of the year.

According to the Environmental Protection Agency's website, "rubble on the road and pro-surf worthy waves predict the way our landscapes will be in the future: King tides preview how sea level rise will affect coastal places. As time goes by, the water level reached now during a king tide will be the water level reached at high tide on an average day."

More regal tides were expected Monday and Tuesday, although not quite as high as Saturday's stone thrower. 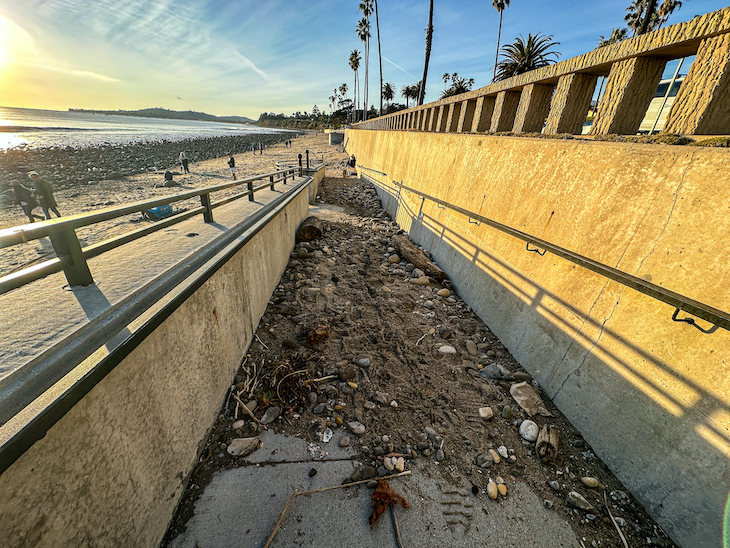 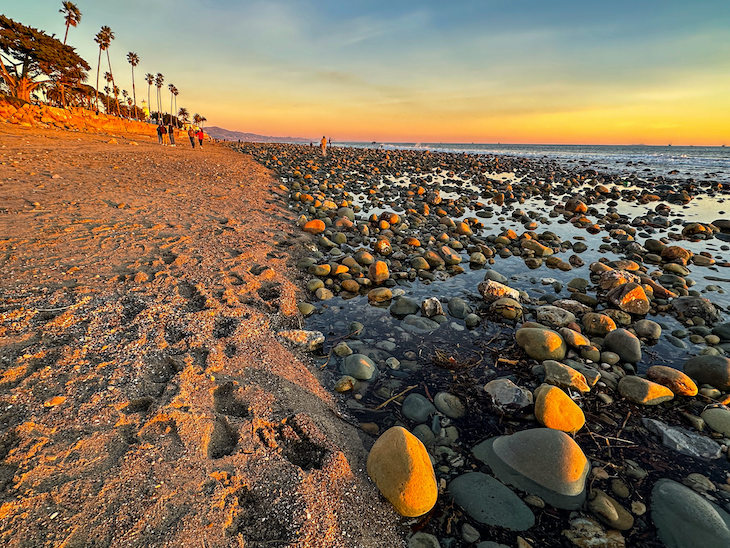 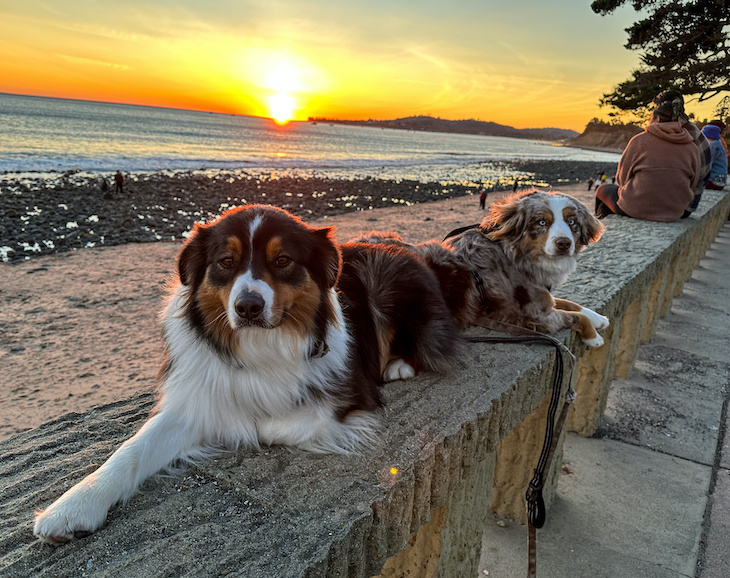 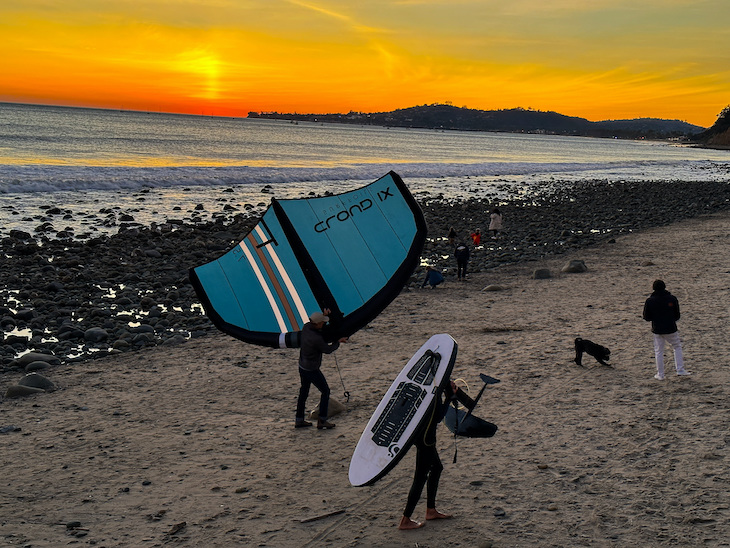 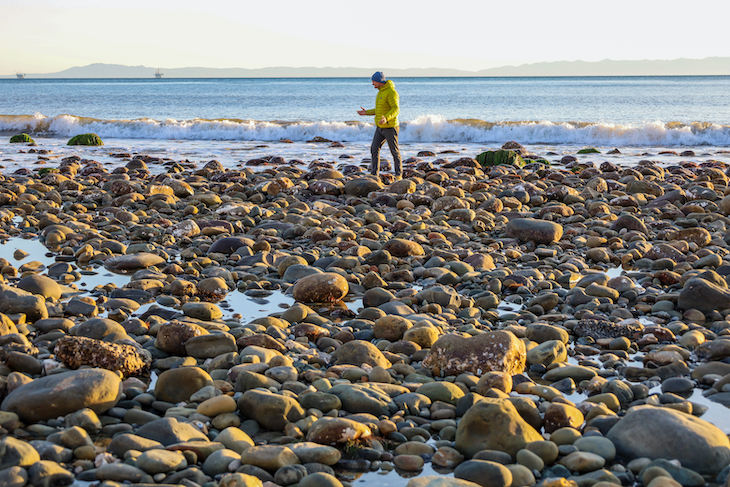 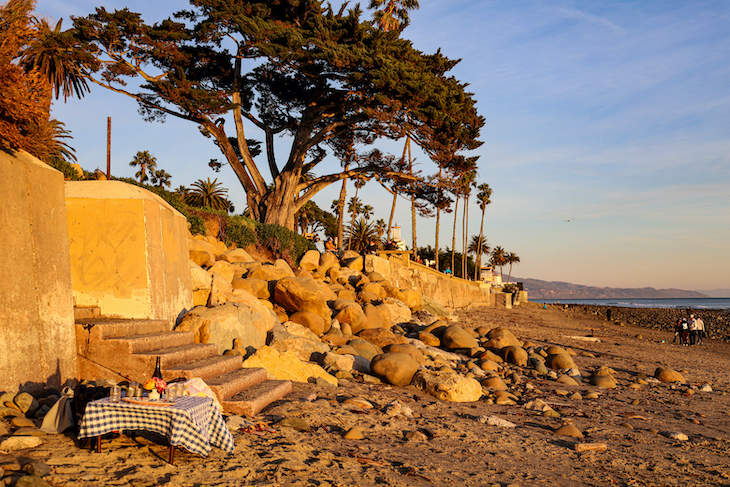 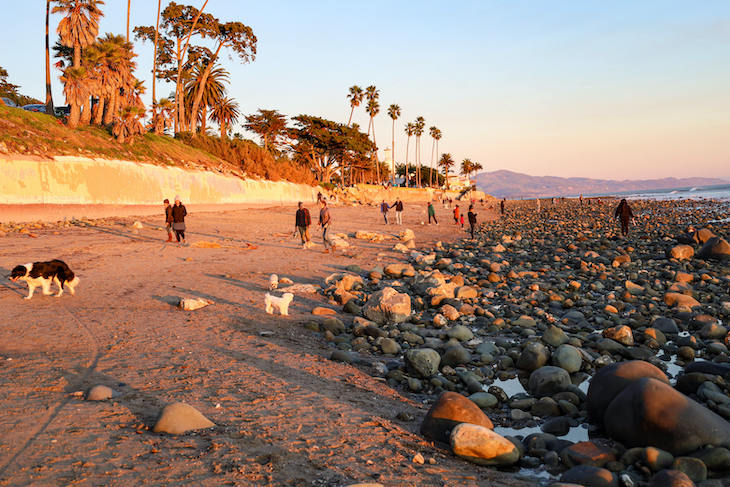 I agree rebuilding in areas which are prone to high damage creates great ongoing expense. Instead we should take that money and rebuild our wetlands, rivers, streams.
It is never wise to interfere with the natural flow of water building homes in the area because water will always win.

Coastal residents can reduce the damage done by a storm surge by protecting local wetlands. Wetlands, such as swamps, estuaries, and mud flats, act as sponges for tropical cyclones. As the cyclone makes landfall, the marshy land and plants absorb the water and the energy of the storm surge. Silt and swamp vegetation prevent the most intense part of the storm surge from hitting homes and businesses.

Estuaries are such an important part of our natural environment that the U.S. Environmental Protection Agency (EPA) created the National Estuary Program in 1987. This program seeks to improve the quality of estuaries to protect important wildlife habitats, public water supplies, and coastal regions affected by severe storms.

The development of coastal wetlands for housing, industry, or agriculture reduces the natural barrier that wetlands provide. Communities can protect themselves against storm surges by maintaining healthy coastal wetland ecosystems.
https://education.nationalgeographic.org/resource/storm-surge

A lot of the gunk and debris deposited at Goleta City Beach and elsewhere does not magically disappear back into the oean on the next high tide. It washes out to sea and them comes back onshore farther south as the tide comes back in. Go look at North Rincon (Bates) Beach and the Ventura County beaches farther south. They need a cleanup fast from the bacteria, snakes and rats now living among the tree lumber deposited there.

Run the trucks to the waterside just east of bird refuge outlet. Save twenty miles on round trip. Reduce footprint.

In the early to mid 70's when I was attending SBJH and SBH, I use to body surf there at Butterfly Beach with my friends that resided in Montecito. I guess that would be hard to do this coming spring and summer when the waves are good with all those rocks there.

Very unnatural to me to have to trap (debris basins, nets!), dig out, and truck all this earth that’s coming down from the mountains and lay it somewhere else. Talk about Carbon footprints. They’re even running street sweepers all around the Goleta beach entrance because of the mud footprints. Add insult to injury? Goleta Beach Park is closed to us until who knows when.

Couldn't agree with you more Sac.

BASIC - great points. The existence of the crap they're trucking to our beach is unnatural. Normally, it would have flowed downhill into the Cito beaches, were there no homes along the creeks. But.... don't dare complain about it, lest you be "shamed" by non-local know it alls who condescendingly lecture us about how it's "necessary" and actually "helpful" for our beach. I don't know a single Goleta local who shares that sentiment.

Thanks for all the photos!

The sand will be back.

Seen before: 1977 (or 78) the original sandstone railing/wall along that stretch was blasted to smithereeeeeenz. That same storm event also, the rather short pier at Coral Casino was washed away (or as my father would say, "warshed away"). Not new these "killer" King Tides.

It was not the king tides alone, but the combination of high tides and the arrival of a giant west swell.

Yes seen before. In 1983 I personally watched the ocean surge onto the Biltmore lawn and deposit a gigantic round buoy. A boat ended up on Channel Drive.

FERNALDPOINT: Remember how beautiful and fine that old stone wall was? I've always disliked the "replica." So ugly. But ----- it held up didn't it?

I remember that major storm of 1983. Going down to Channel Drive in the morning after the storm, there was a big tree down at the entrance to the Biltmore and there were rocks the size of softballs all the way across the street from the beach, on the Biltmore side of the road. That's not an exaggeration. Waves were hitting that bulkhead and water was shooting up as high as the tops of the palm trees. It was truly incredible.

The stone fence at oceans edge in front of the Biltmore was completely destroyed in 1983. The current one, pictured above with rocks scattered on the sidewalk next to it, is a replica of the original.

VOICE - I never said it did. There's a plethora of scientific proof about anthropogenic climate change. We're not devolving this comment thread into another grandstand for you to deny science.

I think the photos speak for themselves. Compare the damage in the last couple of photos in the link I posted showing the damage along channel drive in 1983 to the photos in this article from a couple days ago. The boulders, broken down biltmore sign and uprooted eucalyptus were a sight to behold.

1:12 is impervious to any facts contradicting his politically dictated world view.

Thanks for that link. Great shot of SBYC. Every time there is a storm, everyone thinks it’s the worst one ever. The 1983 season destroyed piers up and down the coast. So far, I believe Capitola’s pier is the only one damaged this season.

CHIP - please try to remember that "warming" isn't the only sign of climate change. Weather extremes can be high or low temp. Just because it's raining or cold doesn't mean climate change isn't happening.

Yes Fernald! The surge back in 1983 was much worse. Perhaps the last 40 years of global warming have moderated tidal surges in addition to causing below normal temperatures this winter. Here is a link to some news clippings with photos of the damage done back in 83.

1:40 - Nuke said "another city's beach," not "Goleta Beach is a Goleta City beach." Despite being carved out of the city legal limits, it still is considered "our city's" beach.

Goleta Beach is a city beach? Better tell the County of Santa Barbara.

NUKE - yeah, I hear you. Be surprised if these rocks don't get hauled out here as well.

Hahaha! I was thinking the same thing. I still don't know how it is legal for one city to dump its filthy storm sediment on another city's beach. Check out Goleta beach -- horrible!

Lazy summer swells will bring the sand back.

Ouch. Does not look fun to run (or even walk on). Will there be enough sand coverage this summer or is this the new reality for that beach?

What was the bright object in the sky (daylight) south of the moon on Saturday?

Bob reports Santa Barbara Police are responding to the scene of a man scene carrying a gun in downtown Santa Barbara.

[Update]: One person is injured from a vehicle rollover on Highway 101 north near the Gaviota rest stop.

DignityMoves announced its partnership with the County to launch DignityNOW Santa Barbara County, an initiative to create sufficient Interim Supportive Housing for everyone experiencing unsheltered homelessness.

Bob reports a broken window vandalism in the 600 block of State Street.

[Update]: A 20-year-old man was airlifted to the hospital after falling nearly 180 feet over the side of San Marcos Road.

SpaceX Pushes to Monday for Launch of Satellites

So here’s the deal…I met a dog recently and her story is worth sharing with you.