Jennie Olivas Guillen passed away peacefully on September 18, 2019 at the age of 97. She was born on December 27, 1921 in Lankershim, California which is now known as North Hollywood. Jennie lived all throughout the Los Angeles region working as a migrant farmer all over California before permanently settling down in Goleta and Santa Ynez. She had 11 children, 19 grandchildren, 34 great-grandchildren and 13 great-great grandchildren. 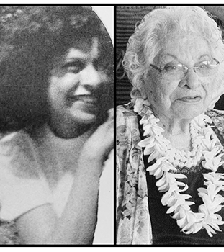 Jennie dedicated her life to bettering her community and to those around her. She did many things throughout her long life. Jennie was one of the first Spanish translators at General Hospital in Santa Barbara. She was a liaison between the Bureau of Indian affairs and the Chumash Tribe, making her an integral part in helping her people on the Chumash Reservation receive running water, adequate housing and healthcare. She helped to establish the original Chumash Bingo Hall, which is now the Chumash Casino. Jennie was an amazing woman that devoted her life to helping make others' lives better by working to establish a dental clinic on Milpas St. in Santa Barbara for low income families. She was also one of the founding members of the Community Action Commission (CAC) of Santa Barbara. Jennie also worked at La Casa De La Raza handing out food stamps to the poor and she sat on the board for low income housing in Goleta. While Jennie will be greatly missed by her family and friends the impact that she made for future generations will never be forgotten. She is survived by children; Henry Cruz (Columba), Steve Guillen (Becky), Dennis Guillen, Paulette Barrios (Leonard), Benny Guillen, and Jenny Reyes (Rick). She is preceded in death by her daughter; Judy Howe and son's; Nicky Guillen, Michael Cruz, Robert Cruz and Arthur Cruz.

Well EGGS, perhaps instead of

DUI and go to jail. Go get