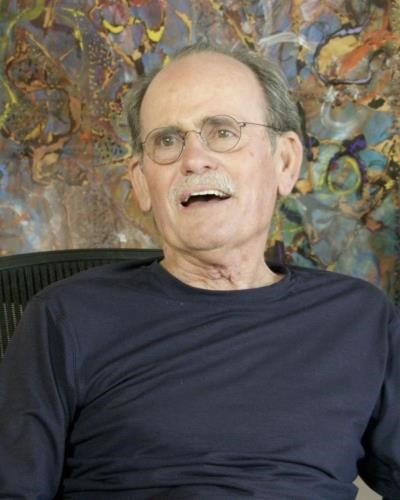 Jay McCafferty, one of Los Angeles's most important and convention-defying artists, died March 21 at his home north of Santa Barbara. He was 73.

Although commonly known as a Minimalist, he was also grouped with the Post-Minimalist tendencies of Conceptual and Process art. His working method remained constant-focusing rays of sunlight through a magnifying glass to achieve perforated surfaces of great variety; from early works resembling transgressive, cigarette -sized burns on various grounds and later to delicate, complex compositions on pigmented papers.

McCafferty was born and raised in San Pedro, California where he lived and worked for his entire life-with sojourns to his ranch north of Santa Barbara. As a young artist, McCafferty won the LACMA New Talent Award and received a National Endowment for the Arts fellowship grant. His art has been exhibited locally, nationally, and internationally, in well over one hundred exhibitions between 1971 and 2019. McCafferty's work is held in numerous public collections including The Getty Museum, the Los Angeles County Museum of Art and the Museum of Modern Art.

After graduating San Pedro High School, McCafferty studied for a brief time at Los Angeles Harbor College, in Wilmington. Subsequently, he attended Chapman College where he also studied on the World Campus Afloat before attending California State University, Los Angeles. There he earned a Bachelor of Arts degree in Art. In 1973 he received an MFA degree from the University of California, Irvine(UCI). At UCI, McCafferty studied with such artists as Craig Kauffman, Ed Moses and Tony Delap. His classmates included Charles Christopher Hill, John Knight, Richard Newton, Chris Burden and Alexis Smith.

McCafferty presented his first video exhibition, solo, in 1974 at the Long Beach Museum of Art. It was described by the Getty's Glenn Phillips as a "suite of truly humorous and poetic single-channel videos". At Harbor College from 1976 to 2019, McCafferty was an associate professor of art and head of the art department. For 30 years starting in 1966, he also worked as a lifeguard on beaches from San Pedro all the way north to Ventura County. During a teaching career spanning more than four decades, McCafferty taught and inspired multiple generations of artists, teaching everything from ceramics to painting to art appreciation.

He will be deeply missed by his friends and especially by Ellen Montgomery McCafferty, his wife of 41 years. Ellen wishes to thank Dr. Marston, Laura Guerrero , Susan Clark and Alex Velazquez from VNA in Santa Barbara for their extraordinary care of Jay. A memorial will be held at a later date. Please make any donations to VNA of Santa Barbara in Jay's name.

Thank you Tom. Another

We have gun laws. They just

According to close friends

How many times do people need

OK, so suspect was from