The injured owl that was rescued by the California Highway Patrol (CHP) and Santa Barbara Wildlife Care Network (SBWCN) is expected to survive.

The Ojai Raptor Center posted an update on Facebook Monday stating they received a lot of inquiries about the injured owl. It sustained serious impact from a collision with a car and as a result had significant internal bleeding as well as trauma to the face, nasal cavity and eye. Their initial prognosis was not good.

Over the weekend with a course of medication and supportive care the bleeding has subsided, the eye has made significant improvement and he/she started eating on its own! Based on the weight and body condition of this Owl it could either be male or female at this point, the Ojai Raptor Center Stated.

As of Monday, they are confident in announcing the Owl is going to survive.

For those willing to support the Ojai Raptor Center's rehabilitation efforts, they're asking for donations through Patagonia Action Works this month where all donations will be matched. Click here for more information.

CHP officers responded to Highway 101 northbound near Milpas Street in Santa Barbara and discovered the owl in the center divider of the freeway.

Gary, a volunteer from the Santa Barbara Wildlife Care Network (SBWCN), also responded to the scene and was able to safely capture and transport the owl to their facility.

The owl was then transported to the Ojai Raptor Center for further evaluation and treatment.

Big thanks to CHP and SBWCN for giving a hoot about local wildlife. 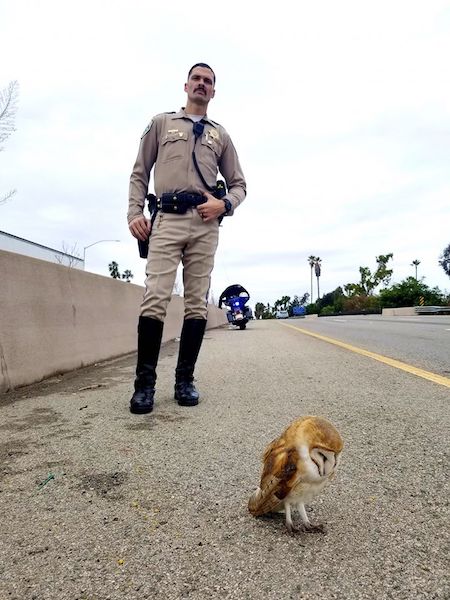 it was a tragic day for all

Forgive me for not being

I don't think that OOPS is

Not to say he's guilty or

Wash your hands, cover your