Eight local businesses and organizations were recognized at the 2019 CycleMAYnia Bike Challenge Awards ceremony that took place on June 6, 2019 at Goleta Beach Park. Overall 96 teams competed in the 2019 Bike Challenge making nearly 17,000 bike trips and traveling more than 61,000 miles in May. The total mileage was equal to traveling two and a half times around the earth, a distance that would emit 24.8 tons of CO2 if traveled by car.

The annual Bike Challenge is credited for demystifying the experience of using a bicycle to commute to work by helping everyday employees throughout the south coast take a leap and try riding their bicycles to work in a fun, competitive team challenge. Suzie Clark, an employee at Deckers Brands, remarks on competing in the Bike Challenge, “It’s been so fun discovering a new take on my daily commute. I’ve been wanting to take on the challenge of biking to work but was a little nervous. This month instilled so much confidence in my ability to (e) bike myself and my daughter to work and school safely and efficiently. I feel like I can keep this up as a real solution to not driving every day.” 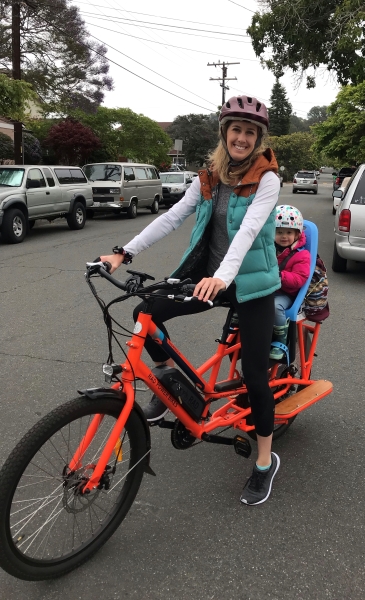 Suzie Clark with her daughter in tow, courtesy of Suzie Clark

The 2019 Bike Challenge awardees include the following: 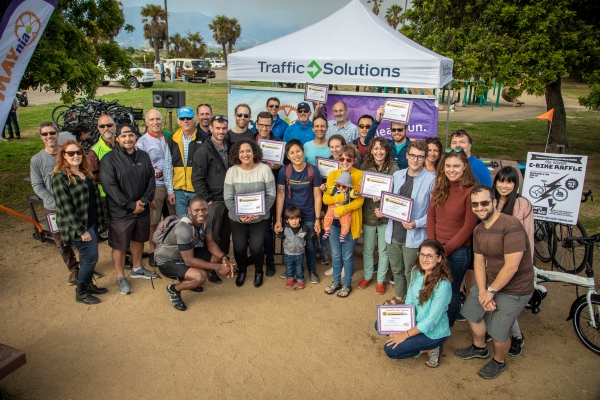 CycleMAYnia and the Bike Challenge provide an annual opportunity for community members to celebrate biking and connect over shared experiences. Kent Epperson, director of SBCAG Traffic Solutions, comments, “We have learned that team-based motivation brings coworkers and friends closer together and serves as a catalyst for new kinds of bike trips.”

At the event, staff from SBBIKE drew the names of three raffle winners for top-of-the-line electric bicycles in their Great E-Bike Raffle. Ed France, executive director of SBBIKE, told the crowd, “Bicycling is becoming increasingly accessible to people of all abilities, and increasingly convenient due to the emerging e-bike market,” and thanked raffle sponsors Bicycle Bob’s, Tern, and EbikeZZZ. 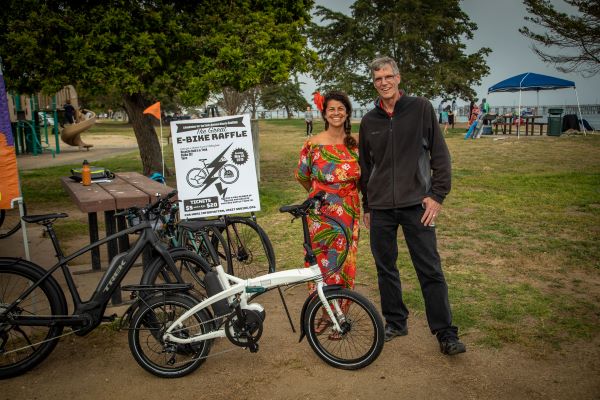 CycleMAYnia is a program of Traffic Solutions at SBCAG, offering 40 bike rides and events for people of all biking abilities throughout National Bike Month in May. It is made possible by Measure A and local sponsors for 2019: County of Santa Barbara, Community Environmental Council, City of Carpinteria, City of Goleta, Yardi Systems, Inc., Bicycle Bob’s, and SBBIKE.

Maybe the smug and entitled

I assume this is sarcasm

I liked Bennett too

No speculation is needed.