The First Ceylon International Film Festival (CEYIFF) kicked off at the Lobero theater Friday night.  That’s the first in the world outside of Sri Lanka and it happens to be in our town!  CEYIFF is the brainchild of local sisters Aruni Boteju and Ruwani Horanage who wanted to “create a cultural bridge from one paradise in the Pacific Ocean to another paradise in the Indian Ocean”.

The evening began with formal opening ceremonies during which Aruni thanked local leaders for attending and making this truly an exchange between countries:  First District Santa Barbara County Supervisor Das Williams, Mayor Randy Rowse, and Santa Barbara City Councilor Oscar Gutierrez (who is also a member of the CEYIFF jury given his film background).

Sean Pratt, Managing Director of the Santa Barbara International Film Festival (SBIFF), and Ben Goedert, Development Director, also attended the festivities and Aruni noted the prominent and active role that SBIFF has had in supporting local and international cinema within the community and far beyond.

Erica Reyes, District Director with Congressman Salud Carbajal, represented him during the evening’s festivities issuing a Congressional Certificate commemorating CEYIFF’s launch in Santa Barbara and presenting it to Aruni during the opening ceremonies. 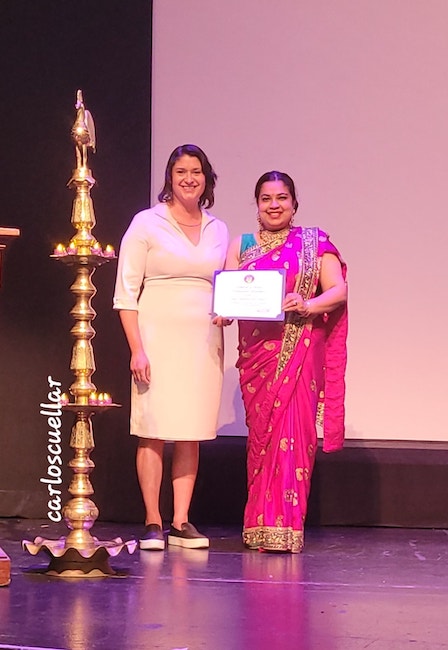 Dr. Lalith Chandradasa, the Sri Lankan Consul General (a representative of Sri Lanka in the United States) addressed the Santa Barbara crowd, thanking them for attending and speaking about the ability of cinema to unite people.

He also mentioned during his remarks that it was perhaps time for a change in the Sri Lankan government.  Sri Lanka has recently suffered from an economic default on its debt arising from long-standing political corruption tied to the ruling family that has dominated the Sri Lankan government for decades.  The remark was notable given that the Consul General’s wife is part of that family (and is likely to be newsworthy in that part of the world).

The film then rolled, “Tsunami”.  Set during the 2004 tsunami that devasted Sri Lanka, Indonesia, and Thailand, it follows the story of a two-and-half-year-old Tamil Sri Lankan girl who is separated from her parents during the wave, found by a Sinhala family and adopted and raised as their own lost girl of the same age.  As background, Tamils and Sinhalese had engaged in a grueling civil war in the country starting in 1983.  Ten years later, after a frantic and unwavering search, the Tamil family finds the girl and a court battle ensues over her custody.  Spoiler alert – there is a happy ending with the families bonding across cultures and essentially raising the girl together.  The film is well made and immerses the viewer in another time and place.

Serendipity is defined as “the occurrence and development of events by chance in a happy or beneficial way”.

The story of my own involvement in CEYIFF goes like this. I was walking out of Marshall’s after buying approximately $25 worth of athleisure wear, saw a poster for CEYIFF in the window, thought “there’s no way that could possibly be happening in Santa Barbara”, and emailed Aruni and Ruwani (who were incredibly welcoming).  I am of Sri Lankan descent although was born in London and grew up in Toronto before moving here.  I love film and the Santa Barbara International Film Festival (SBIFF).

By the way, the word “serendipity” is derived from the name Arabic traders had for Sri Lanka, “Sarandip”.

CEYIFF continues all weekend.  In the spirit of cultural exchange, there are free community screenings in the mornings.  Screenings are at the Lobero, an architectural jewel, and there’s plenty of space to spread out.  Ceylon tea is provided by the Consul General outside of the Lobero free to the public in the evenings.  Tickets for regular screenings are only $12.   The full program guide can be found here along with the ticket link.

You right SACJON. A fire