A standing room only crowd turned out to the December 3, 2019, Goleta City Council Meeting to honor outgoing Community Resource Deputy (CRD) Dave Valadez.  During his six years as the City of Goleta’s CRD, Senior Deputy Valadez had a tremendous impact on the City and made a number of significant contributions.

Mayor Perotte said while he accomplished so much during his time in Goleta, “I especially appreciated how you treated people without homes with dignity and respect.”

City of Goleta Director of Neighborhood Services and Public Safety Vyto Adomaitis said Sr. Deputy Valadez has a lot to be proud of for what he accomplished during his time in Goleta.  He said, “Thank you seems so little to say for all you have done for Goleta but thank you for your service, for your friendship and for your leadership.” 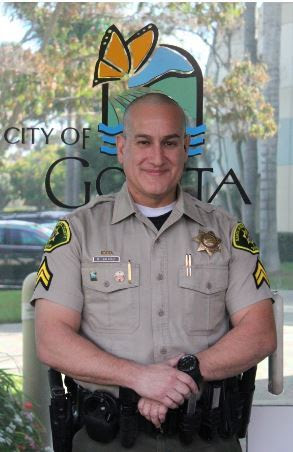 Senior Deputy Valadez said, “I was honored to have this assignment from day one.  I was very proud to be one small part of your team. What I was able to accomplish I could not have done without my family and leadership from my chain of command.  Thanks also to the Volunteers and Sheriff’s Explorers who helped me serve the City.”

During his time with the City, Community Resource Deputy, Dave Valadez was involved in a number of projects and assignments including the following:

Thank you Sr. Deputy Valdez for pouring your heart into your role as the Community Resource Deputy.  You will be missed.  Best of luck in your new assignment with the Santa Barbara County Sheriff’s Office as a Background Investigator.

The Sheriff’s Office is in the process of selecting a new Community Resource Deputy for the City of Goleta.  We look forward to introducing this CRD to the community in the new year.

Sacjon, the governor is also

Check it out. Had to dig a

Hollyweird !! Sue for the

If you are unhappy with the

Why is Rogers still working

Cameron is now deceased and