The first ever Gelato Festival was held in Florence in 2010, and the first ever American stage continued in Santa Barbara on October 20 through October 22. With the support of SIGEP and Carpigiani, the Gelato Festival America welcomed Gelato Artisans from around the world who competed with their special flavors, created for the three-day Festival. These flavors were healthy alternatives compared to other frozen desserts and were made from fine carefully selected ingredients and blended in imaginative and delicious combinations. Purely Sedona provided water and west central food service provided fresh organic fruit and vegetables for use by the 2017 Santa Barbara competition Gelato Chefs. 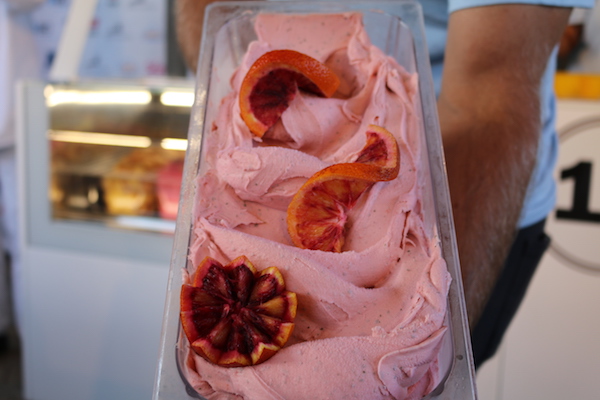 This was such a fun addition to a balmy weekend in Santa Barbara that brought a very European flavor, literally and figuratively, to one of the most popular tourist destinations in California. Despite wind warnings, and it was Chicago style windy out there, these amazing gelato chefs really brought it!

They prepared their product in a tent with clear plastic siding to allow visitors to watch, and then served it from chic gelato booths. Special tastings and classed were held in the stage tent where a bevy of guest gathered to learn, taste and vote on their favorite flavors. 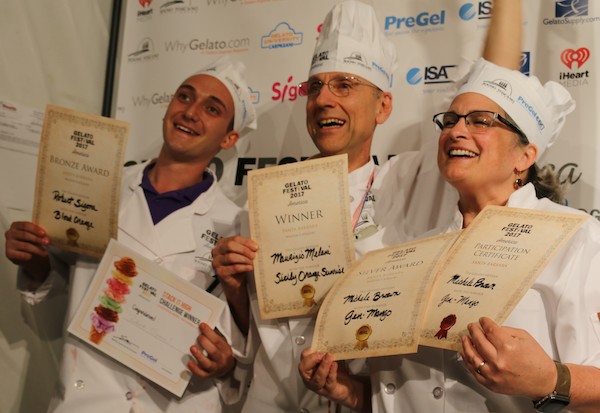 The winner Maurizio Melani was selected by two panels, each of which accounted for 50% of the vote: a panel of technical experts composed of journalists, media members, and sector experts, along with a panel composed of all the members of the general public who took part in the Festival.

I was honored to be a selected member of the juried panel of journalists, and media members to taste and vote on the winning gelato to be awarded this prestigious award. Technical jury standings were determined by points of each judge for gelato presentation, flavour and structure. The judges' votes represented 50% of the score, with the peoples choice votes representing the additional 50%. 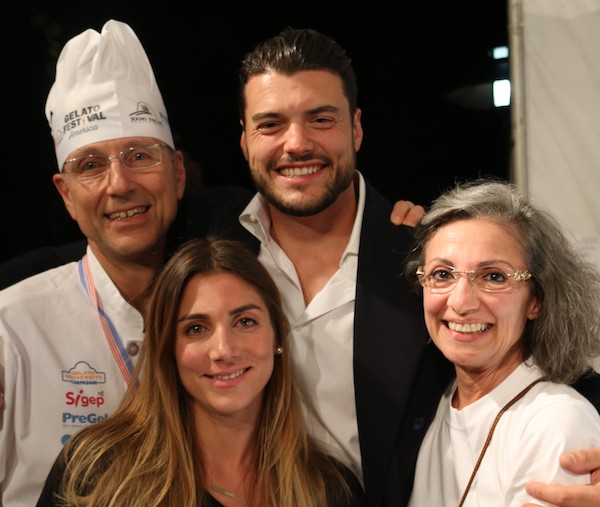 This was a difficult judging due to the number of outstanding gelato chefs participating. They all created recipes of exceptionally healthy and imaginative ingredients presented so artistically. The versatility of each gelato was impressive, and the healthy focus of the recipes which were made with no dairy or fat was totally appreciated by the talented collection of California judges on the panel, including a several from Santa Barbara.

The Best Gelato Festival America 2017 Gold Medal went to Maurizio Melani from Heladeria Veneta in Spain, who spent most of his life in Milan perfecting his skills as a Gelato Master before moving to Spain. His Sicily Orange Sunrise Gelato was fantastic in taste and presentation. The Silver Medal went to Michele Brown from Brook Hollow, Texas. Michele is an executive chef at a country club in Brook Hollow, Texas and her chef son worked with her on their outstanding Roasted Green Tea with Crunchy Mango gelato. The Bronze Medal & “Stack it High” Award went to Robert Sigona for his Blood Orange recipe. My personal favorite was a gelato created by Salvatore Bonomo from Nonna Rose Gelato in Los Angeles, which received a Special Mention. The Shades of Rose recipe made with a blend of roses, water, lemon, and fresh peaches was to me absolutely outstanding; I could eat this one every day.

The 10 competitors for the Gelato Festival in Santa Barbara included:

The Gelato Festival was held at the La Cumbre Plaza Mall in Santa Barbara. Everyone in attendance was able to taste all the gelato and cast their vote for their favorite flavor. There were also some unique flavors by PreGel America and WhyGelato.com, authentic flavors by Carpigiani Gelato University and gastronomic sorbet by Sogno Toscano for everyone to sample. 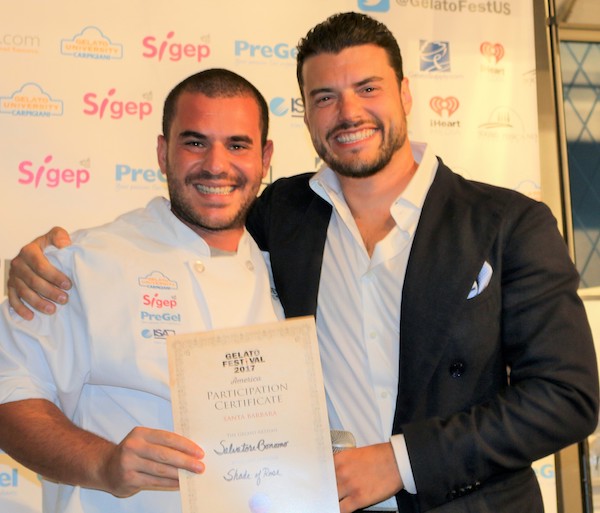 I enjoyed talking with John McCabe, Regional Area Manager of Carpigiani North America, who said, "Artisan gelato, known as fresh food produced daily by skilled gelato chefs, is gaining an international recognition over the last few years as a distinctive element of Made in Italy like pizza, pasta and espresso. The partnership with Gelato Festival and its development in the U.S. as a strategic market strengthens our long-term plans to provide the best support possible to the gelato artisans and their creativity."

Festival activities included fun for all ages including a kids judging, and educational opportunities in the Gelato School where guest learned what it takes to become a Gelato Chef. Sogno Toscano was offering discounted prices on fantastic Italian products that included everything from fine olive oils to a lovely skincare line. Show presenters stated that on Monday morning after the event all leftover food was being donated to the Santa Barbara Food Bank.

Other cities on the tour for 2017 include: Tucson and Scottsdale, AZ. Tickets are available online with discounts up to 10% in advance. For more details and to purchase tickets, visit gelatofestivalamerica.com/ticket. 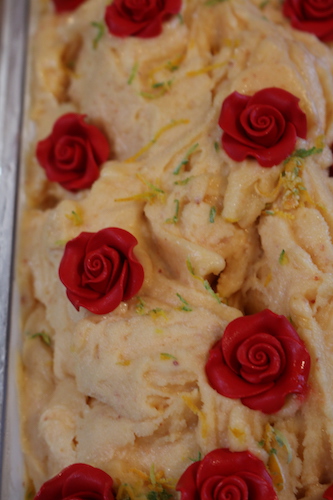 Not even a single Italian gelateria was represented? Not saying that non-Italians can't make good gelato, but that is like having a sushi festival without anyone from Japan. Still wish I would have gone though.

I was initially shocked by the price, but because we went as a family group, it was only $20.00 for adults, and $15.00 for those of us over sixty (and maybe for kids also). For the price, you got 14 tastings which were in small plastic cups or tiny cones. We haven't had anything organized quite like this in Santa Barbara before, so it was confusing at first. Once we figured it out, it was lots of fun. This was about experiencing different and unusual flavor combinations. When I left I felt like I had way too much gelato, but the next day I found myself dreaming about my favorite one, and I went back and bought a pint ( blood orange, strawberry and ginger). I would certainly consider going again.

As we went into Lure for a super-tasty dinner we noticed the festival and decided that would be the perfect dessert. Were we ever wrong! We fell over at the price, especially 20 min. before closing, of $20-$30 for small cup samples. I will venture right now this event will not return in 2018 due to the sheer price let alone the odd location in an already empty shopping mall.

$30 for 10 samples. My friend and I went and we're very disappointed that we could not share or even taste a single gelato. We ended up going to Via Maestro for our gelato. We didn't see very many people there. I wonder how many votes the winner got.

I drove by leaving Vons adjacent to where they blocked off over 30 parking slots and the connecting lane which was empty and no customers at one booth and very few at the others. At $30 a pop, too rich ( pun intended ) for my dollars.

What a terrible time for me to swear off sugar. And: 8449, it was advertised. I know, because I had to talk myself out of going. Congrats to the winners. Terrific photos. Anyone else think that Melani gentleman is a doppelgänger for Grant House?

HOW DID I NOT HEAR ABOUT THIS??

"something that will further

Who would have guessed that

VOICE - if you "personally

LCP - where's the hate? Some