UCSB Arts & Lectures' (A&L) annual free summer cinema takes a trip back to the drive-in (and back in time!) with a series of nostalgic comedy and adventure flicks from the ’80s and ’90s. Usher in those summertime vibes with Be Excellent and Party On! - Movies Under the Stars in Your Cars, a fun mix of films that offers something for everyone. The films are free and will screen on Thursdays at 8:30 p.m. from July 1 through August 12 at the West Wind Drive-in in Santa Barbara. First come, first served; gates open at 7:00 p.m. Arrive early to enjoy food trucks, concessions, entertainment and prize drawings!

“Following the success of last summer’s series at the drive-in,” says Arts & Lectures Miller McCune Executive Director Celesta M. Billeci, “we invite people to come back, reconnect, have fun and indulge in a blast from the past. We’re so very grateful to our friends at Montecito Bank & Trust for their support in making these films free and accessible to the community.”

“Montecito Bank & Trust is ready to once again celebrate the safe gathering of our communities at the drive-in for the UCSB Arts & Lectures Free Summer Film Series,” MB&T's Chairman and CEO Janet Garufis says. “This year's Be Excellent and Party On! inspired films will allow viewers a chance to reconnect with their adventurous side and remember how important it is to incorporate friendship and laughter into our everyday lives!”

Be Excellent & Party On! - Movies Under the Stars in Your Cars is presented by UCSB Arts & Lectures. Premier Sponsor: Montecito Bank & Trust and  KCSB-FM 91.9. Presented in association with the City of Goleta, UCSB Athletics, Carpinteria Movies in the Park, Santa Barbara County Office of Arts & Culture and the UCSB Summer Culture and Community Grant Program. Special thanks to Bicycle Bob's, Santa Barbara Independent, KLITE 101.7 FM, and Voice Magazine. 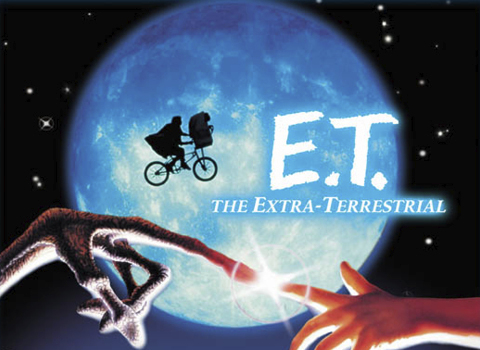 Steven Spielberg's heartwarming masterpiece E.T. The Extra-Terrestrial is the winner of four Academy Awards and one of the brightest stars in motion picture history. Filled with unparalleled magic and imagination, the film portrays the moving story of a lost alien and the 10-year-old boy who befriends him. But with a government task force determined to get its hands on Earth’s first visitor from outer space, Elliott (Henry Thomas), Gertie (Drew Barrymore) and Michael (Robert MacNaughton) team up to help E.T. escape and find his way back home. (Steven Spielberg, 1982, PG, 115 min.)

Come early for a chance to win a youth bicycle courtesy of Bicycle Bob's, among other prizes! 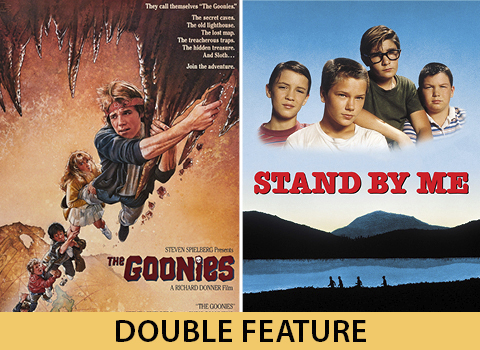 The Goonies / Stand by Me

From start to buccaneering finish, family adventure classic The Goonies plunges a band of small heroes into a swashbuckling, surprise-around-every-corner quest beyond their wildest dreams! Following a mysterious treasure map into a spectacular underground realm of twisting passages, outrageous booby-traps and a long-lost pirate ship full of golden doubloons, the kids race to stay one step ahead of the bad guys. (Richard Donner, 1985, PG, 114 min.)

In a small Oregon town, a group of friends – Gordie (Will Wheaton), Chris (River Phoenix), Teddy (Corey Feldman) and Vern (Jerry O’Connell) – sneak smokes, tell tall tales, cuss ’cause it’s cool and band together when the going gets tough. When a teenager goes missing, their unforgettable two-day trek in search of the body turns into an odyssey of self-discovery. Filled with humor and suspense, this film based on a novella by Stephen King is about friendship and the indelible experience of growing up. (Rob Reiner, 1986, R, 87 min.) 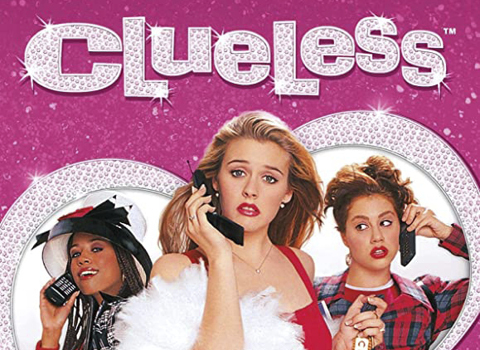 It’s not easy being the most popular and glamorous girl at Beverly Hills High. Yet 15-year-old Cher (Alicia Silverstone) keeps it all together, even finding time for extracurriculars like playing matchmaker and giving a dowdy friend (Brittany Murphy) a fashion makeover. But her tidy world unravels with the appearance of a stylish new classmate (Justin Walker) and a square stepbrother (Paul Rudd), and she soon learns that when it comes to love, she’s clueless. With a supporting cast featuring Stacey Dash, Donald Faison and Jeremy Sisto, this “wickedly funny” (Los Angeles Times) tale based on Jane Austen’s Emma is as smart and charming as ever. (Amy Heckerling, 1995, PG-13, 110 min.) 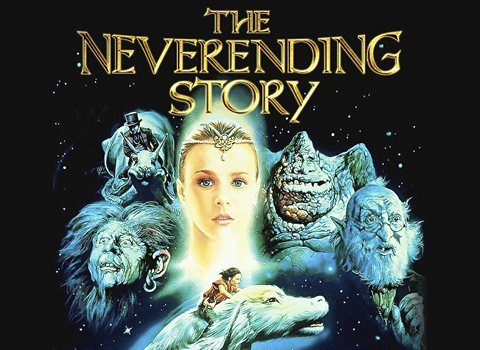 When young Bastian Bux borrows a mysterious, ornately-bound book, he never dreams that turning a page will draw him into Fantasia, a shimmering world of racing snails, hang-glider bats, soaring luckdragons and puckish elves. Menaced by an approaching void known as The Nothing, the creatures of this fantasy world must rely on the bravery of the warrior Atreyu – and on the faith of Bastian, who by reading the tale has lived and journeyed with them all. This thrilling family favorite based on the bestselling work by Michael Ende is an open book to fantastic adventure. (Wolfgang Petersen, 1984, PG, 102 min.) 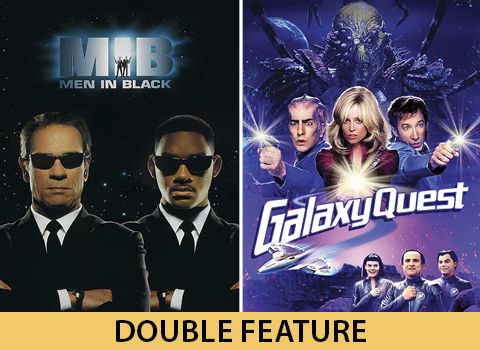 In this sci-fi buddy comedy favorite, Agent K (Tommy Lee Jones) is a member of a top-secret organization that has been tracking and regulating extra-terrestrial activity on Earth for over 40 years. When K finds himself in need of a new partner, brash NYPD detective James Edwards (Will Smith) joins the Men in Black as Agent J. Armed with space-age technology and razor-sharp wits, K and J investigate a series of close encounters and uncover the deadly plot of one particularly nasty visitor (Vincent D’Onofrio) who threatens to destroy the planet. (Barry Sonnenfeld, 1997, PG-13, 98 min.)

Twenty years after the cancellation of their show, the stars of the Galaxy Quest television series still cling to their roles as the courageous crew of the NSEA Protector, scraping a living through sci-fi conventions and ribbon-cutting ceremonies. When a distressed interstellar race under attack from a reptilian warlord mistakes the show’s transmissions for reality, the crew of has-beens is unwittingly recruited to save the day. With no script, no director and no clue, the actors must give the performances of their lives in this rollicking adventure spoof starringTim Allen, Sigourney Weaver, Alan Rickman, Tony Shalhoub, Daryl Mitchell and Sam Rockwell. (Dean Parisot, 1999, PG, 103 min.) 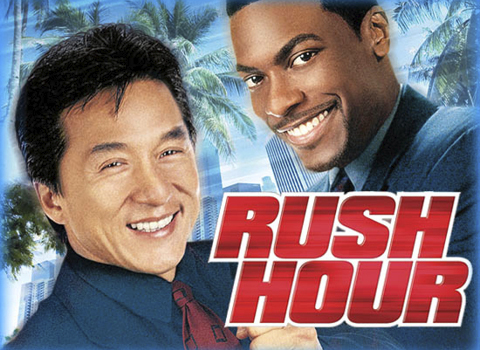 Detective Inspector Lee (Jackie Chan) is the pride of the Royal Hong Kong Police, while Detective James Carter (Chris Tucker) is the LAPD’s worst nightmare: a cocky, loud-mouthed officer who prefers to work alone. Following the kidnapping of the Chinese consul’s daughter, cultures clash and tempers flare as the two cops from different worlds quickly discover one thing in common: they can’t stand each other. But with time running out, they must join forces to catch the criminals, mixing punches with punchlines in this hilarious action-comedy. (Brett Ratner, 1998, PG-13, 97 min.) 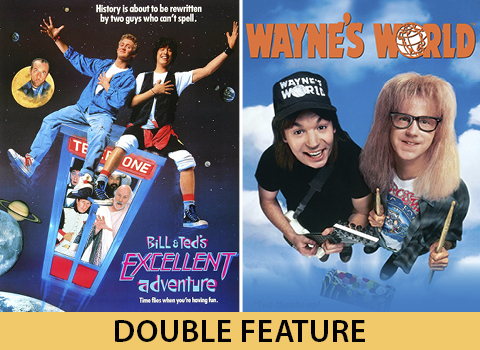 In this righteous comedy, underachievers Bill (Alex Winter) and Ted (Keanu Reeves) have spent so much time on their rock band, Wyld Stallyns, that they’re flunking high school history. When Ted’s dad threatens to send him away to military school, Bill and Ted realize it could mean the most heinous end of the Stallyns! Luckily, a guardian angel from the future (George Carlin) arrives with a bodacious solution: a time-traversing phone booth they can use to hear directly from history’s most influential personalities. Their journey may be a blast... but will they learn enough to pass their class? (Stephen Herek, 1989, PG, 90 min.)

In the tradition of The Ten Commandments, Lawrence of Arabia and Gandhi comes a sweeping screen epic bursting with spectacle and drama... NOT! It’s Wayne’s World, the hilarious, party-down movie featuring rockin’ tunes, radical women and your most excellent hosts, Wayne Campbell (Mike Myers) and Garth Algar (Dana Carvey). When a sleazy television executive (Rob Lowe) offers the duo a big contract to tape their public-access show at his network, Wayne and Garth can’t believe their good fortune. But they soon discover the road from basement to big time is a gnarly one, fraught with danger, temptation and ragin’ party opportunities. (Penelope Spheeris, 1992, PG-13, 95 min.)

Ah, so quick to judge. Let

"Create your own sidewalk

Knowing she had deep mental

All parties here are at fault

Mas Gaviota, weird how you

VOR: When Rogan said "My

VOICE - I never said they

They never said what you