The Forest Service has extended the deadline, from June 30 to August 14, for the public to comment on its proposal to cut down old-growth trees and chaparral across 755 acres deep in the Ventura County backcountry. The move follows a letter sent to Los Padres National Forest Supervisor Kevin Elliott by Congressman Salud Carbajal, who introduced legislation earlier this year that would protect portions of the project area under the Wilderness Act.

The Central Coast Heritage Protection Act (H.R. 2199), which was approved in a bipartisan vote by the House of Representatives on February 12, 2020, would expand several existing wilderness areas in the Los Padres National Forest. The bill includes two additions to the Sespe Wilderness that extend into the proposed logging and chaparral removal area. The bill enjoys widespread bipartisan community support and is currently awaiting approval in the U.S. Senate through companion legislation introduced by Senator Kamala Harris.

The letter from Congressman Carbajal requested the comment period extension and asked that the agency consider conducting an environmental assessment, something officials have indicated that they will use loopholes to avoid. 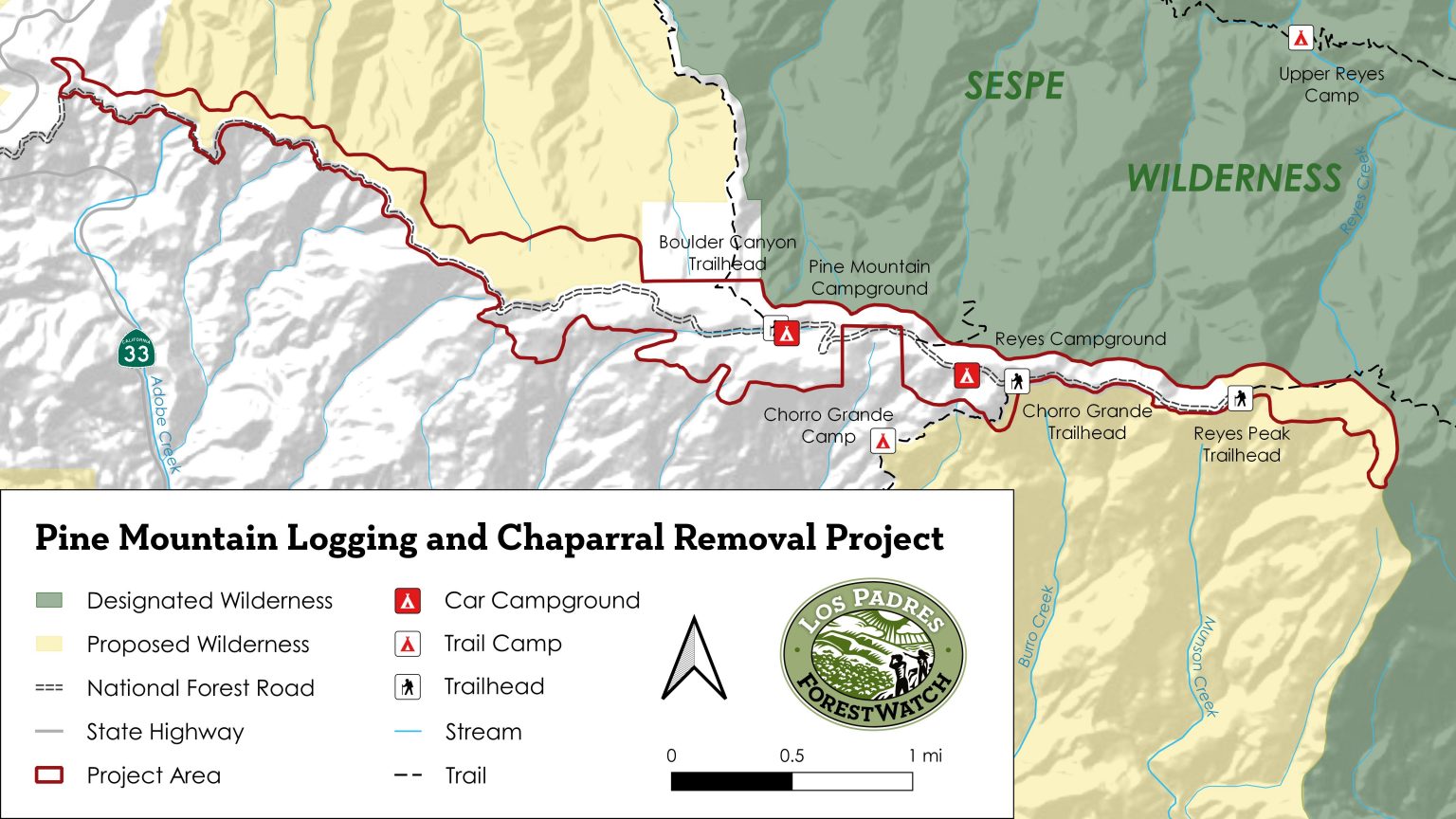 It comes on the heels of letters from more than 8,500 residents of Ventura County and beyond who have submitted comments in opposition to the project. Concerns include damage caused to a much-loved recreation area, disturbance of cultural sites, impacts to sensitive and rare wildlife, increased wildfire danger, and weakening the forests ability to adapt to climate change. The loophole would also lift the requirement for the Forest Service to address issues raised by the public while also eliminating the official objection process which helps reduce the potential for litigation.

Despite its massive scale, the Forest Service intends to fast-track the project by categorizing it as “forest health and fuels reduction” to bypass requirements under the National Environmental Policy Act to conduct a detailed study of potential impacts to the area’s unique ecosystems, as well as to consider alternatives that may be more effective and less harmful. The agency has admitted that the project will do little to aid in fighting the type of fires that cause the vast majority of damage to communities each year. Further, vegetation removal projects can increase wildfire risk by removing fire-resistant trees, increasing heating and drying of the forest floor, and spreading non-native invasive grasses and weeds that ignite more easily and spread wildfire more quickly.

The project, which agency officials have said could be completed by a commercial logging company, would allow the cutting of centuries-old trees, up to five feet in diameter, and the clearance of rare old-growth chaparral along six miles of the prominent ridge known as Pine Mountain, stretching from Highway 33 to Reyes Peak. The area is historically and culturally important to local Chumash groups and wildly popular as a recreation area. It is some of the most accessible backcountry on the Central Coast for urban areas around the region.

The Forest Service released the project in late May, even though the agency considers it a very low priority. It is ranked as number 118 out of 163 in order of importance of existing and potential vegetation removal projects in the Los Padres National Forest, according to a 2016 study by the U.S. Forest Service.

The logging project appears to follow a May 2018 memo issued by the Trump administration that encouraged the Forest Service’s reliance on loopholes, called categorical exclusions, as a “first choice” whenever possible, urging forest officials to “explore creative methods” to complete projects without standard environmental studies. Further, the agency has ignored requests from local groups to provide scientific and other project data to support their justification for the project.

“It’s troubling to see the agency fast-track such a low priority project in a backcountry location during such a chaotic time,” said ForestWatch conservation director Bryant Baker. “Extending the comment period is a nice gesture, but the Forest Service needs to seriously rethink whether this project is necessary and conduct an environmental assessment at minimum before moving forward.”

“The Forest Service is using forest health and the threat of wildfire to mask logging and potential biofuels harvest in an area that is important to the Chumash, and, as one of the few stands of old-growth trees and chaparral in the region, is cherished by so many for so many reasons, from its unique birding opportunities, to world-class bouldering,” said ForestWatch advocacy director Rebecca August. “People across the region are outraged.”

The ridge is home to some of the most diverse and unique habitats in the Los Padres National Forest. Pine Mountain hosts the greatest diversity of coniferous tree species in Ventura County, which occur next to large expanses of rare old-growth chaparral. Altogether, the ridge is home to over 400 species of native plants, including dozens that are rare or sensitive. As a biodiversity hotspot, the area is also home to several species of wildlife that depend on the mountain’s unique ecosystems. Mountain lions, black bears, bobcats, and numerous species of birds and small mammals can be found in and around the project area.

“The Forest Service should be spending its limited time and resources on projects adjacent to communities where science has shown them to be the most effective,” said Baker. “By spreading highly flammable invasive grasses and removing larger fire-resistant trees in some cases, this proposal could actually increase fire risks rather than mitigate them.”

The Forest Service will accept comments on the project until August 14. This may be the only opportunity the public will have to weigh in with concerns. To submit a comment online or learn more about the project, visit LPFW.org/pine.

Typical knee jerk reaction to anything re land management. All you negative commenters would rather see the area burn to a crisp rather than thin out the dead trees and undergrowth. Someone mentioned that the logs/ brush will be removed by help, so no gouging the land SB Jeweler. BTW I be if you went back to where to worked your summer job you probably could not identify it.

SALSA GUY please take a moment to inform yourself of the implications of this decision. It has nothing to do with fuel reduction as fire prevention.

They're *not* talking about clearing out dead trees and undergrowth. The Forest Service - charged with protecting our wild lands - is proposing to cut down healthy old-growth live trees and mature chaparral . The argument that it's for fire protection is bogus. After this unique ecosystem is destroyed, the opened-up area will be colonized by weedy grasses and other flashy fuels that are a far greater fire hazard.

Heinous greed and bribery that goes on with big corporations like Nestle and the Forest Service!!! I will be making a comment, but even the thousands of us who care about the trees and the land will not be enough to stop the greed of those that can be bought. Let's STOP THIS!

If nothing else, Heli-Log it to prevent destruction of habitat, conserve the fragile ecosystems.

If you're like me, and wanted to learn more about the project and comment without going through Los Padres Forest Watch, here is the USFS description the project https://www.fs.usda.gov/project/?project=58012 You can add your comments via the link on the right side of the web page.
https://cara.ecosystem-management.org/Public//CommentInput?Project=58012

I worked for the summer after High School in the Sierras in the Minarets Wilderness. Logging was allowed. I saw the devastation first hand that just the logging roads alone created in the forest. The loggers of course thought they were thinning the herd. Their careless use of heavy equipment gauging the earth and creating horrible erosion which negatively affected the watershed. There was a pretty part of our wilderness for families and backpackers, and there was the sad destruction by loggers that would take decades to recover. What they did to the soil was worse than a forest fire.
I wrote to the suggested email in the article. I hope you'll add your voice to stop the rape of the wilderness.

Mismanagement. The forest service needs to protect the forest, not destroy it.

I think this article is misleading. Reading the FS plan, no logging companies are involved in theis (in fact the usable wood is to be given away as firewood). The ostensible purpose is to prevent fire and protect the oldest pines and the campground. I'm not sure this is needed though and do agree that the heavy equipment will cause erosion and habitat destruction. Also the no environmental review condition is always allowed for activities to prevent fire I think, so it's not tied to the Trump administration covid relaxation of requirements.

Got to get this project through before the election in November hopefully stops these releases of swamp gas from Trump's Washington. If not we are all in big trouble.

These bastards. It's all about greed. Ruining complete ecosystems and destroying habitat for a great many creatures, this is absolutely shameful. There's not even the excuse that the clear-cutting will help in wildfire prevention. I hope this destruction of old growth trees is banned completely.

Ridiculous pandering of the Forest Service to commercial logging interests, as usual. Good for Congressman Carbajal and Ventura residents fighting this. T