The cause of death has not been disclosed.

Cunningham and his four brothers (Anthony, Bruce, and Randall) all played football and other sports at Santa Barbara High School in the late 60s and early 70s. The newly installed track at Peabody Stadium was recently named in their honor. 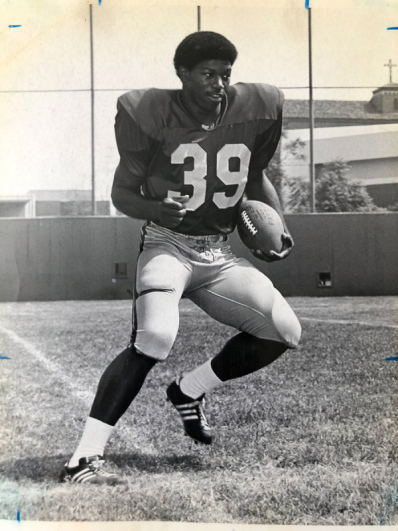 Cunningham went to the University of Southern California (USC) after graduating and became a standout fullback where he was part of the 1972 team that produced a perfect 12-0 season. They went on to beat Ohio State in the 1973 Rose Bowl where Cunningham was named the MVP of that game. His collegiate performance earned him an induction into the College Football Hall of Fame.

He was then drafted into the National Football League (NFL) and helped the New England Patriots make the playoffs and eventually earned a spot at the Pro Bowl. He produced a 1,000-yard rushing season in the NFL, accounted for over 7,300 yards as a runner and receiver, and scored 49 touchdowns in his pro football career.

"Sam 'Bam' Cunningham was one of my favorite players throughout the '70s and my sons all loved him. After I bought the team in 1994, it was my honor to welcome him back to the team on multiple occasions, recognizing him as a 50th anniversary team member and again for his induction into the Patriots Hall of Fame. As much as I admired him as a player, my affection for him only grew after spending time with him and learning more about him as a person. He made a tremendous impact, both on and off the field, and was beloved by his teammates. As a Patriots Hall of Famer, Sam's legacy and contributions will be preserved and celebrated forever, but today his loss is felt with heavy hearts," said Patriots Chairman and CEO Robert Kraft in a statement.

Cunningham has been described as the Patriot's "all-time leading rusher."

Sam was truly a gentle giant, a quiet, friendly boy who grew into an exceptional, gracious man. He lived a good life and I will truly miss him.

By coincidence or fate I was drawn to an autographed photo Sam gave to my daughter years ago yesterday. This photo has been sort of lost in plain sight for years. I dwelt on the picture and remembered my daughter's pleasure in giving it to me (a USC grad) years ago. Next thing I hear is that Cunningham is dead. I had a chill. He died too young for sure.

The stories about him include when the integrated USC team beat Alabama's all-white team in 1970, which may have encourage southern teams to also integrate. My condolences to his family on this loss.

This really is sad, sad news. Such a shock. Sam was a wonderful human being. Our hearts go out to his family, friends and to all who knew and loved this splendidly talented and amazing man.

voting James is exactly that,

It's hilarious and pathetic

My household is voting for

Byz is on the wrong side of

Another Big Party at Bellosguardo