(SANTA BARBARA, CA) Saturday afternoon at approximately 12:41 the Santa Barbara City combined communication center was notified of an injury vehicle accident in the 1300 block of State Street. The reporting party said a vehicle had collided with the patio at Carlitos restaurant located at 1324 State Street. Santa Barbara City Fire Department initially responded one fire engine and one fire truck. Due to the nature of the call an additional engine and Battalion Chief were added to the incident. First on scene Firefighters determined there was no structural compromise to the building wall, and no one was trapped by the vehicle as initially reported. 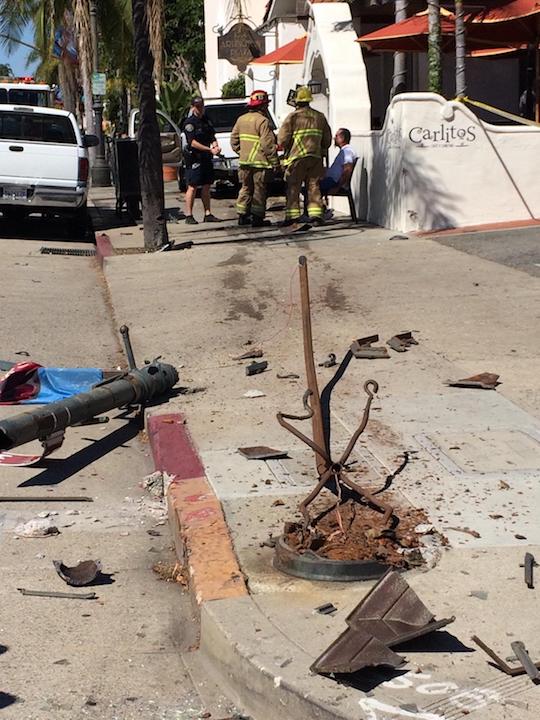 A Toyota truck driven by a male occupant left the roadway traveling Northbound on State Street. The vehicle knocked over a street sign, drove on the sidewalk and collided with the patio wall at the restaurant. Initial reports indicated a possibility of 2 pedestrians injured. That number increased to a total of 5 patients after firefighters located additional pedestrians that were hit by the vehicle. No one on the patio was hurt. The incident evolved into an MCI; multi casualty incident.

A request was made for an AMR supervisor and an additional ambulance to respond to the scene. 5 total victims were transported to Santa Barbara Cottage Hospital for treatment. City public works responded to repair the street sign and Santa Barbara City Police assisted with traffic control and are investigating the accident.

MCI LEVEL 1 5-14 patients (approximately) a suddenly occurring event that overwhelms the routine first response assignment. The number of patients is greater than can be handled by the usual initial response. Depending on the severity of the injuries the system may have adequate resources to respond and transport the patients. Duration of the incident is expected to be less than 1 hour. Examples: Motor vehicle accident, active shooter.