The first arriving engine company observed visible flames showing and reported a “working fire.” Additional firefighters were called to the scene based on the volume of fire.  Firefighters made an aggressive interior attack and searched the residence for any possible victims.

An SBFD ladder truck crew cut a hole in the roof to allow smoke to be removed from the structure. This common tactic allowed firefighters to bring the fire quickly under control.

Live power lines supplying the residence fell during the incident and temporarily limited access to the structure, until the hazard could be secured.

The residence next door to the involved structure also sustained fire damage due to the close proximity of the main fire.

No injuries were reported. The cause of the fire is under investigation by the Fire Prevention Bureau, and damages were estimated at approximately $250,000 dollars.

The Santa Barbara City Fire Department would like to remind everyone to have a working smoke detector in every room and hallway in your residence. Daylight savings is a great time to check your batteries and test your smoke alarm. 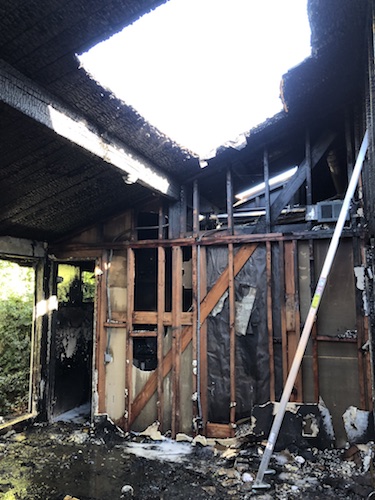 Structure fire response to an electrical fire inside 300 block of Peach Grove Lane.

Sounds like some sort of tower fell??? Heard that wires in the back yard, wires arcing..

Tower in the back yard..

I am not hearing all of the info but two more engines are responding code 3 to this incident...Anyone else got their EARS on feel free to report..

Fire is under control...

A near by residence was evacuated in the 3700 Block of Cordero Drive..

Hi Roger, there was tall radio tower on top of the garage which was next to the power line. Evidently that fell onto the wires.

I have always thought that

HENRY - does this mean maybe

They are free to educate

SBO, who exactly wrote the