The Cal Fire engineer from San Diego who died while working on the eastern flank of the Thomas Fire in Ventura County on Thursday morning has been identified as 32-year-old Cory Iverson.

Iverson, who drove a fire engine, was pronounced dead at the scene, said Cal Fire spokeswoman Lynne Tolmachoff in an interview with CNN. There were no other injuries in the incident. 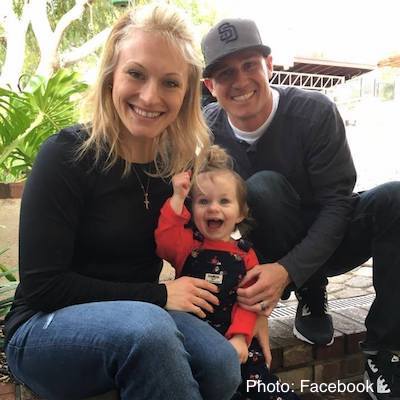 A procession was accompanying his body as it was removed from the scene near Fillmore. Firefighters gathered in the 1700 block of Grand Ave near citrus groves as the remains were placed in a waiting hearse around 3:30 p.m., shown by aerial video from KTLA5.

"I know I speak for us all in saying our hearts go out to our Cal Fire colleagues during this difficult time.This is a tragic reminder of the dangerous work that our firefighters do every day. The Thomas Fire has many unprecedented conditions and complexities that challenge the already demanding job of fire suppression," said Los Padres Forest Supervisor Teresa Benson.

During a press conference on Thursday afternoon, a Cal Fire spokesman stated they have initiated a serious accident review team to investigate exactly what happened, but they can't say more until the investigation is complete.

A moment of silence was taken at the beginning of the Thomas Fire community meeting in Santa Barbara on Thursday afternoon.

Iverson leaves behind a 2-year-old daughter Evie and his wife Ashley who's pregnant with their second child due this spring. His employment with Cal Fire San Diego began in 2009.

Procession has begun for #CalFire firefighter who passed in #ThomasFire in Fillmore today. pic.twitter.com/KN5csZb9Lo

I am very saddened to report that a firefighter fatality has occurred on the Thomas Incident. The incident is still unfolding, but in this world of fast moving information, it is important to me that only factual information be shared. To that end, I can confirm a fatality of a CAL FIRE Engineer from the San Diego Unit has occurred. IMT 4, CAL FIRE Local 2881 and Southern Region leadership are working to support the Unit and his family, who have been notified.

More details will be made available as they are confirmed. In the meantime, please join me in keeping our fallen firefighter and his loved ones in your prayers all the responders on the front lines in your thoughts as they continue to work under extremely challenging conditions.

A firefighter was reportedly injured while working the Thomas Fire in Ventura County on Thursday morning.

Unconfirmed reports from a HAM radio operator on Twitter state a firefighter made a "MAYDAY" call and was down in a burn area in the 1700 block of Grand Avenue near Fillmore.

The Ventura County Fire Department confirmed the report but did not have an update on the event, information on the firefighter’s condition, or what happened, but did confirm that a helicopter was dispatched to assist, reports the Daily News.

Further reports state the area where the firefighter called for help was overrun by fire.

On Thursday morning the Ventura County Sheriff's Department sent out an alert notifying residents of increased activity in the Fillmore area. Residents in the unincorporated areas around Fillmore of the mandatory evacuation zone within the following boundaries: Hall Road to the west, Sespe Creek to the east, the Los Padres National Forest boundary to the north, and the Fillmore City limits to the south should remain vigilant.

This is the second report of an injury to a firefighter while working on the Thomas Fire. A firefighter from Redding suffered a fracture to his lower leg on Sunday, December 10, and was treated at Santa Barbara Cottage Hospital before returning home.

The Thomas Fire is at 242,500 acres and 30 percent contained as of Calfire's Thursday morning update.

Below are the full Twitter reports of the incident:

#ThomasFire #Fillmore Telling all units to go into DEFENSIVE mode if not actively in suppression for mayday zone, go back to stations

#ThomasFire #Fillmore One squad with air rescue capability ordered into air, to be staged above 1721 Grand Avenue, firefighter down.

#ThomasFire #Fillmore Air Squad 8 now on scene of firefighter emergency (overrun by fire), also Air observer. They are still working on accountability of all resources on the line, in defensive position. NO status from the line since the call. They may now be on phone w/command. pic.twitter.com/eX5Pu3f7z7

This is very sad news. Our condolences go out to the firefighter's family and his/her teammates.

So very very sad. He lost his life helping save all our lives and homes.
Firefighters are Angel's, once u forget, they always remind us how hard they really fight for us!
Hope a GoFundMe acct is open so we can show his family how much we all are thankful to this brave man.

I'm very sad about this God Bless the Firefighters...

Very sad. So sorry for his wife and children (born and waiting to be born).