Fifty Years After Dedication: The Pearl Chase Garden at UCSB

Education was everything to Pearl Chase, who graduated from the University of California, Berkeley, in 1909, Santa Barbara Normal School in 1912, taught at Santa Barbara High School, and received an honorary doctorate from Mills College in 1940.

Chase, along with publisher Thomas Storke and other community leaders, was instrumental in the evolution of the educational institution from Santa Barbara State College to the establishment of the university in 1944. She remained a faithful supporter throughout her life.

In 1972, Chase was honored for her years of community leadership, vision, and service by the University of California with the dedication of a garden named the “Pearl Chase Garden.” 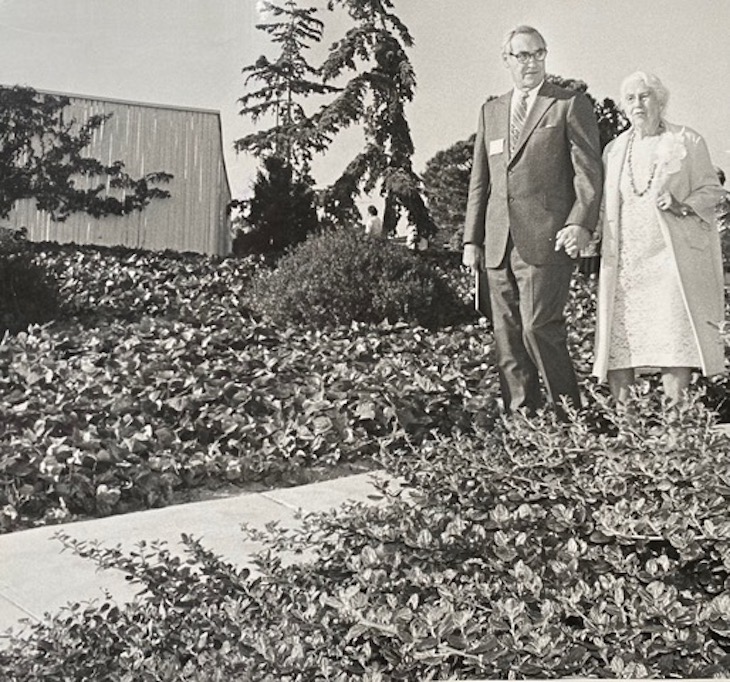 1972: Chancellor Vernon Cheadle escorting Pearl Chase on the day of the dedication of the Pearl Chase Garden. (CREDIT: Courtesy of the Santa Barbara Trust for Historic Preservation)

Then-chancellor Vernon Cheadle was joined by officials including Mayor Gerald Firestone and the director of the California State Parks department, William Penn Mott, Jr., and some 200 guests at a Sunday afternoon reception. A bronze plaque was revealed, reading, “Dedicated to Santa Barbara’s distinguished citizen who has devoted her life to the cause of conservation, our historical heritage and beauty of our city.”

Cheadle commended her for her interests in “historic preservation, civic protection, conservation education, and ecological planning.” And he thanked her for designating the university as the repository for her voluminous collection of conservation and community development. He noted her donation, for years to come would allow “students and other scholars in our area will study this vast collection of manuscripts to gain an understanding of the educational work, the tireless effort, the cooperation of countless public-minded citizens required to achieve Pearl’s ideals.”

[NOTE: Although it’s often referred to as the “Pearl Chase Collection,” she refused to have the treasure trove of historical information named for her. Instead, it’s called the Community Development and Conservation collection, housed in the UCSB library’s Special Research Collections.] 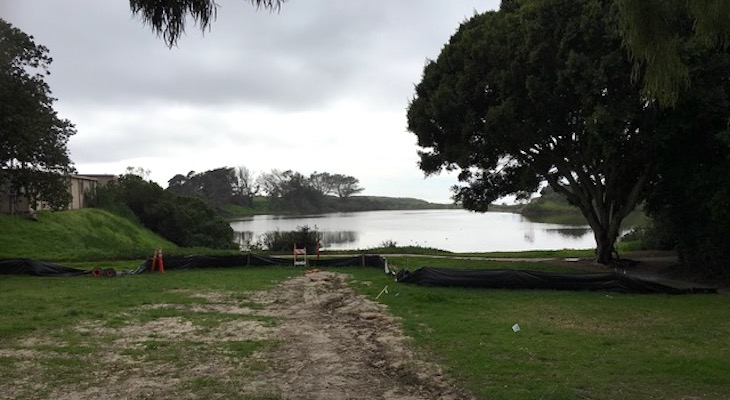 Following a lengthy standing ovation, Chase took to the podium began her comments by thanking the university “for keeping an open space such as this with its lawn and trees. And to plan on keeping it so is something for which we should be very grateful to the university.”

Characteristically she shared credit with the audience. “Every one of you has contributed specifically in one or several of the lines of effort in which we have been interested together over the years.” She continued, “The credit of initiating some of the things mentioned certainly is not mine. Perhaps the carrying on of assistance in following lines of leadership and thoughtful planning has been a privilege which I have been fortunate to indulge.”

A recent visit to the Pearl Chase Garden reveals the extensive project installing new storm drains and seawater pipelines is nearly completed, and the garden remains intact. The open space bounded by several trees, is located at the edge of the lagoon. Walking paths offer a lovely stroll and two nicely placed garden benches make this a lovely spot to relax, contemplate and reflect.

NOTE: This article appears in the January 2022 issue of The Capital,  the monthly newsletter of the Pearl Chase Society. By special arrangement with the Society, we will continue to feature a monthly article from the publication to help keep our readers informed on issues of historic protection and preservation. Contact the Pearl Chase Society at www.pearlchasesociety.org