The Coroner's Bureau is releasing the name of the decedent from the fatal traffic crash on 10/5/22 on State Route 246 west of Skytt Mesa Drive.

The California Highway Patrol (CHP) is now reporting the driver of the Honda CRV, a 73-year-old woman from San Juan Bautista, has passed away.

The passenger, a 73-year-old woman from Duarte, was transported to Santa Barbara Cottage Hospital with moderate injuries.

Stephen Waldman, 71 of Buellton, allegedly made an unsafe U-turn in his Honda Accord. The CRV was following behind Waldman and after the U-turn the left front of the Accord struck the right rear of the CRV causing it to crash into an oak tree.

The below story includes the original report from the Santa Barbara County Fire Department.

At 1:04 p.m., Santa Barbara County Firefighters responded to the area about a half mile west of Solvang. They discovered two vehicles involved in a collision, a Honda CRV and a sedan.

The Honda had collided with a tree and injured two occupants. When crews arrived, a bystander was perfoming CPR on the the driver of the Honda, an elderly female, who was transported to Marian Regional Medical Center by ground ambulance. The passenger, also an elderly female, sustained moderate injuries and was transported by the second ambulance, according to Captain Scott Safechuck

In the sedan, an elderly female driver sustained minor injuries. 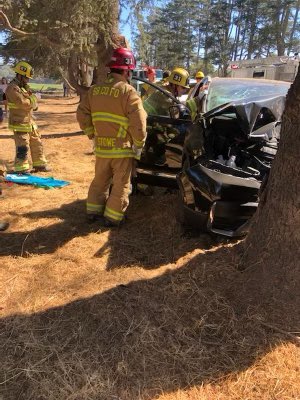 Unfortunately this is not the correct story.. it should be updated if possible. I’m very sorry to say this but it happened in my town and it was a fatal accident. I don’t like to refer to other news articles, but I will just for clarification, it can be found on Noozhawk. I send my deepest condolences and prayers for the family and those involved.

That was the original statement from the Fire Department on Twitter, looks like it's been updated now.

It would have been a much better, more coherent and accurate story if it had just given the names, ages (if necessary) without any adjective. Adjectives give spice to op-eds, but news stories should be just the facts.

True, it's a fact that the federal government defines certain ages as "elderly" for certain purposes, but it is not ipso facto an indication of lesser (or perhaps more, in some circumstances) competence.

A poorly-written story: both vehicles were Hondas all the vehicles were Hondas, all 3 of the injured were in their early 70’s and why call them “elderly” — if they had been 30-65, eg, would they have been described as “middle/aged” or 16-30, eg, as “youthful”? Such descriptions, if not pejorative - age does not necessarily have anything to do with this accident and adds nothing helpful to the facts of the unfortunate (and sad for the families involved) fatal accident.

The fire department does wonderful work but public information is an important part of that work and needs to be improved.

This write-up is credited to/has the Edhat Staff byline, not the fire dept. PIO.

The usage of "elderly" was quite jarring to me too.

I agree, shame on the Edhat staff for using that word repeatedly. Added nothing to the story. I am sorry to hear she passed away.

The Fire Department used the term elderly!! You old timers need to relax. I know you hate to be called elderly but by medical standards, you are.

@630 - the story was updated. They only reported what the Fire Dept released which was all the info at the time. It was then updated with CHP info, read above.

The Federal Government defines 'elderly' as anyone over age 65,

But for driving and Social Security benefits, it is probably closer to age 62?

And it the age when eye sight begins to go south. Cataracts, ets.

Seems the ladies were following too close? Or too old to react to a driver doing
a U-Turn on a highway incorrectly - or illegally. ie too dangerous for conditions.

Or should have pulled to shoulder and waited for traffic to pass, and signalled.

But nobody thinks an age group of 30 - 65 is 'middle age. More likely it is age
40-60? or most systems use ranges of 9 years? ie pre senile is 80?. or are based
on biological norms. ie average in Santa Barbara is 85. and most not able to drive
a car safely.. Just slowly. haha

And one can look online to find the names of ranges. Some are even legal ones.

At least most of the people in this accident survived it, so can provide statements
of facts?

100% his fault, unsafe U-turn and he struck the rear of the other car. Nothing to do with the ladies age. "Stephen Waldman, 71 of Buellton, allegedly made an unsafe U-turn in his Honda Accord. The CRV was following behind Waldman and after the U-turn the left front of the Accord struck the right rear of the CRV causing it to crash into an oak tree."