Thursday afternoon at approximately 4:20 pm, Santa Barbara City Fire Department responded to report of a power pole fire at the intersection of Laguna and Gutierrez Streets. The on scene fire captain confirmed there was active fire involving high voltage power lines at the top of a power pole. Southern California Edison and Santa Barbara Police were requested to the scene to assist with the emergency. There was a potential for the high voltage power lines to fall as a result of the fire. Santa Barbara Police closed off streets and prevented the public from entering the area. There was a widespread power outage as a result of this incident.

Southern California Edison was able to extinguish the fire and initiate repairs to the pole and high voltage power lines.  If you ever witness a power pole fire, call 911 immediately and stay away from the pole. Electrical fires are extremely dangerous. 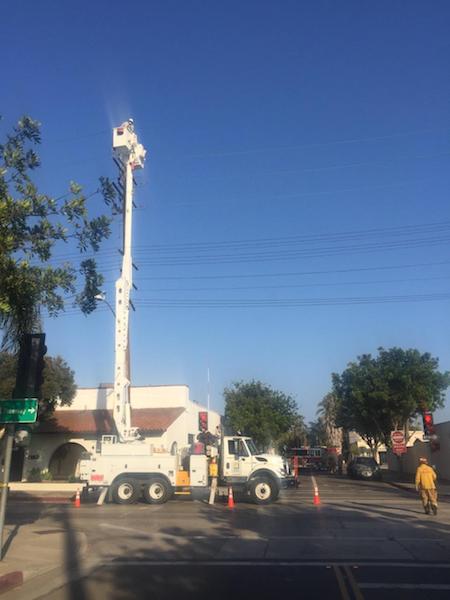 There are electrical problems around town. Earlier the power was out on lower Milpas, there was a smoke investigation inside Montecito Bank and Trust on Coast Village Road. Now there is a burning odor in a residence on Bath Street. Earlier I heard engine one on the scene of power line problems they were waiting for So Cal Edison.

Hopefully they will get that fixed soon..

Power is out from at least Valerio to micheltorena just above the freeway.

I saw on Twitter that there was a transformer blown on Guitterez and Laguna.

the trucks ( cast metal) have

Yes… but the government is

Pretty much everything is a