In front of a throng of family, friends, and colleagues, Mr. Bolton became a Commander of the Royal Order, one of Spain’s highest civilian honors. Ambassador Javier Vallaure, Spain’s Consul General in Los Angeles, presided over the ceremony and presented Mr. Bolton with both the official Decoration signed by his majesty, King Felipe VI, as well as the Medal and ribbon of the Royal Order. 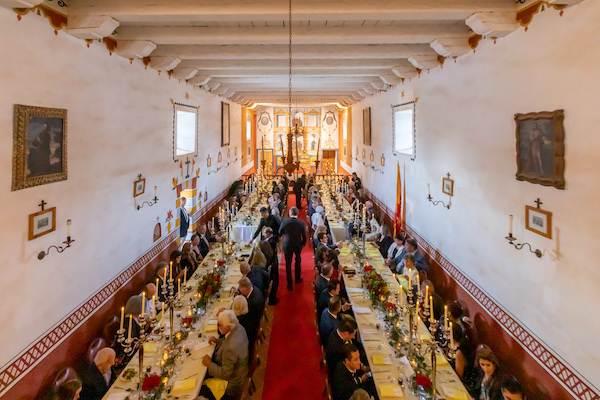 “This is a truly great honor, and I share it with everyone that continues the effort to recognition Spain’s legacy in the Americas and to also help preserve the buildings, culture and traditions the Spanish people and their descendants have left on this side of the Atlantic,” said Mr. Bolton, who also serves as a board member for the Washington DC-based US-Spain Council and Santa Barbara’s Old Spanish Days Fiesta.

Following the decoration ceremony in front of the El Presidio Chapel, guests were invited inside for a candlelight gala dinner. The event coincides with Santa Barbara’s Founding Week activities that mark the anniversary of the establishment of the Santa Barbara Presidio and town in 1782.

The Order of Isabella the Catholic (Spanish: Orden de Isabel la Católica ) is a Spanish civil order granted in recognition of services that benefit the country. The Order is not exclusive to Spaniards, and it has been awarded to many foreigners. The Order was created on 14 March 1815 by King Ferdinand VII of Spain in honor of Queen Isabella I of Castile with the name of "Royal and American Order of Isabella the Catholic" with the intent of "rewarding the firm allegiance to Spain and the merits of Spanish citizens and foreigners in good standing with the Nation and especially in those exceptional services provided in pursuit of territories in America and overseas." The Order was reorganized by royal decree on 26 July 1847, as the modern "Royal Order of Isabella the Catholic" with a broader focus than the Americas.

The King of Spain (currently Felipe VI) is Grand Master of the Order. The Chancellor of the Order is the Minister of Foreign Affairs. All deeds granting decorations of the Order must bear the signatures of both. Members of the order at the knight and above enjoy personal nobility and have the privilege of adding a golden heraldic mantle to their coat of arms. Knights at the rank of commander and commander by number receive the style of "His or Her Most Illustrious Lord".

Congratulations are in order for His Most Illustrious Lord David Bolton.

OMG, Another proof of the irrelevance of the ruling class to the people of the world. And another reminder as to why rebuilding this facility that protected the autocrats of Spain in their claim over the local population for a couple of decades was a bad use of citizen tax money. How can we, a republic, continue to glorify the idea of dictatorships?

RHS: 15 years ago I would have had the same outrage. Back in 2004 one of my family members passed away and left me a fortune, or at least a fortune to me. On a whim, I used part of that money to buy 2500 shares of Netflix stock. For basically doing nothing, I am now financially independent. I still change the oil on my cars, so the $$$ did not change me that much, but has changed my perspective of "hating" people cuz they have dough or come from wealthy families. In all honesty, it was plain jealousy. Think about it.

Only 17% of US wealth is inherited wealth, the other 83% is earned the old-fashion way. Hard work and better ideas. America remains fully the land of opporutnity - fortune are made and lost on a daily basis. Don't waste time resenting the few who did inherit it. Go out and get your own - legally, the old fashion way. Plus this story - he did not inherit his wealth, only the seed money he shrewdly invested. He deserves the rewards since just as easily he could have lost it.

Your ability to rationalize your present position is remarkable. What was true when you didn't have the privilege of inherited wealth is still true, no matter whether or not you change oil on your own cars (which I did just last week by the way).

Factotum your apologist rhetoric is getting a bit stretched. "Only" 1 in 6 dollars are bestowed without merit? Only 1/6 of the nation is getting a free ride? Only you forget that the people who bestowed this wealth were themselves the recipients of previous inheritances or other tricky devices to avoid paying a share of the cost of society . Over time this accumulated inherited privilege has come to run our society--this is not democracy. This is certainly not the "meritocracy" which we have been promised.

RHS: You certainly missed the point of this "lesson." No one can change unless they want to change.....ask any addicted person. Take care of yourself, and stop worrying and "hating" the "other guy" for doing well. Fortunes come, and fortunes go, and with that....have a wonderful day!

Comment about dictatorship is dense. The presidio is the only international historical site in SB other than the mission. Presidio was the seat of government of SB area for 40 years. It brought the larger world and ended the Stone Age Paradise of the local Indians. The stone age indians were highly sophisticated in this region and became part of the historical merger with Europeans. Had they had resistance to measles etc, maybe these stone age people would have had even a great impact. The presidio is a great place: spain, mexico, US all in one. Ceremony looks fun.

The Chumash were not
"Stone-age", but actually quite brilliant.
We created star-maps, practised controlled burns..understanding their benefits, navigated the channel easily, created plant-based medicine, practised all forms of medical procedure, were disease free, were & still are the finest basket makers in America, operated a mint, & the list goes on.
I think that those who left their own country due to oppressive conditions, only to bring those conditions to this land, & then be rescued by said "stone agers"..
Are the true neanderthals.

Please look up the definition of "stone age" before you display your ignorance further. The phrase does not mean the people of that time were bad or inferior. It simply refers to the state of the technology they had developed. All humans in all epochs/ages were pretty much as competent as they are today. We have just had the advantage of their earlier work.

I have several concerns about

I have consistently thought

They will naturalize in your