On July 14, 2021, around 0930am, a Santa Barbara Police Officer was on patrol in the area of Cabrillo Blvd. and Stearns Wharf when he was flagged-down by a community member regarding a subject trying to instigate numerous physical altercations in the area of the Wharf. The Officer attempted to conduct a traffic stop of the subject who was driving a vehicle. The suspect fled west on Cabrillo Blvd in their vehicle, away from the Officer. The Officer lost sight of the vehicle, and responding police units set up a perimeter in the Natoma Avenue neighborhood. The suspect vehicle was located several minutes later, but the suspect had abandoned the car in an alleyway off West Mason Street.

Community members informed Officers the suspect driver fled on foot in the neighborhood. During the investigation, Officers learned the suspect nearly struck a family riding bicycles on West Cabrillo Blvd and ran a red light in the area.

An extensive search ensued to locate the suspect. A homeowner in the 200 block of Bath Street contacted police dispatch to report a suspicious male prowling and loitering near their garage. This description matched that of the suspect.

Officers were able to locate the suspect in the 200 block of Bath Street. He was identified as Jose Luis Hernandez, 27-year old, Santa Barbara resident. Hernandez was placed under arrest for 2800.2 VC – Evading an Officer in a Vehicle with Willful Disregard (felony), 12500(A) VC – Driving without a License (misdemeanor), 23103 VC – Reckless Driving (misdemeanor), and 148 PC – Obstructing an Officer (misdemeanor). Hernandez was booked in Santa Barbara County Jail. Bail is set at $75,000. 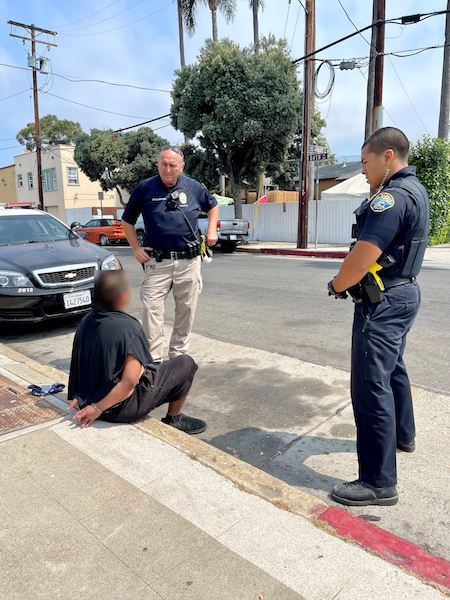 SB Police are searching for a reckless driver who abandoned his vehicle. Suspect is a hispanic adult male in his 40s wearing a black tshirt and is barefoot, last seen southbound on Chapala from Mason.

Zebra 1 is the large bald gent. He's a good guy and one of my friends. A former British bobby and rugby player and one of the kindest, nicest guys i've ever met. he works the beat, also outreach programs for homeless and vets on the street. he's a true police officer in every sense of the word.

How come instead of a mugshot they publish a blurred back of head photo?

That doesn’t seem correct. It’s a public space. No prohibition on photography.

FERNALD - you can't post a photo of someone just being detained in handcuffs without their permission. Ever watch COPS? Once booked and charged, the mugshot is fair game.

What was Starsky and Hutche's handle?

Thats zebra one in case anyone is wondering.

Zebra is used to define a specialized unit within the department. For example Mary 1 is a motorcycle cop. It depends on the department, Zebra could mean an off-duty officer or a neighborhood beat cop, etc.

I saw the zebra one also, but clueless as to its meaning. (My buddy Google didn't help this time either?)

Milli, what is zebra one?

Thanks Roger. & thank God no bicyclist were injured! (that was close)

Who tries to start fights with random people? Is there mental illness behind this? Drugs or alcohol? Is he trying to go to jail? Gang initiation? I will never understand this kind of crap.

I heard code 4, All is Well at Burton and Mason not sure if they caught up with him...Sounds like they did catch up to him.

Gotta get this guy off the road though now he is on foot, police are checking to see if he is the owner of the vehicle..

Police are on foot in the area, the driver almost him children also..

Several other units now in the Area searching for the driver..