The Central Coast Heritage Protection Act, a bill that would safeguard public lands and wild rivers in the Los Padres National Forest and the Carrizo Plain National Monument, and would designate a 400-mile National Scenic Trail, was reintroduced by Congressman Salud Carbajal (D-CA) today.

“Pragmatic policies like the Central Coast Heritage Protection Act make a real difference in the fight against climate change, give residents and visitors the opportunity to appreciate the great outdoors, and boosts our recreation economy, all while preserving the plant and animal life that call these public lands home,” said Representative Carbajal.

The bill, first introduced by Rep. Elton Gallegly (R-CA) and then by Rep. Lois Capps (D-CA), was developed with a diverse array of stakeholders and enjoys the support of more than 500 civic groups and leaders, landowners, businesses, elected officials, schools, farmers and ranchers, and recreation leaders. It passed the House twice last year with bipartisan support as part of a larger package of public lands conservation bills but did not receive a vote in the Senate.

“Building on last year’s momentum in the House, and with President Biden’s and the Governor’s goal to conserve 30% of public lands by 2030, we’re optimistic that this bill will cross the finish line this year, becoming the first wilderness bill signed into law in our region in more than a quarter-century,” said Los Padres ForestWatch executive director Jeff Kuyper. “This effort represents twelve years of constant pressure from an ever-growing coalition. It’s gratifying to see what can evolve from a few folks around a picnic table talking about the future."

The Central Coast bill would protect nearly 250,000 acres of federal public land across Santa Barbara, Ventura, and San Luis Obispo counties, safeguard 159 miles of wild and scenic rivers, and establish two scenic areas encompassing 34,500 acres. It would also designate a 400-mile Condor National Scenic Trail that would stretch across the entire length of the Los Padres National Forest, from Big Sur to the Los Angeles County line. View an interactive map of the lands, rivers, and trails that will be protected by the bill once it becomes law.

Lands Proposed for Wilderness Designation Include: 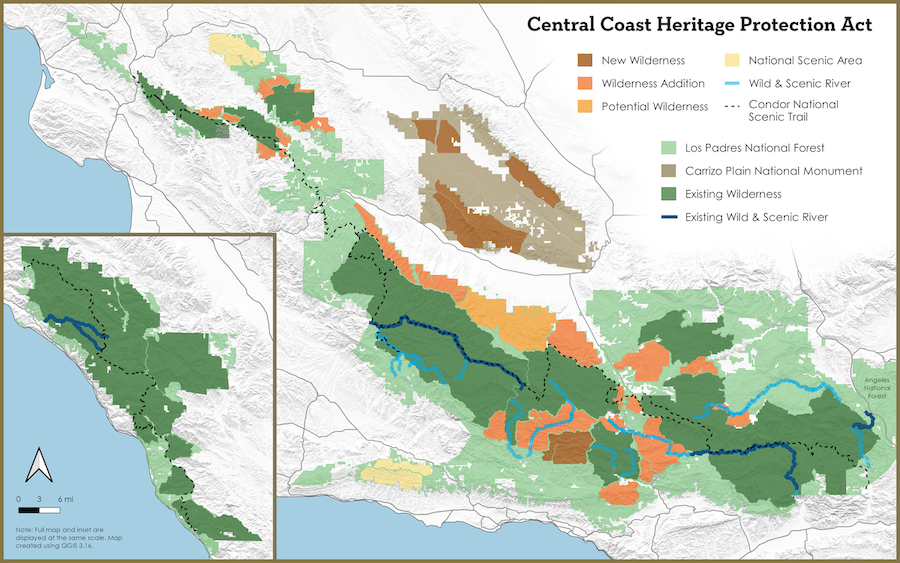 “Residents of the Central Coast understand the vital role that access to our wild places plays on our quality of life, health, and the economy,” said ForestWatch director of youth and community engagement Graciela Cabllo. “This bill would help protect some of our most critical assets—our air, water, and open space—for our communities and future generations.”

Both Carrizo Plain National Monument and Los Padres National Forest are threatened by oil development and a logging project proposed for Pine Mountain, includes large swaths of land that would be protected as parts of the Sespe Wilderness. The bill would permanently ban these activities and any other industrial activity from protected lands. The wilderness additions include and connect some of the last and best unprotected wildlife habitat in the region and would play an important role in providing refuge to wildlife suffering from the increasing impacts of climate change.

"This bill would bestow the highest level of protection for national forest land in areas that support an incredible diversity of ecosystems,” said ForestWatch conservation director Bryant Baker. “From chaparral in Matilija Canyon to pinyon-juniper woodlands in the Cuyama River basin, from stands of blue oaks in the La Panza Range to mixed-conifer forest on Pine Mountain—habitat for hundreds of species will be safer from damaging activities for generations to come."

The Central Coast bill is the product of years of discussion and negotiation that began in 2009 when ForestWatch teamed up with The Wilderness Society and the California Wilderness Coalition to identify lands in need of additional protection. The last bill designating wilderness in the Los Padres National Forest was signed into law in 1992, nearly 30 years ago.

Vice President Kamala Harris sponsored the bill during her tenure as a California Senator part of a larger package, the PUBLIC Lands Act. Advocates are hoping that her successor, Senator Padilla, will usher the legislation through the senate to President Biden’s desk.

Wilderness designation is the highest land protection offered by the U.S. federal government.  It bars all industrial activity, the use of motorized machinery including automobiles and chain saws. Visitors are asked to adhere to leave-no-trace practices. Horseback riding, leashed pets, hunting and fishing, canoeing and kayaking are some of the activities that are allowed in wilderness areas. Wilderness designation does not prohibit actions to control wildfires. In fact, by restricting road building and logging, wilderness areas are known to experience less frequent and less intense wildfires.

Only lands that are unmarked by industrial activity or development including roads can be considered for Wilderness designation. Very few lands remain in California that fit these criteria.

The Central Coast is a top tourist destination because of the region’s iconic scenery and world-class restaurants, wineries, and breweries, which yield clear benefits for the local economy. Increased tourism and outdoor recreation opportunities through public lands protections will provide an additional economic boost to local communities, particularly in the area surrounding the Los Padres National Forest. According to the Outdoor Industry Association, outdoor recreation generates $92 billion in consumer spending and 691,000 direct jobs in California.

Thank you for protecting land.