Can Giant Kelp Be Restored Off Goleta Beach?

Bob Kiel spent his childhood diving and surfing off Goleta Point, blissfully exploring the massive kelp forest that swelled in the offshore swells of the bay. Now the underwater forest is gone, and Kiel is trying to bring it back against all odds.

The El Niño storms of 1983 decimated the kelp beds of the South Coast, and at Goleta Bay, they have never recovered. Since then, the beach has largely vanished, too, except at very low tide. 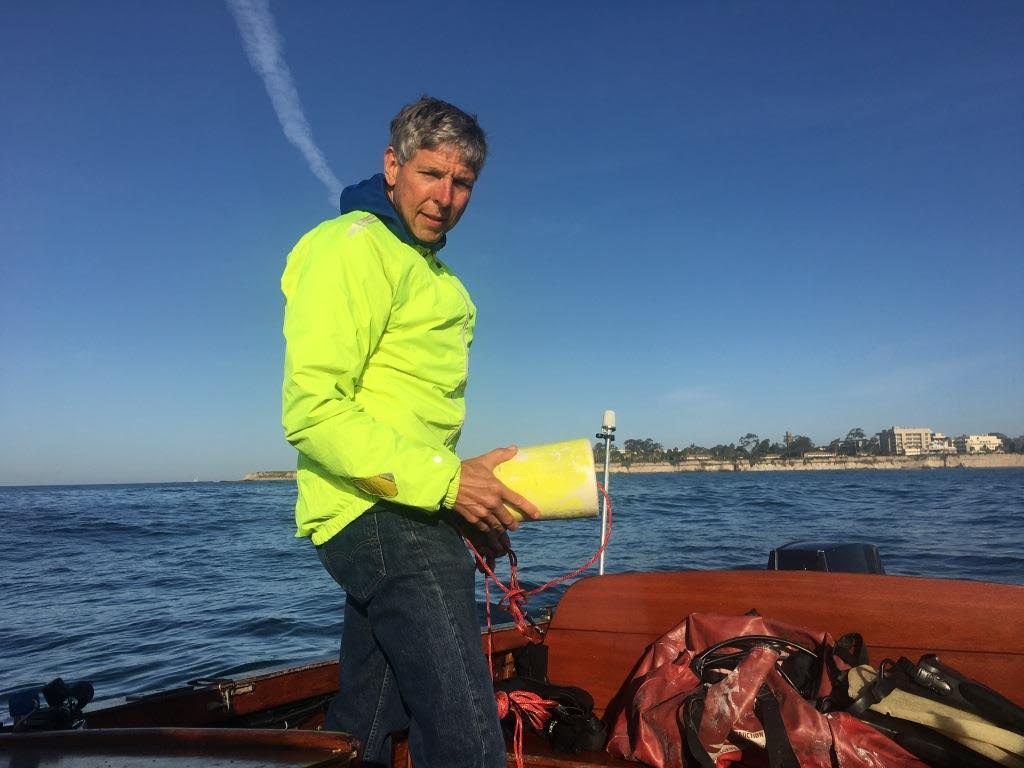 Bob Kiel prepares to set buoys before diving into the frigid waters of Goleta Bay. Photo by Kelley Kiel.

“Why is that beach now chronically narrow?” Kiel asks. “We didn’t see such intense erosion in the decades when the kelp bed was there. It was so big and dense, it was like being in a forest of giant Sequoias. It may have altered the hydrodynamics of the bay.”

Kiel, 58, is the chief engineer at the Seattle Aquarium, but he spends his vacations diving at Goleta Bay, working on a three-year pilot project that he devised on his own to re-establish giant kelp there.

“Ever since I can remember, all I wanted to do was explore what was beneath that water,” he said.

Kiel’s project was approved by the state Coastal Commission and financed in part by a $15,000 grant from BEACON, a state agency that oversees beach nourishment programs from Pt. Conception to Pt. Mugu - but not for the purpose of restoring Goleta Beach. Studies show that severe storms erode beaches equally whether kelp beds are present or not, BEACON officials said. But Kiel’s project, they said, may demonstrate a way to bring back a healthy kelp bed and, in so doing, benefit marine life and recreation.

Kiel says he’s spent thousands of dollars of his own money, too, traveling to Santa Barbara, buying materials and renting dive gear.

Last year, Kiel and his childhood friend Greg Christman, a Santa Barbara architect, made 20 difficult dives in the cold and murky water of the bay at depths of up to 55 feet, water-jetting 204 short granite columns into the sandy bottom for giant kelp to grow on.

Kiel installed the first column on the same longitude as Ardmore Drive in Goleta, where he grew up and his mother still lives. The columns measure two inches by two inches by 36 inches, with six inches protruding above the sea floor. They are 20 feet apart and are located mostly in the middle of the bay.

Most kelp beds grow on rocky reefs. On the sandy bottom of Goleta Bay, the spores of giant kelp historically settled on delicate worm tubes – until the storms of 1983 obliterated the underwater forest. The bottom is virtually barren of plants now, and Kiel hopes the granite columns will provide a toehold for the kelp to grow back.

“The columns are extremely resilient to the forces at work out there,” Kiel said. “They can allow the kelp fronds to grow to the surface and not break off at the base like they do with the worm tubes.” 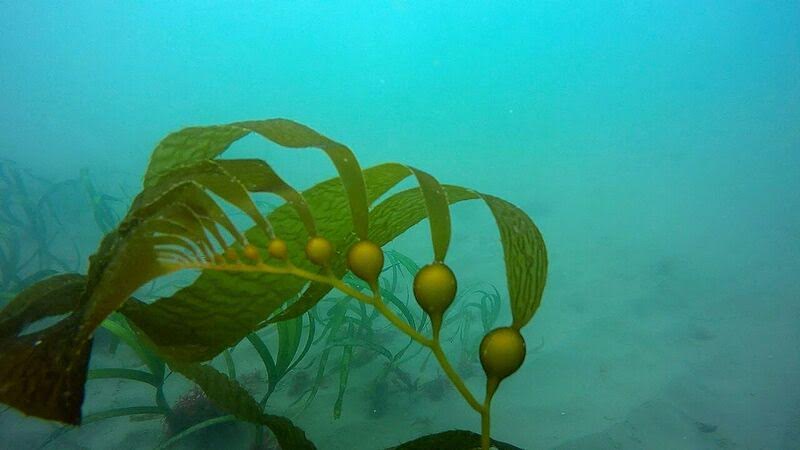 The divers found a couple of 20-foot-long kelp fronds like this one growing on the granite columns they installed last year. Photo by Greg Christman.

Kiel’s project appears to be the first to use granite columns for kelp restoration, said Nancy Caruso, a marine biologist and the founder of Get Inspired! Inc., a Garden Grove, Calif. nonprofit group that runs kelp and abalone restoration projects along the coast of Southern California.

“I think it’s got a lot of merit,” Caruso said. “Putting kelp forest in of course will help erosion. Kelp stops wave energy from moving toward the shore.”

In the early 2000s, Caruso launched a project in which 5,000 schoolchildren grew kelp on bathroom tiles in the classroom, and 300 volunteer divers attached the tiles to underwater reefs with rubber bands offshore of Orange County. The local kelp forests, decimated by the storms of 1983, have since made a big comeback there, Caruso said. But restoring kelp on a sandy bottom, she said, could prove more challenging because the columns might get buried in the shifting sand.

Historically, geologists say, Goleta Beach was replenished with Santa Ynez River sand that made its way around Point Conception in the ocean currents. That supply, they say, was cut off when the river was dammed to create Lake Cachuma.

Kiel is not sure the geologists are right about the flow of sand down the coast. On his dives, he says, he’s seen a huge reservoir of sand in Goleta Bay that is not getting to Goleta Beach.

Since the mid-1990s, the County of Santa Barbara has transported a million cubic yards of sand and mud to help replenish the beach – the equivalent of about 5,000 truckloads per year. The sand eventually washes away, sometimes within 24 hours. Absent a beach to absorb the force of the waves, record high surf in recent years has clawed out big chunks of the low bluffs that form Goleta Beach Park.

Kiel dreams about someday installing 30,000 columns to support a giant kelp forest over more than a square mile of Goleta Bay – but first he has to get some results. During six monitoring dives to the sea floor in April, he and Christman found mollusks and crabs on many of the granite columns, but kelp fronds on only six of them. Two fronds were 20 feet long. Several dozen columns were covered with a film of algae that might have been kelp.

The kelp holdfasts, or root-like structures, that the divers had seen growing on a dozen columns last June, supporting fronds 10 feet long, were dead, Kiel said. The only place where kelp was flourishing, he said, was on the rock piles covering the Goleta Sanitary District’s outfall, the pipeline that ships treated wastewater offshore.

“Those plants are doing really well,” he said. “I would have liked to have seen ours look a little better.”

On the plus side, the columns themselves showed no signs of dislodging. Kiel and Christman plan to check them every six months for the next two years.

“We just have to see how it plays out,” Kiel said.

[Editor’s note: An earlier version of this article mischaracterized the state Coastal Commission’s and BEACON’s support for Bob Kiel’s kelp restoration project.They supported it in order to test a simple way of re-establishing a healthy kelp forest and, in so doing, benefit marine life and recreation. They did not support the project for the purpose of restoring Goleta Beach.]

Went for a low tide walk at