The Water Gum is as close as you can get to a “perfect tree” for ornamental purposes in Santa Barbara.  It has beautiful green foliage all year long, has attractive fragrant flowers, is tolerant of both dry and wet conditions, grows in almost any type of soil, is essentially insect- and disease-free, tolerates pollution and, perhaps most importantly, is almost maintenance-free.  It checks all the boxes to qualify as a great tree to plant in our home gardens and on our streets.

Locally, it will grow to be a small- to medium-sized tree, ultimately reaching a height of 20 to 30 feet with a spread of 15 to 20, but it can grow larger in irrigated or wet areas.   While it develops naturally as a multiple-trunked tree, it can easily be trained to have a single trunk - useful for placement in narrow spaces or for use as a street tree.  It will create a compact dense canopy, which can be thinned out nicely.  It does have a rather slow growth rate. 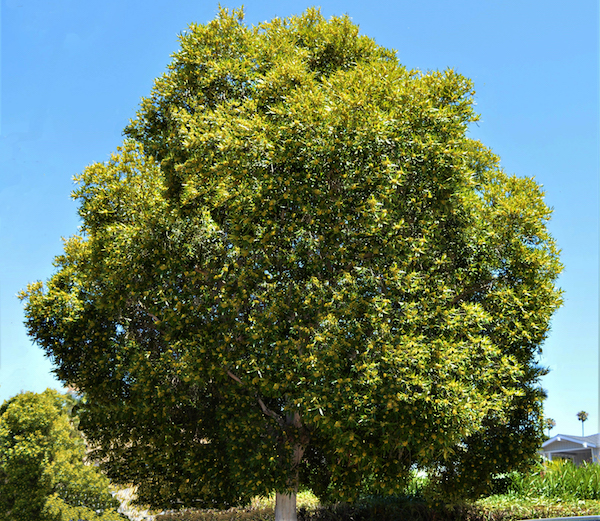 Its evergreen foliage is composed of narrow lance-shaped leaves (3 to 5 inches long and 1/3 to ¾ inches wide). These are a glossy dark green above and a lighter green on the underside and emerge alternately on the twigs.  Interestingly, new twig growth is a dark purple at first - changing to a tan-gray with age.

Bright yellow flowers (tiny, only up to ½ inch across) first appear in clusters called “cymes” (meaning flowers on the terminal tips of the twigs) - these are followed by additional lower peripheral flowers on lateral stems.  Flowers are most prolific in July and August but can bud at other times of the year.  While each flower is small, the sheer abundance of them can provide a dramatic effect when the tree is in full bloom.  The production of abundant sweet nectar and generous pollen attracts large numbers of honeybees.  After the flowers are pollinated, light brown seed capsules mature - these are woody, bell-shaped, and up to ¼ inch in diameter.

Bark on a young tree is a light tan color that turns gray over time.  It sheds in large patches - giving the trunk of a mature tree a handsome mottled look.

It is native to the east coast of Australia, from Queensland to Victoria.  Because it is often found growing there in wet areas and along creek banks, it has earned the common names of “Water Gum”, “Swamp Myrtle”, and “Kanooka”.

It is in the Myrtaceae (Myrtle) plant family, so it is related to Eucalyptus, though it is much better behaved.  Its botanical name is now Tristaniopsis laurina - before reclassification 1982 it was known as Tristania laurina. The genus name, Tristaniopsis, honors the French botanist Jules Tristan (1776-1861); the suffix “-opsis” means that it “looks like” Tristania.  The specific epithet, laurina, is Latin for “laurel-like” - referring to the fact that the foliage is like that on true laurel trees. 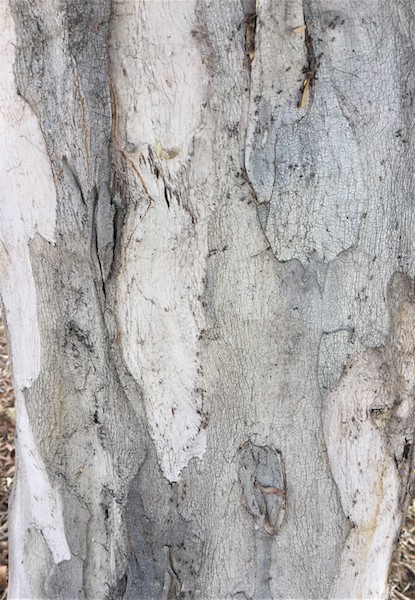 Since Water Gum was first introduced into the California nursery trade in 1963, there have been several cultivars selected for propagation.  The one best known is ‘Elegant’ - it has thicker and glossier leaves, reddish-colored new growth, and a more robust and stately appearance.

Water Gum should be planted in full sun to partial shade.  As its name would imply, it prefers moist locations, although once established it does not need additional irrigation.  It does exceedingly well in our Mediterranean climate because it can endure our long dry periods.  It will tolerate almost any type of soil, provided there is adequate drainage.

Being a low-maintenance tree (dropping little messy litter and needing only minimal pruning to shape it when young), it is highly recommended as a fine landscape tree.

Mature Water Gum trees can be seen (mixed with Brisbane Box trees, Lophostemen confertus) on upper State Street (between Ontare and Hope Avenue) and on the 1600 to 2100 blocks of Anacapa Street.  The best examples of young vigorous specimens can be seen in the 1000 & 1100 blocks of East Mason Street and on Wilson Avenue.

Poor Bear...I wish we had