By Heal The Ocean

An abandoned homeless camp surrounded by trash, bicycle parts, car batteries, flooded tents, and other offal became an eyesore on the “Graveyards” beach in Montecito, at the base of the cliff below the Santa Barbara Cemetery. Heal the Ocean got a call about it from a concerned citizen, on Thursday, January 7, 2020. It took all day Friday to figure out how we could legally do anything about it – one cannot remove a homeless camp in use.

Then we learned a King Tide, the highest and lowest tides of the year, would arrive along with high surf warnings on Monday morning(today, as this bulletin is being written) and Tuesday (January 11-12, 2020).  The King Tide is about a foot or two higher than average tide levels. Knowing that everything in this camp would soon be swept to sea, HTO Advisory Board member Harry Rabin alerted HTO Executive Director Hillary Hauser, on Saturday, that something must be done about it.

Being Saturday, it was difficult, if not impossible, to reach any official for permission to clear out the wreckage. While Harry made calls to fire and sheriff officers for help, Hillary got on the phone to find a cleaning crew or junk hauler that could help to carry the stuff away, just in case we were able to act.

Harry Rabin is the real hero in this case – he refused to give up. (By 2 p.m. Saturday, Hillary despaired of getting help from anybody). Finally, Harry got the help of two County sheriffs, who came to meet Harry at the site, to inspect the camp, verify that it was abandoned, give the OK and then open the gate into the Clark Estate field for truck access to the camp.

By then Hillary had engaged Big Green to come with trucks and workers to do the bagging and hauling. (Big Green is under contract with the City of Santa Barbara to do beach cleanup work in this area, but the camp was on the County side of the coastline, and the County does not have such a program, nor the funding for such cleanups.) The workers at Big Green had been working all day, and some had even gone home for the evening. But they reversed gear and arrived en masse to the site and jumped into action. By sunset, the mess had been loaded into trucks and driven away – less than 48 hours before the high tide hit on Monday morning. 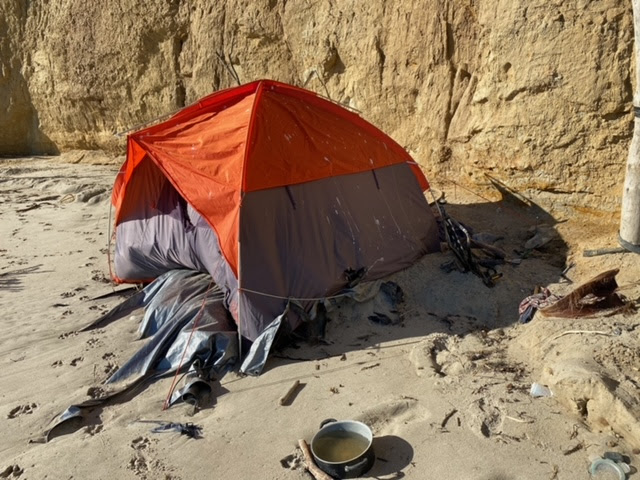 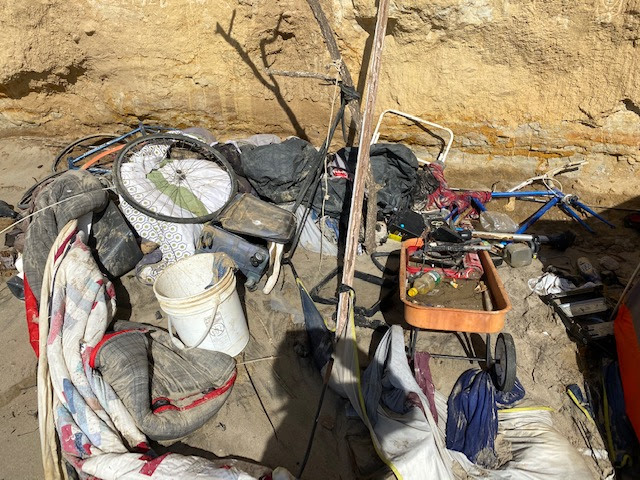 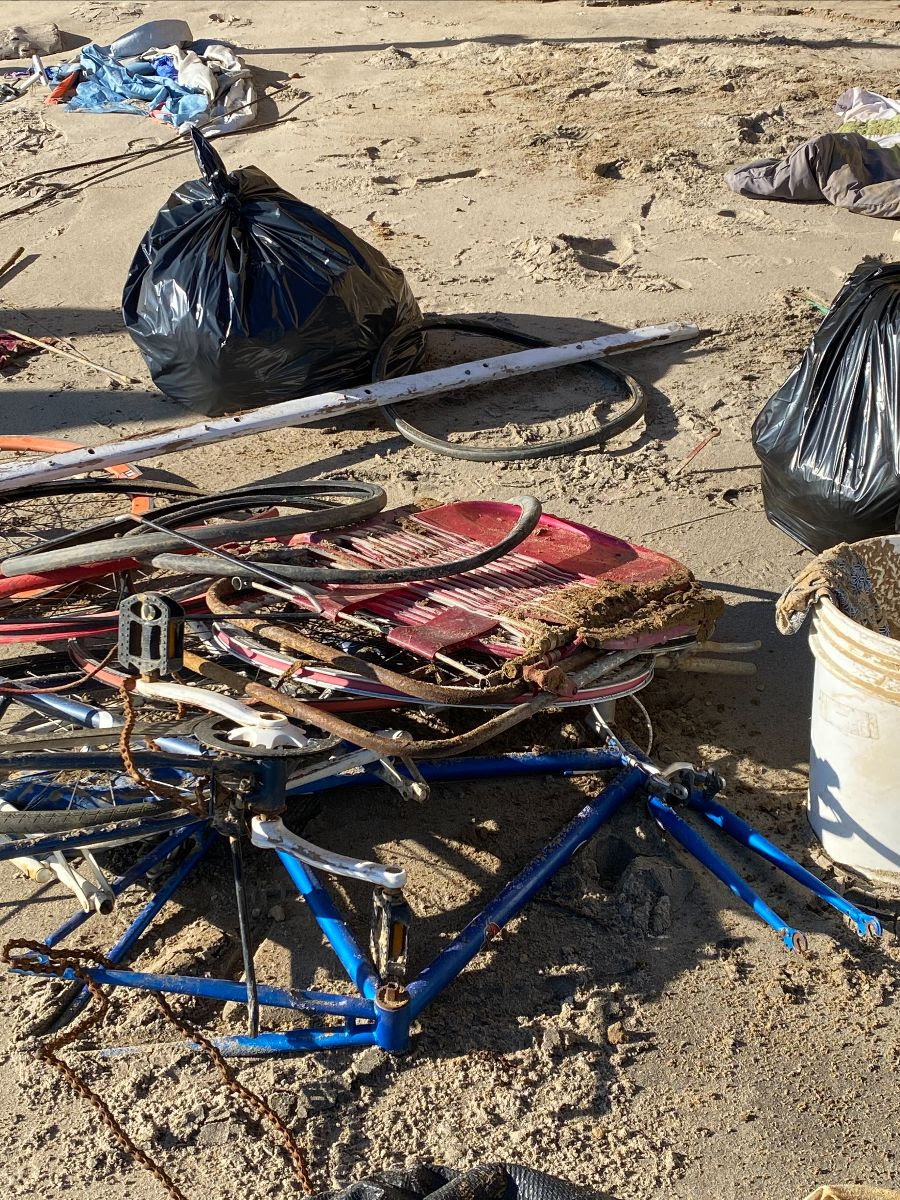 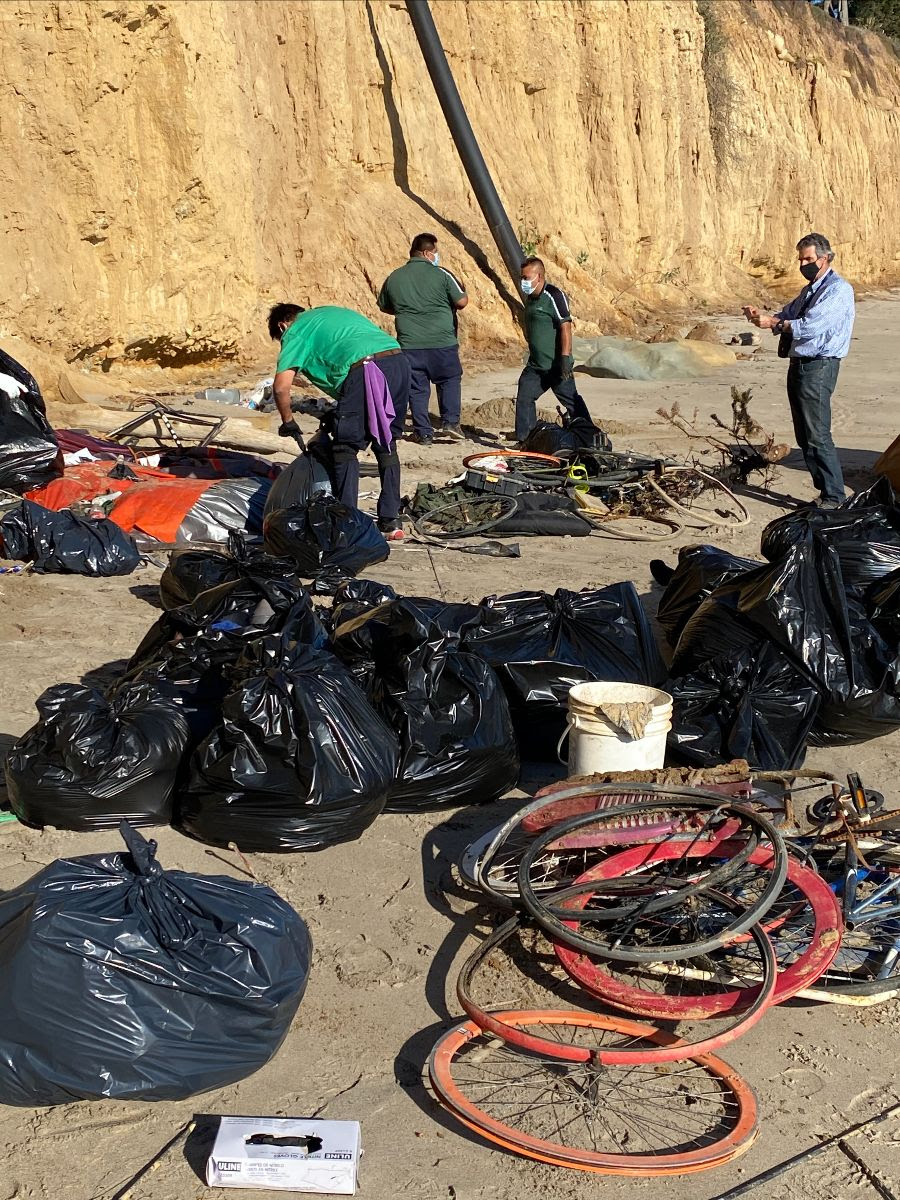 Hillary and Harry have joined a working-group organized by Santa Barbara City and County fire chiefs to work on the problem of homeless encampments in problematic and sensitive areas. For the fire chiefs, the big worry is about these camps starting fires that can become instantly threatening to the Santa Barbara community – city and county. HTO’s concern is that homeless camps – which have no sanitary facilities - should not be parked on beaches or near storm drains, in creeks, or other watersheds as they pose a risk to water quality and environmental safety. 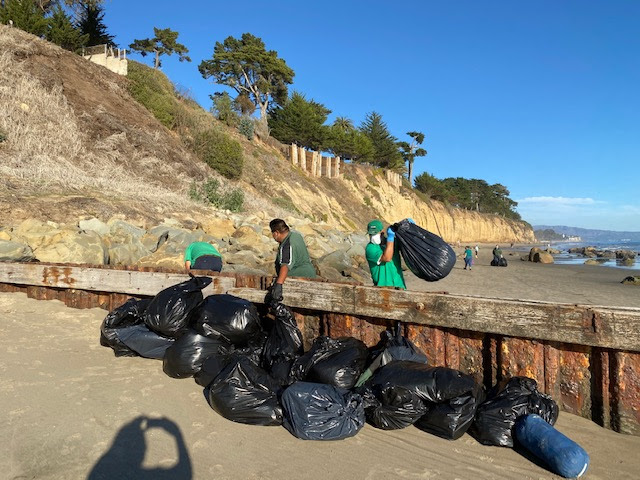 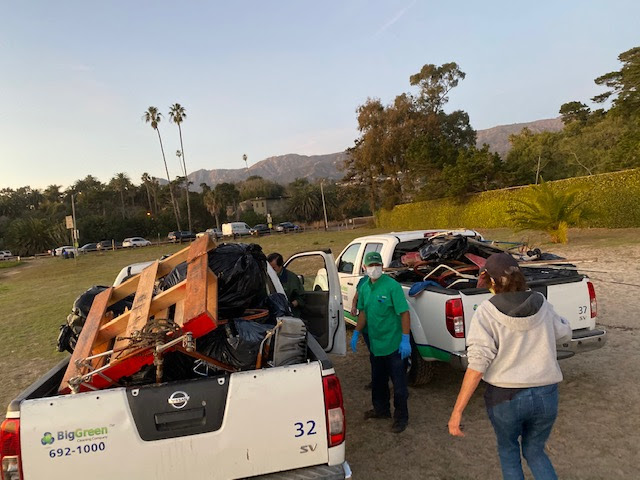 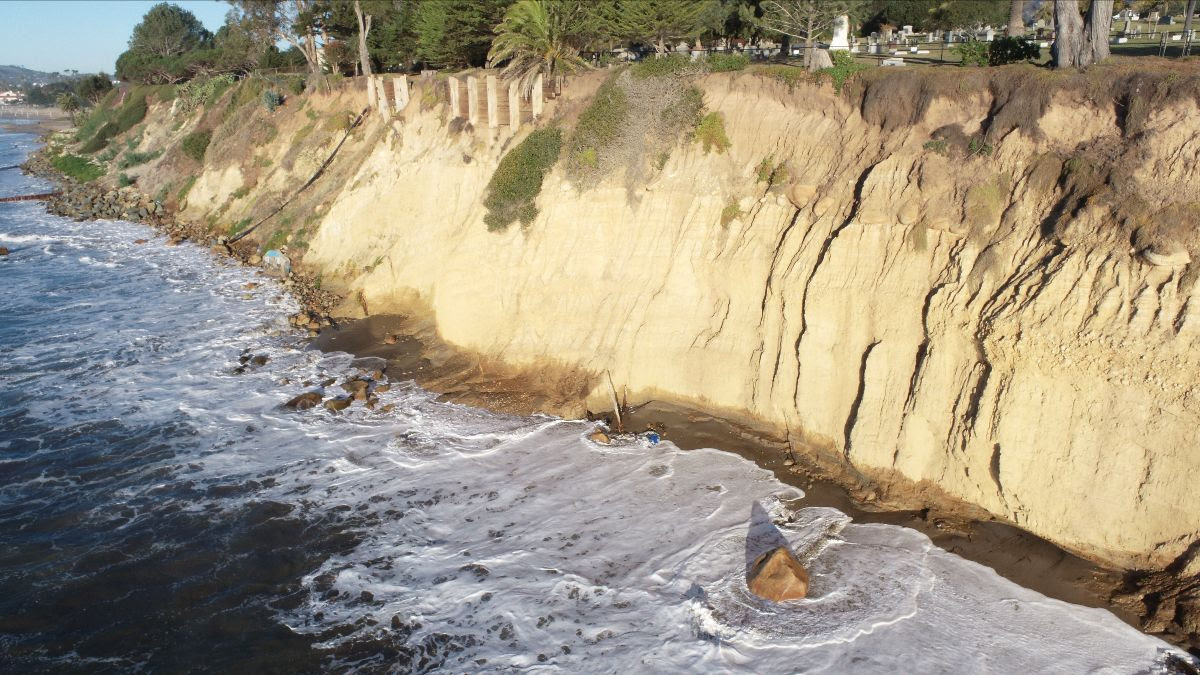 Heal the Ocean gives big thanks to Mark Walker, the citizen who called us about the situation, and to the County Sheriff department as well as Big Green, for helping on such short notice.

Thank you to everyone who worked hard to keep the Ocean clean.

Thank you so much to everyone who did all that work! I’m impressed and grateful.

Thank you Team Heal the ocean. Also, thanks for showing how ineffective our city/county is a getting things done. Kudos to HTO. Shame on our tax payer funded city officials for their inability to do this themselves. It shouldn't have to take a non-profit working through the weekend to get this done.

Right on Bosco, you summed it up. Couldn't agree more.

Crazy to see all of these hardworking people having to play housekeeper for drug addicted vagrants. I applaud all of them. Let's do something to stop this from happening in the first place.

Thank you heal the ocean, SB take note on how to get er done and let’s not allow this beautiful stretch of beach get that bad again.

So happy to see that the "powers that be" allowed these good people to clean up all that crap. Thank you. Looks like a lot of stolen bicycles.

Thank you for doing this work. Maybe if volunteers picked a site each weekend and did the same thing, we could rid community of these homeless camps and force these people into shelters.

They could only do this because the camp was abandoned. They can't do it if people are living there without police intervention. Police are only intervening at selected spots.

Interesting use of high tides. Swoop in and move there stuff while there not able to be there

HUGE thanks to Heal the Ocean...that is awesome!!!

Hammond's already has terrible water quality - we didn't need all that crap adding to it. Thanks HTO. And where were you city of SB? Cathy? Anyone....?

Cathy only comes out for ribbon cuttings

Just made donation to Heal the Ocean. That's a good way to praise their actions.

Big thanks to Hilary Hauser and Heal the Ocean volunteers for cleaning up that mess!

Anybody missing a bike? Bike theft ring is not only evident but screaming-in-your-face obvious in these encampments. Our family was a victim of bike theft near the East Beach parking lot in 2018. Vagrants had already taken over. Current issues are a continuation (this has nothing to do with COVID). 2018: Vagrants in a dome tent in the sand near the bike path with a stack of wheels and bike frames on a tarp in front, and shady vagrants looming about near the bike path. A police report was filed and nothing has been done. They're still at it!

Re. Bike theft ring. Forgot to mention their associates in vans in the parking lot. One of these guys offered us a bike after seeing how upset I was! (and that I had started taking pictures of his van). These same criminals can be found on Soledad between Franklin School and the Eastside Neighborhood Park. Go take a look!

Three cheers for Hillary Hauser and our Sheriffs who finally took the time, maybe their own time to deal with this issues of highly risk lifestyle being "tolerated" instead of remedied. Our oceans cannot be next as I have seen in other countries where trash is simply tossed into the sea with tides. Our whale community (Gray) stir up oceans to dsitribute nutrients to themselves, other fish and birds.
These folks need a well managed tent /yurt city so we can stop real pollution, crime, and assault at our beaches. "Homeless do not harm.." This is a myth--look at fire damage and wasted law enforcement. Lots of empty buildings now--and people needing work. Some of these are homeless people too with good conduct.
Bless you Hillary for keeping the light on this dark difficult area of community life. Let's solve the right problem.

It's absolutely insane that the city and county isn't doing anything about this. Big thanks to Heal the Ocean and the Sherrif's office for stepping up...now it's time for our elected to officials to start stepping up as this is their RESPONSIBILITY!!!!!!

There are several now off the laguna garden exit, I can see bikes up there

How do the wealthy Montecito residence walk by that scrap everyday on there morning walks, why dont they spend some of their monies to clean up that scrap or get in touch with Beannie Baby who's estate sits directly above this camp...Get his gardners to clean it up on his behalf....Oh, because its the same reason you can barely get the City of SB to clean anything up...Greed, pass the buck mentality, and my fav. "Dillusion of Granger". But this is just the beginning as everyone sees that the homeless situation and Zombie appocalypse is definitely happening and the states have no money to help a fraction of these people that are willing to get help!!!