The Santa Barbara City College (SBCC) Sports Pavilion will be demolished and replaced with a $40 million athletic complex.

The State of California approved $31.9 million for the project and SBCC will contribute $8.1 million. The current Sports Pavilion does not include disability access and has a variety of repairs needed. The State program aims to replace buildings where it's cheaper than tending to repairs.

At the SBCC Board of Trustees meeting on Thursday, Steve Flanagan from LP Architects (LPA) presented construction and design options to be reviewed.

The State allocated funds are for the replacement of the building and require the same square footage in the same location on Loma Alta Drive. Flanagan proposed demolishing a portion of the area to keep the gymnasium open while they build the new gymnasium next to it. 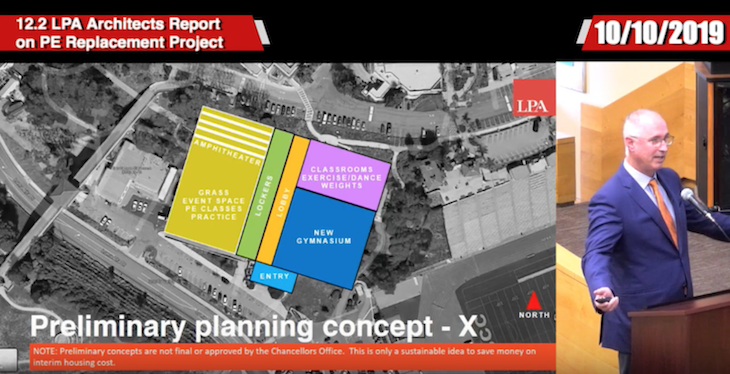 Screenshot from Thursday's Trustees meeting showing a preliminary mockup of the design on the left and Flanagan on the right (Photo: YouTube)

Trustee Marsha Croninger expressed her concern for the designs that were shown in past LPA projects on city college campuses. "Your examples here are dramatic and very modern. This is not a dramatic very modern town, this is a Spanish mission colonial revival town. I would foresee a significant amount of community controversy if we put a very modern building in that highly visible location," she said.

Flanagan emphasized the photos used are examples of past projects and have plenty of mission and Spanish style projects they've completed.

LPA is in the preliminary stages of this project but the current timeline has it completed between 2022-2023.

Per the article, sometimes it's cheaper to spend money. ... "The current Sports Pavilion does not include disability access and has a variety of repairs needed. The State program aims to replace buildings where it's cheaper than tending to repairs"

If you look on google maps street view, there is handicapped parking on the lower lever with ramps to gain access to the lower gym, training room, dance studio, lockers. If you look at the aerial view, you will see the ramp from east campus that zig zags down the the classrooms and upper gym area. I think that just about covers the accessibility portion. You can retrofit elevators into existing staircases for the $10's of thousands but surely not cost $10's of millions.

Eastbeach, can't you read between the lines of these press releases? It is always said that the choice made was the best choice. We do not have information to inform us as to whether or not this is true. Perhaps it was cheaper to add disability access but they won't tell us that because they wanted a shiny new gym.

What is that huge ADA ramp leading to the building for for?

Wow. So remember Measure S? Part of the alleged need for that bond issue was to create ridiculously irrelevant sports facilities. The proponents of the bond argued they could not finance them without local taxpayer obligations. People voted no on S. Major reasons were that the sports complex ideas were not needed for the mission of a community college and that we had already agreed to a previous bond to repair infrastructure but that money was used to fund the press box at the football/track field. So here we go again. Who is pushing the idea that SBCC should be emphasizing training of athletes for the ridiculously few job openings this industry provides? Jocks are running too much of the SBCC agenda. I am disappointed in the SBCC Board for allowing this application to begin with and for then obligating the community to pay the balance. As noted, there is no free money.

Here is one vote to make it look modern. This is not the downtown historical zone. Last I checked it was 2019 and not 1819 sheesh.

How about some parking for all those students? They fill up all the public lots and neighborhood parking. It’s impossible to park down by the waterfront when school is in session.

Readers- on Monday - a legal holiday- at 4:30p SBCC gave Public 24-hour Legal Notice of an “Emergency” Meeting hoping few would hear about it to attend. The so-called “emergency” was not an emergency. Rather, a meeting to cut $3.2M from SBCC’s deficit budget by hiring a pricey firm to ask experienced proven faculty to take early retirement. The real goal is to allow the newer, 70 militant faculty who have taken over SBCC and its Faculty Senate to take control, while the local public is asleep failing to monitor SBCC underhanded activities or demand excellence for our 7000 LOCAL STUDENTS within its boundaries, as is the purpose of each of 116 CA community colleges. Cut $3.2 from teaching but find $8.1 for recreation. EdHat: Confirm that donors are providing this amount.

Conspiracy theories abounding. How do you sleep at night? Really the goal is to get the higher-paid professors to retire and save money that way. Not so scary, is it?

How can the college that is currently sobbing about a huge deficit--so big they are offering another financial incentive to retire--spend that kind of money on athletic facilities? (And after they spend $1M on a new press box; will that be replaced too?)

When the state grants you 80% of the cost of something that big, you make it work.

For the students who pay to go school. They deserve a place that is safe to exercise and stay healthy while earning an education to better themselves and our community. For the parents and fans who attend events there. If the building isn't safe, who would want to go inside. Can u say Earthquake? This is a great thing and SBCC is hardly paying much of the huge bill and the students will get to benefit from this new Pavilion for decades!

To me, the bigger question is: What is this obsession that saddles scolastic venues with hugely expensive semi-pro facilities that only the few who make it to the pros benefit from? Professional sports should pay for their "farm team" facilities. Intercollegiate and recreational places for student use don't require state-of-the-art buildings.

It's free money! Doesn't even come from taxes or anything, it grows on trees. Definitely it is costing someone, and that someone is us.

Remember next time there is a bond measure. Remember that "free" $31.9mil is from your taxes, yet you are the one suffering the increased traffic and housing costs to subsidize SBCC.

But what's that?! I think I just saw some Russian collusion over there!

I'm going to be really offended if they take the very classic gorgeous architecture of the current Spanish style Pavilion and turn it into a beautiful modern piece of architecture. Are they joking? The old one looks like a prison library. Anything will be more beautiful than that. Hopefully they'll do something really nice with the Governor's free cash. I do love how the ADA thing requires a $40mm fix. They can't just erect an attached elevator shaft, fix the roof, and call it a day?

Sure. Save money by spending $40 million instead of -----really? It would cost more than $40 mil to make the repairs?