The Santa Barbara County Fire Department officially mapped the size of the Happy Canyon brush fire at 26 acres. The cause is still under investigation.

At 7:30 a.m. Saturday, Santa Barbara County firefighters responded to a report of a vegetation fire in the 3500 block of Brinkerhoff Ave, northeast of Santa Ynez. Units were unable to locate the fire due to fog, reports Captain Dave Zaniboni.

At 8:30 a.m., crews discovered a fire burning in grass and light brush on Happy Canyon Road, northeast of Santa Ynez on a ridgeline.

The fire is estimated at 10-15 acres and forward progress has been stopped. Full containment is expected shortly. Approximately 30 personnel is on the scene with earlier help from a helicopter that made a few water drops before being released, said Captain Zaniboni.

There were downed power lines in the area but an official cause of the fire has not yet been determined. There were no reported injuries or structures threatened. 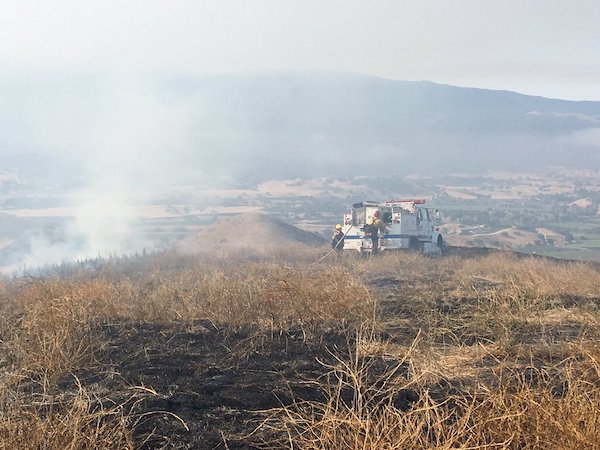 Happy they got it out before it turned into many more acres. I'm over this fire season now bring the rain back please.

Yeah, but the bugs HUGE back