In the early morning hours [Tuesday], a 150-foot long glass and steel passenger jet bridge arrived at Santa Barbara Airport on two long semi-trailers all the way from a manufacturing facility in Ogden, Utah.  A 95-foot high crane is onsite to hoist the jet bridge into position and complete the final piece of construction of the airline terminal building that opened in 2011.  The installation and certification of the new jet bridge are expected to be completed in mid-December.  Upon completion, SBA will have a total of four jet bridge boarding gates and one ground boarding gate, as was originally designed for the airline terminal.

Many travelers over the years have wondered about the absence of a Gate 3 and the quizzical labeling of Gate 4 as “Gate 3 & 4.”  It was the result of a conundrum faced by airport officials back when the terminal was nearing original completion.  Air travel was still suffering the impacts from the last national economic recession.  City officials then made the decision to defer the purchase of one jet bridge until air travel rebounded.  More than eight years later, SBA is breaking all historical passenger records and the final jet bridge will be installed in time to welcome 2019’s one-millionth passenger, expected to arrive in the month of December.

Santa Barbara Airport’s passenger jet bridges are otherwise notable because of their glass and steel construction, even today very uncommon at commercial airports.  “City leaders knew back then that visitors’ first impressions of Santa Barbara would form coming off flights and looking at the striking Santa Ynez Mountain views,” said Henry Thompson, Airport Director. “It’s a testament to the foresight of City leaders to build a facility worthy of such a beautiful city.”

The cost of the passenger jet bridge is $1.2 million and is funded by a grant from the Federal Aviation Administration, along with a nearly 10% matching investment by the Airport.  The Airport’s share of the jet bridge investment is in turn supported by income from commercial air service operations, not local tax dollars. 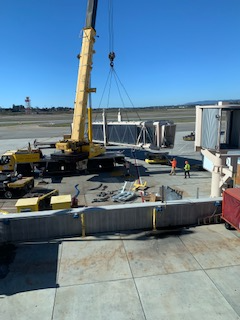 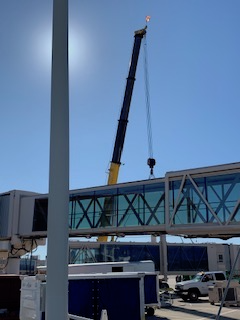 Visitor first impressions and locals last impressions are determined by airport design and services. 1) The absence of a restaurant accessible to ALL at the airport is a huge mistake: flights are delayed and families leave the airport to dine on Hollister at the Flightpath or elsewhere. 2) Locking bathrooms and baggage claim prior to 1 hour after last flight arrives leaves passengers cursing Santa Barbara City and airport officials. Both are locked within 15 minutes leaving Passengers with a choice: relieve yourself in restroom or get your luggage before you’re forced to leave without it. Que sera. Every person approached at the Airport points fingers saying carriers are responsible while carriers say City is to blame. Doesn’t matter. IMPRESSION of the airport is a basic intro into ‘the new’ poorly managed and designed City of Santa Barbara. Arriving downtown into gridlock on old narrow streets while unsuccessfully seeking a parking slot to check into a $500/night hotel room leaves a lasting impression. The topography and natural beauty are exemplary. SB negatives are facilitated by recent Council decisions over the last twenty years.

Next time I'm boarding I'll make sure to truly appreciate looking out at the runway through the glass. It's funny, but about to board and standing in those jetways, one gets the sense that something's different. Now I see it! Cool.

It's surprising how little the jet bridges have been in use for many of the flights taken at SBA this year. Must cost extra to employ them? This goes for arrivals and departures. Why aren't they used more often?

A-1576518182 and yet there is an ever-increasing demand of people wanting to be here and returning and returning here. My guess the reason is that wherever the visitors are coming from, it is much much worse .

Shot a minute . Liquor is

I suggest we consider no

@pitmix still safer having a

Here we go. This is going to

Yo white beard, it's pong

The main risk of getting CV

This is a horrible idea, will

And this attitude is why we