Outcomes of a Wet Winter

News Report
byMelinda Burns
7 Comments
Reads 4193
Pat McElroy, executive director of the Partnership for Resilient Communities, says the nonprofit group is set to install a steel-wire barrier, or ring net, to trap debris at this location on San Ysidro Creek, north of the San Ysidro Ranch. By mid-May, McElroy says, the group plans to install six nets on three creeks, including Cold Spring and Buena Vista (Photo by Melinda Burns)

Seventeen storms, 32 inches of rain on the mountainside, and three large-scale evacuations have kept South Coast residents on edge this winter, especially below the burn scar of the Thomas Fire.

Since the rains began in mid-November, county crews have cleaned out the debris basins in Montecito and Carpinteria nine times, carting away about 11,000 truckloads of mud, boulders and fallen trees that have washed down the canyons and into the urban area. The cleanup has cost the county $2.6 million.

To catch even more debris in future storms, vowing that “we can’t do nothing,” the Partnership for Resilient Communities, a nonprofit group founded by wealthy Montecitans, has raised $4.4 million and is looking for $1 million more to install six steel-wire, fence-like “ring” nets across Cold Spring, San Ysidro and Buena Vista creeks by mid-May. Test soil drilling is expected to begin next week.

Meanwhile, nature is healing itself. For the first time since the Thomas Fire of December, 2017 and the deadly debris flow of Jan. 9, 2018 in Montecito, the chaparral in the burn area is bursting back to life. According to the leaders of a Los Padres National Forest team that is monitoring the burn scar, this winter’s rains – not too heavy or close together – have been ideal for greening up the blackened mountainside.

“We’re not there yet this winter,” said Kevin Cooper, a biologist who leads the team with Jonathan “Yonni” Schwartz, a Los Padres geologist. “It’s still early in the growing season. But the grass and brush is re-sprouting and it looks really good. I think we’ll see significant growth from now through August.”

So much growth, in fact, that Cooper and Schwartz are predicting that by next fall, 60 percent of the vegetation that burned up in the Thomas Fire will have recovered in the mountains above Montecito and Carpinteria, on average. And at 60 percent of vegetative recovery after a fire, studies show that the risk of a debris flow or a debris-laden flood drops significantly, the scientists say.

“We’re looking for that break,” Cooper said. “We’re still in a lot of risk this year, and there still will be risk next year – but it will be greatly reduced.” 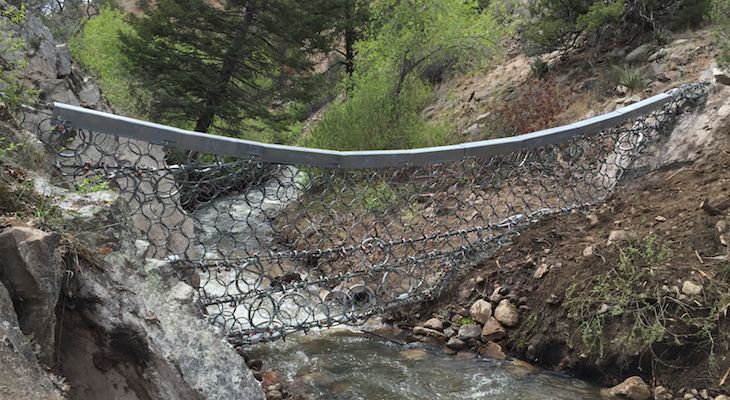 The ring nets planned for Montecito creeks will resemble this one spanning a stream at Nambé Pueblo, New Mexico. Photo courtesy of KANE GeoTech, Inc.

If the chaparral is coming back, does Montecito need six ring nets that the Partnership plans to install in local creeks this spring?

McElroy acknowledges that ring nets would not have stopped last year’s catastrophic debris flow, in which an estimated 2 million cubic yards of debris engulfed parts of Montecito, killing 23 people and destroying or damaging 470 structures.

“But what about a smaller debris flow?” McElroy asked. “If something happens and these are in place, we can see if they’re effective or not. If nothing happens, great. We’ll take them out. It’s an experiment. If it’s privately funded and it’s a gift, what’s the harm in that?”

Potentially, a lot, says Louis Andaloro, vice president of the Urban Creeks Council, the only environmental group publicly opposing the ring net project. Andaloro has argued that even a small debris flow could rip out or plug up the nets, causing the creeks to jump their banks and create new channels. Manmade structures can’t adequately hold back these flows, he says, and installing nets may promote a false sense of security.

“The ring nets were this rushed, save-the community project,” Andaloro said. “But they’re a little late. We’ve had two winters. I don’t see this as being an imminent emergency.”

In December, the Partnership obtained a one-year, fast-track emergency permit from the county for 11 ring nets on Cold Spring, San Ysidro and Buena Vista creeks. The funds raised to date will pay for only six of them, two on each creek, McElroy said; the remaining five, all proposed for Buena Vista, will have to wait. The group can apply for another emergency permit to extend the project through 2020, but any further extensions would likely require public hearings and full environmental review. 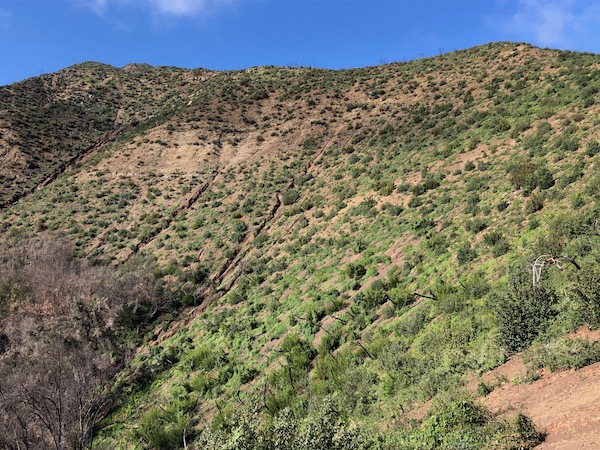 By next fall, 60 percent of the vegetation in the burn area above Montecito and Carpinteria will have recovered, significantly lessening the risk of debris flows, scientists say. Here, manzanita, ceanothus and chamise are coming back along the ridgelines above San Ysidro Creek (Photo by Kevin Cooper)

“I’m so grateful that we got this far,” McElroy said. “Nobody thought we were going to get here. If the impact of a debris flow is lessened even a little bit, it’s worth it.”

To date, three hundred people have donated to the Partnership; they are listed on the group’s website. Several co-founders, including Joe Cole, a part owner of the Independent, together gave between $200,000 and $300,000, McElroy said.

The $5.4 million cost of the first six nets includes a $1 million bond covering maintenance, removal of debris, and removal of the nets themselves. The Partnership needs to raise $1 million more toward that project, plus an additional $1.6 million for the four nets on Los Padres land, McElroy said.

(There are no debris basins on Buena Vista Creek; the county has applied for $3 million in Federal Emergency Management Agency funds to construct one on Park Lane. The county’s share of the project would be an additional $1 million.)

When debris is trapped in a ring net, it will be removed with a backhoe and placed immediately downstream where, as Cooper and Schwartz have noted, it could become a problem again someday. “It’s debris that’s in the channel that’s movable,” Cooper said. Schwartz said: “You really need to dispose of it somewhere else.”

But trucking away the debris, as the county does, is not an option, McElroy said; the nets will be in remote locations above Mountain Drive with no access roads.

“If you look at this as a fire and flood cycle, I’m a believer that we are in a new era,” he said. “Are we going to keep doing what we’re doing, or do we need to look for innovative new solutions?” 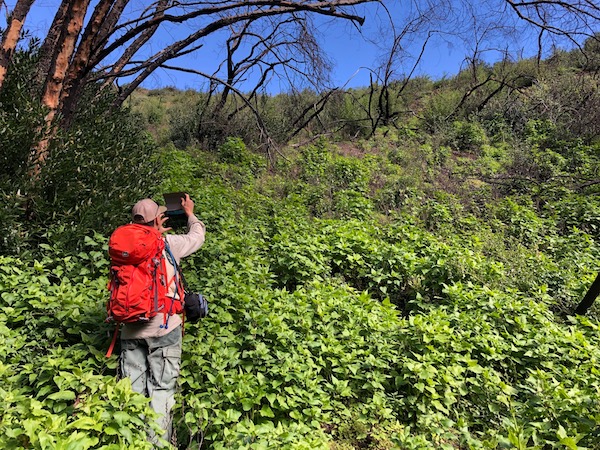 Jonathan “Yonni” Schwartz, coordinator of the Los Padres Burn Area Emergency Response team, documents the thick carpet of vegetation spreading across slopes near San Ysidro Creek that were denuded in the Thomas Fire. At left, a bay tree has re-sprouted (Photo by Kevin Cooper)

Scientists say that it can take five to seven years for the vegetation in a burn scar to fully recover. On the heels of the Coyote Fire in 1964, a debris flow roared down San Ysidro Creek, destroying homes near East Valley Road. Five years later, during the winter of 1969, some of the same homes were hit by a massive debris-laden flood. That year, 58 inches of rain fell at Gibraltar Dam.

Chaparral holds soil in place, slows down water running across the surface and allows rain to soak into the ground. Grasses and shrubs help dissipate the energy of raindrops falling onto the surface, and they provide shade that keeps the soil moist and cool.

“The vegetation is a key component to putting this country back to where it was before the fire,” Cooper said.

To document the extent of the regrowth above Montecito, Cooper and Schwartz periodically bushwhack their way down from East Camino Cielo, scrambling around cliffs and waterfalls as they go. On a recent trip to Cold Spring Canyon, they spotted a patch of chaparral six feet high that had somehow escaped the Thomas Fire. Schwartz crawled under some branches and found everything intact: topsoil, roots, leaf litter and pieces of bark rotting in the dirt.

“There wasn’t any erosion at all,” he said. “It’s as if nothing happened there, despite the exact same rainfall. It’s proof of how important this vegetation cover is.”

Based on their most recent observations, the scientists estimate that in the lower watersheds, nearer the urban areas of Montecito and Carpinteria, 60 percent of the chaparral that was there before the Thomas Fire has already grown back, while in the upper watershed, nearer the ridgeline, the regrowth is presently at about 35 percent. With the rains and the advent of warmer weather, they say, the mountainside will look very green through June. Grasses and wildflowers will dry up over the summer, but they will still provide protection for the soil.

At the same time, Cooper and Schwartz caution that the rainy season is not over. There’s a lot of soil and rocky material sitting loosely on the steep slopes, and storms such as the one on March 5th can still pack a powerful punch.

“The last thing we want to do is give people a false sense of security,” Schwartz said. “At least for the remainder of this winter, there is still a very high level of threat out there.” 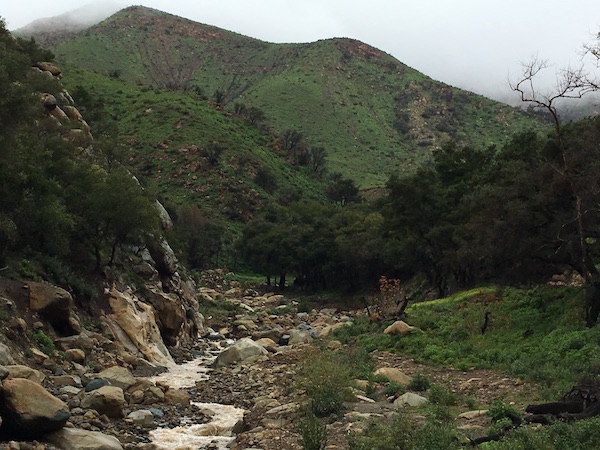 A wet winter is greening the charred slopes above San Ysidro Creek in Montecito. Scientists predict that 60 percent of the chaparral will have recovered to the ridgeline by next fall, significantly lessening the risk of a debris flow in 2020 (Photo by Melinda Burns)

Toggle Comments (Show)
Outcomes of a Wet Winter
A really good idea, the people of Montecito donated their money to a useful cause. (One that could save lives and property).
Outcomes of a Wet Winter
The issue will be the maintenance & repair of nets- repeatedly we see good intentions not continue to receive the necessary service. What was the debris basin maintenance history prior to the Thomas Fire not a week before the 1/9/18 rain but the past 10 years?
Outcomes of a Wet Winter
A really bad idea, and they could donate that money to something useful rather than something harmful. (And I don't mean illegal payoffs to get their kids into good colleges.)
Outcomes of a Wet Winter
Protecting people who choose to live in an unsafe area. These barriers are ugly, and can animals use the streams that have barriers? Having said all that, I hope they work, and I hope everyone is safe because of them.
Outcomes of a Wet Winter
If there aren't any access roads to remove the debris trapped by the nets, then how do they get a backhoe in there to clean them and move the trapped debris downstream of the nets? That seems like a huge environmental impact. Normally removing and placing fill in a creek likethat would require an Army Corps of Engineers Permit and they would be very reluctant to let anyone do this. Best case scenario for everyone is that the nets are never required and in a few years they take them out.
Outcomes of a Wet Winter
I'd like to place my bet on the Law of Unintended Consequences. A low population-density area like Montecito is probably a good place to experiment with such an unproven "good idea."
Outcomes of a Wet Winter
Nice to see someone like Pat McElroy spearheading a project like this. His leadership and vision is an asset to the community. It's all about protecting people. Glad to see that the Partnership for Resilient Communities is doing just that.
Please Login or Register to comment on this.

Problem is, Salud flies in a