Both the International Space Station and the Chinese space station, Tiangong, will be making visible passes through Santa Barbara’s evening skies to say goodbye to 2022, weather permitting. Their orbits may change, and I've only listed the best and brightest events, so to get the latest and most complete predictions, visit Heavens Above.

On Saturday, December 3, the ISS will rise in the NNW at 6:11 PM PST, for a brief, low pass over our mountains, fading out just after passing below Polaris in the N at 6:13 PM.

We'll get two passes on Sunday. The first will be a low skim from N to ENE between 5:23 PM and 5:26 PM, from below bright yellowish Capella to vanish in the Earth's shadow by bright red Mars. It will make a brief pop-up on its next orbit at 6:58 PM, rising in the NW and climbing toward bright Vega, but fading away before reaching it.

Monday's pass will be the brightest, starting at 6:10 PM in the NW, from Draco through Cepheus, Cassiopeia, and Andromeda, and then disappearing above the waxing gibbous Moon at 6:13 PM in the E.

There will again be two passes on Tuesday, starting with a bright one at 5:21 PM in the NNW, going below Polaris, across dim Camelopardalis, then through Perseus and above the Moon into Taurus, setting in the ESE at 5:27 PM. The station will return for a low ocean pass from the W to the SW from 6:58 PM to 7:01 PM, fading away below Saturn in Capricornus, the Great Bikini Bottom in the sky.

Lots of good sky stuff on Wednesday for Pearl Harbor Day. First up will be the Chinese space station, Tiangong, rising at 5:59 PM in the NW in Hercules, going through the bowl of the Little Dipper, and fading out in dim Camelopardalis in the NNE at 6:02 PM. Then, at 6:09 PM, the ISS will rise in the WNW in Hercules, fly below bright Altair, above Saturn, by Fomalhaut, and set in Sculptor in the SSE at 6:15 PM. At about 6:30 PM, we'll get a spectacular occultation of bright Mars by the Full Moon, with Mars popping back out from behind the Moon at about 7:30 PM. Mars is normally so small it's disappointing to look at in all but very large telescopes under perfect sky conditions, but it is currently close enough that it will show some surface features, like the polar ice caps, in backyard telescopes. If you've got one, drag it out and watch the occultation. 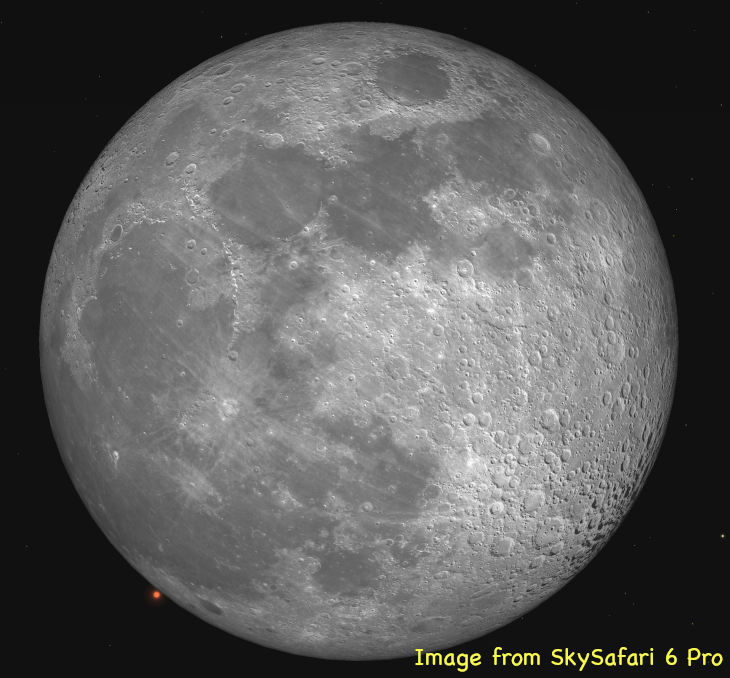 Thursday's high and bright ISS pass will begin at 5:20 PM in the NW, from Hercules to Sadr at the heart of Cygnus to Pegasus, then very close to brilliant Jupiter and into Cetus, ending in the SE at 5:26 PM. With binoculars, you should be able to spot the four Galilean Moons of Jupiter, now up to 80 known moons. Callisto and Io will be to the east, and Ganymede and Europa to the west of Jupiter.

On Friday, December 9, Tiangong will appear at 5:39 PM in the NW, and go through Hercules, above the bowl of the Little Dipper, and into the Hyades, the V-shaped cluster forming the face of Taurus, disappearing at 5:44 PM in the NNE. Then at 6:09 PM, the ISS will skim low over our ocean horizon from Hercules in the WSW to Grus, the Crane in the SSW, ending at 6:11 PM.

The last ISS pass of this sequence will rise on Saturday at 5:19 PM in the WNW, with a slightly higher and longer version of its Thursday pass, setting at 5:24 PM in the S. Can you spot very bright Venus very low on the WSW horizon? The ISS will then transition to predawn passes to end the year. Tiangong will appear at 6:17 PM in the WNW and travel from Hercules to Albireo in the beak of Cygnus, the neck of Pegasus, and above Jupiter to disappear in the SE at 6:21 PM.

The brightest Tiangong pass will be on Sunday, December 11, starting at 5:18 PM in the WNW, and going overhead from Hercules to Draco to Cepheus to Andromeda to Aries to Cetus, ending at 5:25 PM in the ESE.

Celebrate the official beginning of Winter for the Northern Hemisphere with the Solstice on Wednesday, December 21, at 1:48 PM.

Thanks so much for the information on all these exciting coming events !
Beats watching TV !

"Sac, no one is pushing back