The 10,000 square-foot area is located behind the theatre at 1214 State Street and next to the parking garage on Victoria and Anacapa Streets.

Plaza Granada is described to be a "landscaped, well-lit space providing safe access to patrons, a limited number of parking spaces, and improved parking and drop-off facility for the backstage of the theater" replacing the current "crowded, unattractive area where cars, buses, and trucks share space with a constant flow of pedestrians," according to the Granada Theatre.

The $2 million project will be paid through fundraising and is expected to be completed by June. 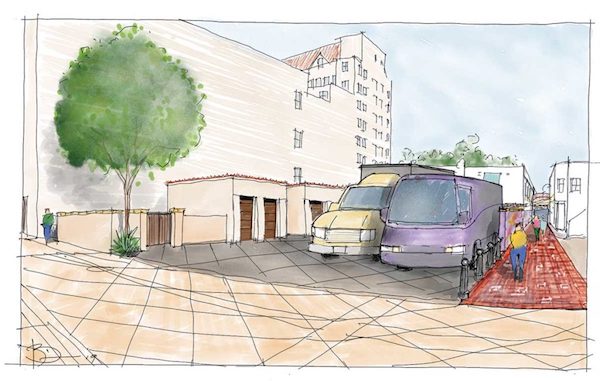 A rendering of the plaza will include parking spaces and drop-off facility for the backstage of the theater. (Photo: The Cearnal Collective)

One tree in the drawing with a plant at its base in the parking area and what appears to be two plants in the front area. I know there's limited space, but is this the extent of the "landscaping?"

Looks like a nice new alley for the bums to hang out.

I didn’t want to be the first one to mention that. They need a plan to keep it from becoming a bum hangout. I don’t see any plans for benches, which might help somewhat.

It's a sad commentary that we were all thinking exactly the same thing: A new place for bums to hang out.

2 million for that? nice waste of tax dollars (again) SB! Do we REALLY need this right now? No. I've been uptown several times last few weekends and....it's a ghost town from Vic to Carrillo. So why blow this money on something that is NOT needed right now and frankly wasn't needed to begin with. I really ....really REALLY hate the current city council and mayor...just awful

The article says it will be paid by fundraising (paragraph 5, just above the drawing).

Too bad that people who have $2 million to give away won't donate it to something of value (and where they'd get a tax deduction --- or is this, providing resting and sleeping space for homeless, tax deductible?

Who will vet the mural? Since it's public art it should go before the arts advisory, unless of course it will follow the path of the murals at Ortega Park?

I could not agree more! This council is the most USELESS, and WORTHLESS Council EVER!!!!!

It isn't tax dollars. This is private owners on private property. And landscaping is limited because the owners still need to provide for commercial parking and residential parking for the two condos on the top of the Granada.

It literally says it will be paid for through fundraising. learn to read before getting outraged!

Glad to see lighting improved, and hopeful it will be safer to walk through at night. Pretty skanky place.

You must have a very low threshold for skanky.

Can't disagree with other commenters at all. This makes no sense.

Not a fan,,, unless we make the whole area a flooded water pool with running water that can be turned on and off. That would work.

Who is doing the work? Or shall I guess?

Cat of the Week: Captain Butterscotch

I took in a male street cat

More Myths about the COVID-19 Vaccine

A quote from an interview

Police Response on the Westside

Dropping off the Covid

I already know who you would