The Federal Bureau of Investigation (FBI) is continuing the search for the suspect who murdered Kym Morgan in Santa Barbara in 1985.

On the 35th anniversary of Morgan's disappearance, the FBI Most Wanted Twitter page posted an alert seeking information with a $25,000 reward for this unsolved murder.

"Kym Morgan disappeared from Santa Barbara, CA, on April 28, 1985. Four days later, her partial remains were found along the side of East Camino Cielo Road in the Los Padres National Forest. The #FBI is offering a $25,000 reward for info about her murder," the post read. 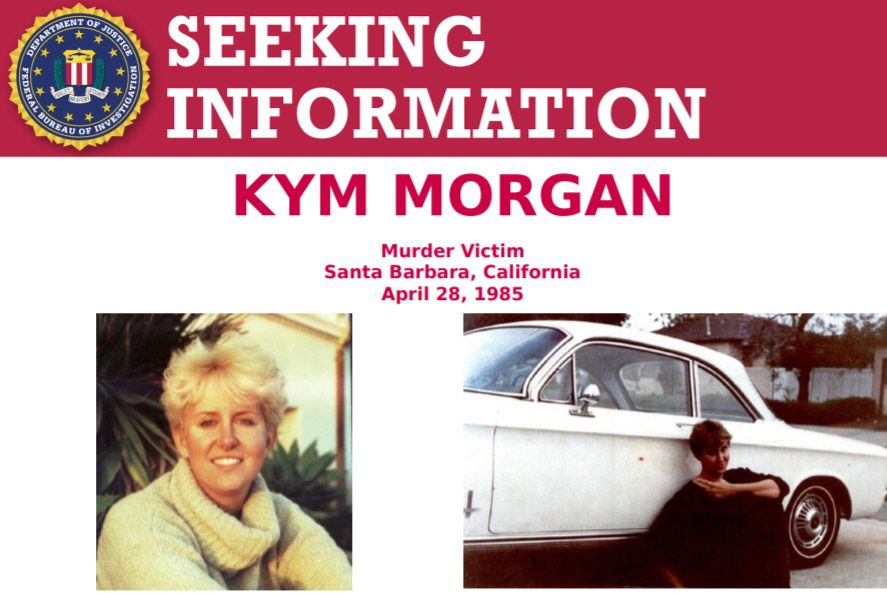 Morgan was a photography student at the Brooks Institute with blonde hair and green eyes, standing 6-feet tall. She was just a month shy of her 25th birthday.

She was reported missing the next day, April 29, 1985, after she had not returned and her roommate and landlord found Morgan's vehicle, 1962 white Chevy Corvair, abandoned and unlocked in the lumber store parking lot.

Four days later, Morgan's partial remains were found strewn along the side of East Camino Cielo Road in the Los Padres National Forest above Santa Barbara. Her thighs had been placed alongside each other in a culvert. Her torso, right arm, and lower left leg are still missing.

The week after they found the remains of this woman my Grandma was at a fast food restaurant eating in her car when a man tried to get into it. He first tried to open the passenger car door but found it locked. He then ran around to her door and she locked it just before he could get to the door latch. She never reported it. I always wondered if it was the man who killed this woman. Wish to this day she would have said something to the police. Someone who tried this was too dangerous to be on the streets. I hope they catch whoever did this.

Where exactly on East Camino Cielo did they find remains? Near 154? Near Gibraltar? Not sure why that information was never released.

Always nice to know there are additional investigators on a case but does anyone know why the FBI is involved in this State crime.

@TheYellowTape, I remember that too but the m.o. doesn't align with the Original Night Stalker (aka Golden State Killer). He was in this area but he was more into stalking, rape and eventually murder and had a few victims in the area. Dahmer was into dismembering but his victims were male. Zodiac was into taunting police and wasn't into dismembering. Chances are, whoever did this crime has done it before.

As I understand it, given the nature of the crime, the timing, and various other elements, there was some speculation that there may be a link to the Original Night Stalker or the Zodiac.

I moved here in May of 85 from San Diego. I remember this horrible thing so well. Everyone was terrified. Have always hoped they'd solve this case. Glad to hear they are still trying.

She was a nice young women that was a scary time in our history...

Wow, that is so tragic. Even more tragic, it looks like from this website (viewer discretion advised: https://murderincorp.wordpress.com/2019/10/11/kym-morgan/ ) that she was also brutally attacked in 1981 leaving a disco in North Hollywood, leaving her with amnesia and the need to relearn how to speak. This poor woman never had a chance at life :(

Some paid subscriber got down