Local protestors joined the nationwide movement to protest police brutality and injustice after the murders of George Floyd, Breonna Taylor, and Ahmaud Arbery.

A small group of protestors took to State Street carrying signs and candles on Friday evening. The next day, approximately 1,000 peaceful protestors gathered in Isla Vista marching from Storke Tower to Sands Beach.

The student-led protest included speakers from the "Black community who shared thoughts, frustrations and pleas for allyship, justice and safety for Black people," reports The Daily Nexus.

On Sunday afternoon, the local Black Lives Matter group organized a peaceful protest at the Santa Barbara County Courthouse with hundreds of attendees.

All of the protests centered around the recent deaths of unarmed Black citizens who were murdered by white police officers. 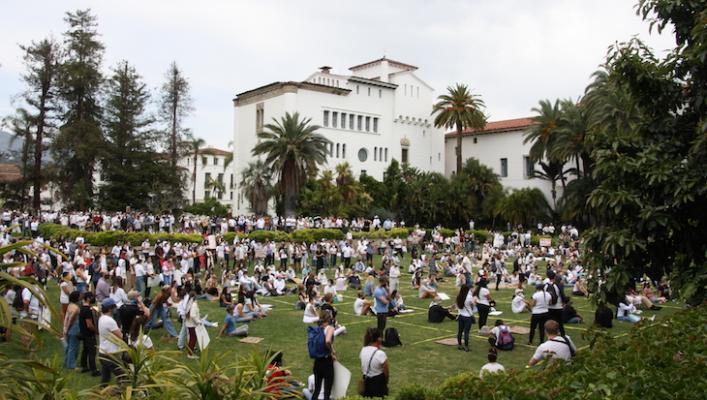 On February 23 Ahmaud Arbery, an unarmed 25-year-old Black man, was fatally shot near Brunswick, Georgia, while jogging in a neighborhood. The incident was caught on camera as two armed white men chased and confronted Arbery, ultimately killing him. One of the men was retired from the local police department.

On March 13, Breonna Taylor, a 26-year-old Black woman and Emergency Medical Technician (EMT), was fatally shot by Louisville Metro Police Department officers. George Floyd, an unarmed a 46-year-old Black man, was murdered by Minneapolis Police Officers on Thursday. The murder was caught on video as bystanders and Floyd pleaded with the officers to remove their knees from his back and neck. Floyd was later pronounced dead.

The culmination of these events led to nationwide protests against violence towards Black people and demanding justice for a history of police brutality. New York, Atlanta, Los Angeles, Cleveland, and Philadelphia are just a few major cities where large-scale protests have been taking place. Protests have even been reported throughout the world including London and Berlin.

The community of Santa Barbara responded with a peaceful protest gathering at the Santa Barbara Courthouse Sunken Gardens on Sunday afternoon.

Numerous speakers detailed their experience as black, indigenous, and Latinx people living in Santa Barbara County and beyond. Spoken-word, poems, chants, indigenous rituals, and heartfelt speeches moved the crowd to cheers and praise.

Often the leaders honored their Black elders and invited them to speak. One elder quoted Martin Luther King, Jr., "A riot is the language of the unheard" while stating, "we gather so many times in sadness, but always with hope."

Black Lives Matter ally Chelsea Lancaster gave an impassioned speech directed at the many white people in the crowd. "Too many of ya'll are too quiet for too fucking long," she said while encouraging white people to speak up at school board and city council meetings.

Ruskamp provided a detailed history of Black roots in the Santa Barbara community while stating, "I don't need you to continue to tell me Black Lives Matter as you continue to enjoy your brunch at Sambos." She referred to the restaurant on Cabrillo Boulevard that began in Santa Barbara in the 50's and expanded through the nation and has long been criticized for its racist roots.

Following the speakers, the crowd took to the streets marching from Anapamu to State to Figueroa. At the intersection of Figueroa and Anacapa Streets, the Santa Barbara Police Department hung police tape with approximately twenty officers in riot gear guarding the block where the police station is located.

Protest leaders invited members of the Black community in a powerful, peaceful demonstration as they laid on the ground for eight minutes and forty-six seconds, the approximate amount of time a white officer held his knee into the neck of George Floyd. 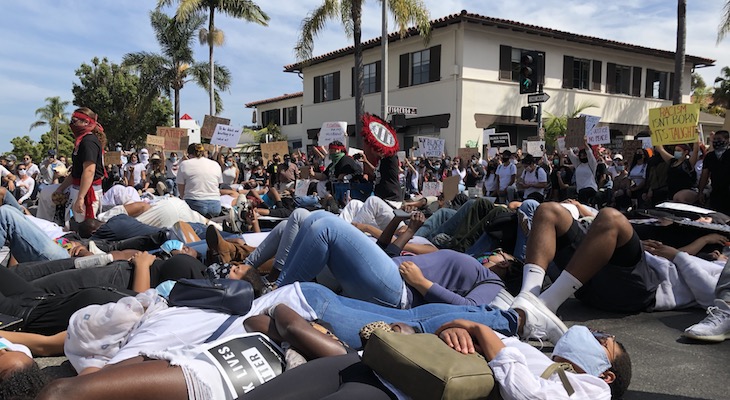 On Friday, Santa Barbara City's Police Chief Lori Luhnow issued a statement condemning the murder of Floyd and called for all police leaders to take responsibility for their departments. However, Chief Luhnow was noticeably absent from the protest and protest leaders criticized the press release as the department did not consult with Black community members to specifically address the needs of the community.

"When you talk about restorative justice, you include the people most affected," said Farmer Sieghart regarding the Chief's statement. 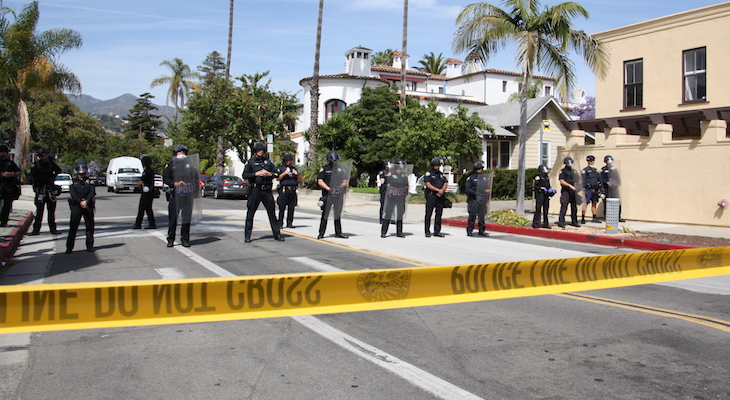 At some point, Santa Barbara Mayor Cathy Murillo appeared from behind the barricade waving at protestors.

"This is not a photo op!" one protestor yelled.

Leaders asked the mayor why she on the other side of the barricade and not marching with her constituents.

"Are you inviting me over?" asked Murillo.

A weary crowd chimed in with thoughts and feelings towards the Mayor. Tensions began to escalate slightly as someone from the back of the crowd threw an object towards the officers.

Farmer Sieghart took the reigns and quickly condemned any form of aggression or violence. She said, "we're seeing it all over the country now, white supremacists and white nationalists are hijacking Black organized movements. That will not happen here today. This was organized by beautiful Black women, and we come for change, institutional change."

Murillo listened for a short while before attempting to engage with the leaders of the protest to ask for a meeting. The leaders point-blank asked, "Where have you been? This is not new," emphasizing Murillo should have already spoken up and reached out.

Murillo continued to talk over Farmer Sieghart who retorted, "when a Black woman is speaking, you're silent." Murillo responded by taking off her mask saying, "when the mayor is speaking, you have to listen to me too." Shortly thereafter Murillo relinquished and walked away from the discussion as the crowd booed. (A video of this interaction can be viewed here.)

At the conclusion of the event, the leaders thanked the crowd of all backgrounds and colors for supporting the cause and movement and encouraged everyone to continue fighting for equality. The crowd slowly dispersed while chanting "No Justice, No Peace."

The local Black Lives Matter chapter published their demands to their Facebook Page asking for the protection and preservation of Black landmarks, transparency and accountability from local law enforcement, recognition of the Juneteenth commemorating the Emancipation Proclamation, and that the City Council adopts a resolution condemning police brutality and declares racism a public health emergency.

Not long after the event, Murillo also released a public statement on the death of George Floyd.

"Most of us can never assume to know what it’s like to walk in the shoes of Black America – members of the marginalized community are rightfully scared and angry with a range of emotions. As a Latina, I share a glimpse of the disenfranchisement commonly experienced by people of color," said Murillo. The full statement can be read here. 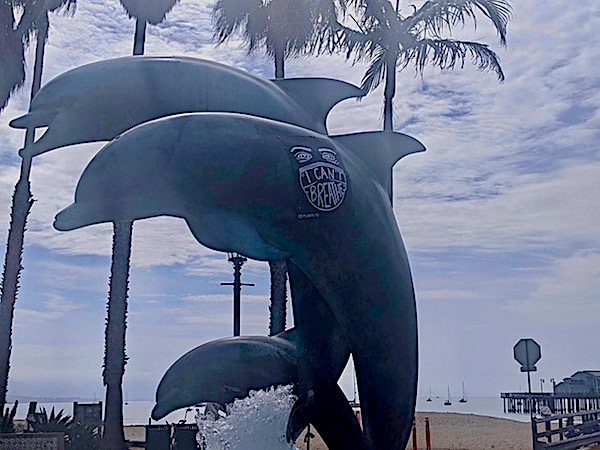 That face says, “I really

So for various reasons,

Interesting how the Ayn Rand

I didn't realize they had

Great news – and it seems

Thank you for the thoughtful

Another unhappy guy in a wife