A student pilot from Burbank was in his third solo-flight when the plane descended like a corkscrew and crashed near Orcutt last week.

The airplane caught fire after crashing into the basketball courts of Ralph Dunlap Elementary School. The pilot, 38-year-old Tigran Garabedyan, was killed instantly. The school has been closed to the COVID-19 pandemic and children were not present.

The National Transportation Safety Board (NTSB) recently released its preliminary report of the fatal accident stating on May 20, around 10:43 a.m., the Cirrus SR20 airplane was operating as a Title 14 Code of Federal Regulations Part 91 solo cross country flight.

A witness reported that the airplane was flying lower than normal and it appeared to oscillate, followed by an engine power increased, and then the airplane straightened out. Shortly thereafter, the power decreased, and it started to oscillate as it went out of view. Another witness observed the airplane with its wings perpendicular to the ground as it descended out of view. And a third witness said his attention was drawn to the airplane when he heard a "loud hissing sound," which sounded like a "large bottle rocket." He looked up and saw the airplane abruptly turn left and descend like a corkscrew, according to the report.

Garabedyan's flight instructor reported that he has been in flight training since September 2019, and had accumulated about 50 flight hours. The accident flight was the his third solo flight, and second cross country. They had flown the same route as the accident flight at least twice together, and Garabedyan flew it once on his own about one week prior to the accident.

Garabedyan practiced as an emergency medicine physician in Southern California and was known as a humanitarian and entrepreneur, according to his obituary.

"Your legacy will live on for eternity, the whole world will remember a hero, an exceptional doctor, an ideal son, an amazing brother, a perfect family man, a loving husband, a loyal friend and most of all, the world's greatest dad, that has ever graced this Earth," his wife Sonia wrote.

The NTSB reports the airplane has been recovered to a secure location for further examination. 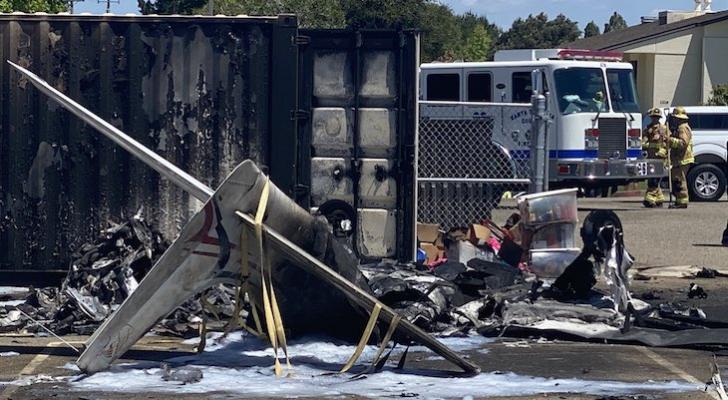 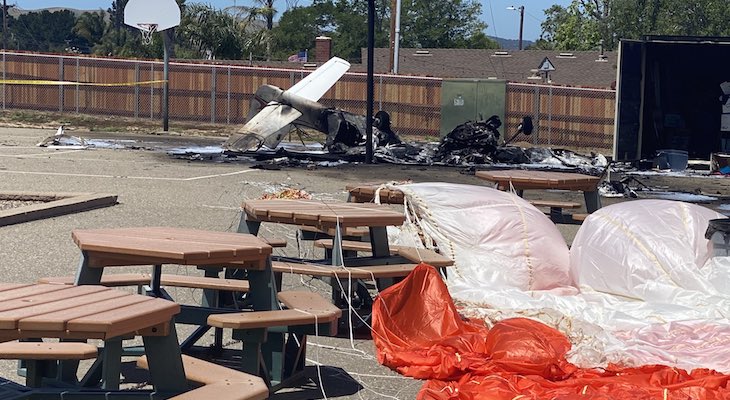 I wonder if there is any relation to the Santa Maria Deputy Defense Attorney?

I have flown in a similar plane. The pilot instructed us on the use of the parachute should he become disabled etc. There is a large handle in the roof of the plane that you pull to deploy the chute. It is not foolproof. The plane cannot be going too fast nor be too low to the ground. It will enable the whole place to safely float down under the right conditions. I have seen some video of the crash captured by a security camera. The pilot was too low when the chute was deployed. Perhaps he was hoping to land on the school grounds and avoid the residential areas and thus delayed pulling the handle. The Cirrus is not a hard plane to fly for a beginner.

Thank you for the information.
Regarding a comment below, accidents happen, wait for the NTSB report. Every pilot must do their solo hours; there's hundreds or thousands doing so every year.

Did he try to eject? Is that a parachute?

That plane doesn't have an ejection seat. It has a parachute that's meant to bring the plane down soft enough to live. The noise in the video is the rocket that deploys the chute.

I did read somewhere that he did attempt to eject but was already too low to the ground. A terrible tragedy. My family and I extend heartfelt condolences to this man's loved ones and to all else who knew and loved him.

Very sad for his family. I think the accident was primarily attributed to an inexperience student pilot with only 50 hours flying an advanced aircraft (Cirrus SR20) that he had very few hours in and was much more technical to fly than your standard student pilot aircraft (Cessna 152 or 172).

This is so sad! What a beautiful obituary from his wife. It looks like his loss will be deeply felt by many, including the community where he helped save lives.