The Western Redbud is a California native tree with a big wow factor!  For several weeks in the spring, it produces a dazzling display of magenta-pink flowers that immediately catches the eye.  Despite its relatively small stature (6- to 15-feet tall), it makes a large splash of color.

It is a drought-resistant form of the closely related Eastern Redbud, with many of the same desirable family attributes.  (The Eastern Redbud was Tree-of-the Month in March 2022.)  The Western Redbud differs from its eastern cousin by being smaller, having somewhat larger and more reddish flowers, bearing larger seed pods, and carrying a denser and more rounded crown.

While the Western Redbud has attractive features in all seasons, its spring flowers are its glory.  In March and April, clusters of lustrous magenta-pink flowers seem to magically appear on its bare, shiny-brown, branches.  Flowers can even occur sporadically into early summer, well after the leaves have emerged. The flowers are shaped like pea blossoms, are tiny (½ inch wide), are “perfect” (meaning they each have both male and female reproductive parts), and hug the branches or hang on short racemes in clusters of varying numbers.  Sweet nectar is produced deep in the throats of these little flowers; only long-tongued bees, such as carpenter bees and bumble bees, can drink there.  Hummingbirds and butterflies also find the nectar delicious.  All of these serve as pollinators.

Redbuds are in the Legume family (Fabaceae); consequently, their pollinated flowers create seed pods (up to 4-inches long and ½ inch wide) that look much like common snap peas, each pod containing 10 to 12 brown seeds (¼-inch long).  In autumn, after the spent leaves have fallen, these maroon-brown seed pods continue to hang decoratively from the branches.  During the winter months, the tree shows a lovely sculptural silhouette. 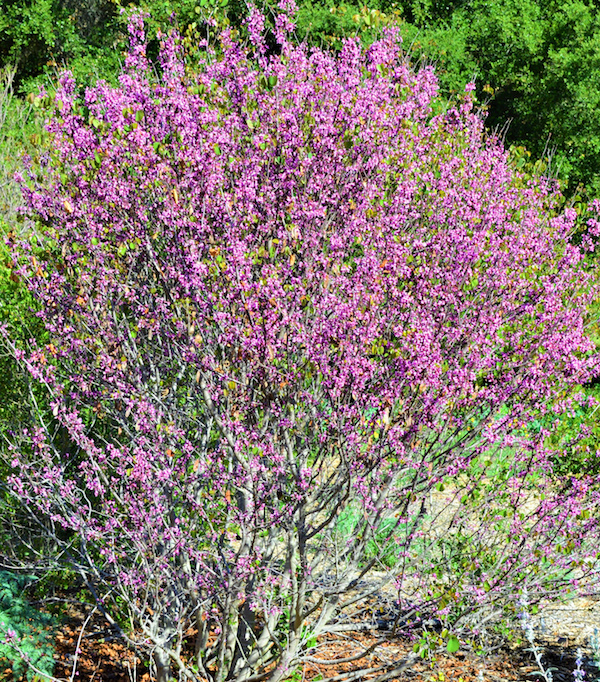 The leaves have their own distinct beauty.  They are 3-inch-long and are normally heart-shaped with a rounded tip.  Occasionally, they are notched on the tip and slightly folded upwards - creating a charming vision of opened butterfly wings.  New leaves emerge a glossy bronze in color;  as they mature, this changes to light green and then to a satiny darker green.  In the fall in colder locations, they will turn a vibrant yellow and red.

The Western Redbud’s native range spreads from California’s Sierra Nevada foothills to the coastal ranges of Northern California and down into San Diego County, with small populations also in Southern Utah and Northern Arizona below 4,000 feet.  It is found in foothill woodland and chaparral plant communities, on dry hillsides in arroyos and canyons, usually near sources of water.  These locations normally provide higher rates of seasonal rainfall and colder winter temperatures than in the Santa Barbara area.  Established trees are cold hardy down to 10 degrees F.

This tree is perfectly suited for our Mediterranean climate.  Even though it is admirably adapted to survive in drought conditions, it certainly will thrive with garden irrigation - and will look better with a little extra water.  It can grow in full sun or partial shade.  The best flowering occurs in areas with cold airflow, such as in canyons and near creeks.  While it prefers well-drained soils, it will adapt to most soil conditions, including clays.  It is relatively maintenance-free.  Remarkably, it is highly resistant to oak root fungus (Armillaria), which is such a stubborn problem in all our local soils.

It naturally grows as a large shrub or low-branched tree;  however, given judicious pruning early in its life, it can be trained into a single- or multiple-trunked tree.  It can be propagated easily from seed or cuttings.  When grown from seed, it can be highly variable in its volume and color of blooms.  In rare instances, a white-flowered variety will be found growing naturally in the wild;  a white-flowered cultivar, ‘Alba’, is sometimes commercially available.

The botanical name for Western Redbud is Cercis occidentalis.  The genus name, Cercis, comes from the Greek word, “kerkis”, meaning "weaver's shuttle", referring to the shape of its seed pods.  The specific epithet, occidentalis, refers to the word, “occidental”, meaning a native of the west. 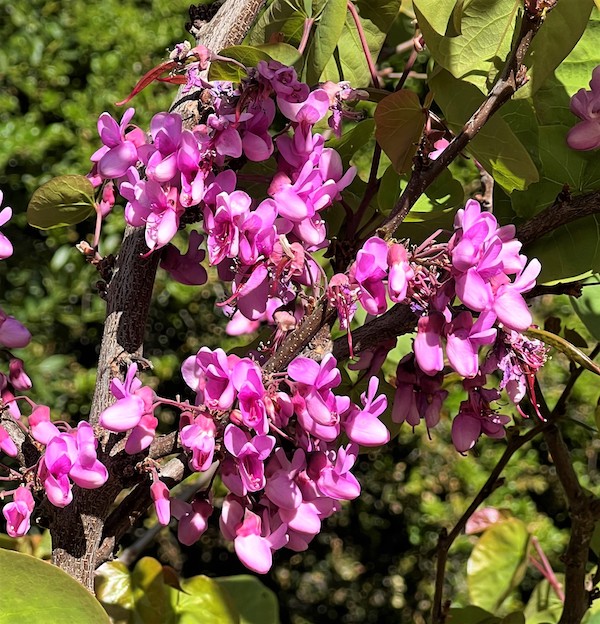 The Western Redbud has a wide range of uses in the garden.  It is an absolute must for a California native garden.  Its smaller size makes it perfect for areas with limited space - as it can be an excellent patio tree, a lovely small garden accent, or a fine specimen in a decorative pot.  Planted in a line, it can be an attractive screen.  In a mass planting, it can make a dramatic statement and can stabilize slopes.

Western Redbud can be seen at Alice Keck Park Memorial Garden, at the Santa Barbara Botanic Garden, and in many local private gardens.  Given its fine qualities, it is a native tree that really should be planted more frequently in our landscapes.

Tree-of-the-Month articles are sponsored by Santa Barbara Beautiful, whose many missions include the increase of public awareness and appreciation of Santa Barbara’s outstanding trees and, in a long-time partnership with the City Parks & Recreation Department, the funding and planting of trees along the City’s streets.

There is a western redbud tree on the north side of Kentia Street. Every year, we love passing by it when it is in bloom.

These are always such a delight, when traveling across the state to suddenly see a magical splotch of magenta pink on a forested hillside.

Favorite video of a hunter

When your texting and driving

speed limit there is what, 25