Mr. Staab made an unsafe turning movement when his Ford partially occupied the #1 lane of US 101 southbound, traveling directly in front of a Toyota Tundra.  Mr. Buist tried to avoid a collision by turning his vehicle to the right.  The front of the Toyota collided into the passenger side of the Ford between the #1 and #2 lanes of US 101 southbound.  The vehicles came to rest approximately 20 feet off the roadway on the right shoulder of US 101 southbound. The California Highway Patrol (CHP), Santa Barbara County Fire Department, and American Medical Response ambulance company (AMR), responded to the collision scene. As a result of the collision, multiple parties were transported to Santa Barbara Cottage Hospital, via AMR  ambulance due to major to minor injuries.

One of the passengers succumbed to her injuries and was pronounced deceased five days later at Santa Barbara Cottage Hospital.  The collision remains under investigation at this time.  Alcohol or drugs were not a factor in this collision.  Victim information will be releasable through the Santa Barbara County Coroner's office after next of kin have been notified.

Santa Barbara County firefighters responded to the scene west of Goleta at 1:47 p.m. According to the California Highway Patrol (CHP), a white Ford F350 truck was making a left turn at an intersection when it was struck by a Toyota Tundra heading southbound on Highway 101. Both vehicles ended off the roadway in a ditch.

All victims of unknown ages were taken by three ambulances to Santa Barbara Cottage Hospital.

CHP is investigating the cause of this accident. 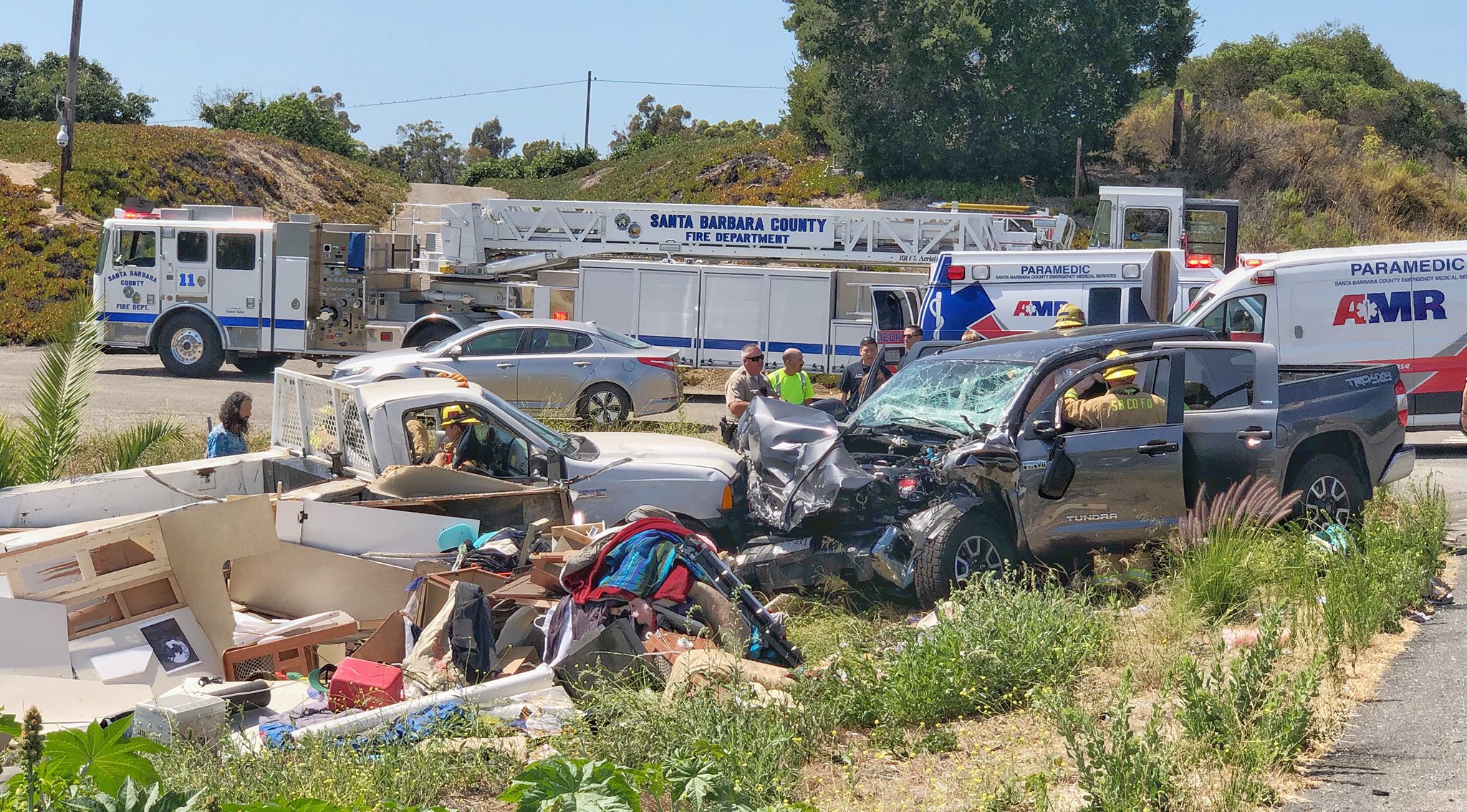 The driver should have to pay the now single father child support until the baby is 18 for killing his mother.

Actually I think the total the family is owed is the estimate of lost wages and earnings due to her early death. It is going to be a lot more than child support, especially when added to their medical bills.

“Garrett Staab, who goes by his artistic alias Awethentic RAwesum AweNasty” - from an article about the offending driver, Mr. Staab. Sounds and looks like an awesome, responsible person.

I'm thrilled to see what looks like a good business. The dead woman's son will benefit. Thanks.

Gotta be illegal to make a U-turn at this location, right? That is only a left turn location. No way to maintain the minimum 45 mph speed while doing the U-turn. This seems like a good case to charge the perp with manslaughter. I know a nurse that cared for the family in Cottage ICU and she was very much affected by what had happened to this family.

TAGDES - I never blamed anyone, and I have no friends here. You nor I know the exact bumper to bumper turning circle of that truck, and you assume Joe Shmuck is going to hug the exit lane and immediately hit full lock before turning to justify it being a perfectly manageable U-turn scenario. Both assumptions are assinine considering the he would have to know ahead of time to hug the outside lane edge and the fact that he would have to be stopped before turning to full lock before starting the turn in order to achieve that minimum turning circle. It's a stupid place, and a stupid idea, to make a U-turn there. It's not a perfectly fine place to comfortably make a U-turn. Everyone and their mom knows he failed to yield the right of way.

Mattyboy....Thanks for proving that I was correct....your numbers, 46.5' clearance, regular cab 350 turning circle 46.1' giving him a full 1/3 of a foot clearance. Look at the photo, impact shows he encroached well over 4' into the No 1 lane as even trying to turn to the right the Toyota impacted the passenger door on the 350. This is not F 1 so the apex has no bearing here. You're correct about not 20' between the lanes, carry the tangents along the edge stripe to X-over point and it's actually more like 24' + 11' +lane N-bnd and 11' +lane S-bnd and bingo there's the 46'5 we both agree on. Attitude is only curiosity about how you and your buddy PitMix believe that every accident is the fault of Caltrans or lack of CHP presence. He failed to yield the ROW...end of story.

TAGDES - You are the one who can't read a map, or aren't looking at the Las Varas Canyon Road crossing. From google maps it's 46.5' from outside exit lane (nearest NB #1 lane while still inside the line) to outside entrance lane (nearest SB #1 lane while still inside the line) based on the measure distance tool, zoomed in as close as possible. There is NOT 20' between the opposing exit/entrance lanes, there is hardly 4' at the apex between the two. A 2007 F350 has a turning radius of 23.05 to 29.25′ (different length wheelbases depending on truck options). That's a turning CIRCLE of 46.1 to 58.5', and the driver may not have been full lock the whole time nor hugging the outside of the exit lane when starting the turn. Guess what? A 58.5' circle doesn't fit between the outermost lane lines, and a 46.1' circle just barely fits assuming full lock, and assuming these numbers are from outside bumper and not curb to curb wheel clearance, in which case the bumper would have a noticeably larger turning circle, easily encroaching on the #1 SB lane. Not sure what your problem is or where the attitude is coming from.

I suggest you look at the map. There is a scale at the lower right and since you obviously don't know how to read it just look at the lanes which are 11' +or-. That gives you 40' within which do make a U-turn. There is 20' between the northbound left turn and the southbound acceleration lane they don't even come close to intersecting. Do you realize that the truck was headed northbound.

Yeah I looked at the aerial and it looks like only a small car could make that U turn safely. Certainly not an F-350. By allowing U-turns Caltrans enabled this accident, given that human error is what it is. And they have the deep pockets in this case.

TAGDES - PITMIX is correct about the inability to make a U-turn there, illegal or not, and remain in the exit or entrance/merge lane. The exit lane essentially intersects the enter lane of the opposing traffic, meaning you would have to turn on a dime to stay within the lane during a U-turn. No way your average sedan, nevermind a long wheelbase truck, could make that U-turn safely.

I agree, Tagdes. I just looked at aerial imagery. So what then do you think caused this???

PITMIX have you checked a map before putting your speculation to paper? It's real easy to open another window call up Google Maps and in satellite view get a bird's eye view of the location. You will quickly see how wrong you are in your assumptions. Go ahead, check it out.

No 9:54 am, this is the open timber entrance to Las Varas Ranch on the coast. DP Ranch is east of here and Naples east of that.

I disagree that caltrans is liable even a tiny bit. It is 100% on the driver to know the limits of their vehicle's turning capacity AND to wait for traffic to be clear. The #1 lane is the fast lane, and look at the pics - the truck was not even close to completing the turn. If a location is not safe for your large vehicle to complete the turn you want, find a different location.

Tagdes, There is not enough room at that road crossing for an F-350 to make a U-turn without encroaching into the #1 lane. So that explains what happened. If U-turns are legal there, then Caltrans bears some liability for what happened. I bet if you look at Caltrans standards, this road crossing does not meet their criteria. Maybe that will help the family get some compensation for their tragedy.

Is the Las Varas location where surfers exit the 101 to park in order to walk to Naples? And there is the old gate to Naples on the other side of the freeway after the open median?

PitMix do not spread misinformation and guessing it only confuses the issue. Read my response to 10:10 am Sep 17. It is not illegal for a U-turn there. There is an over 20' safe zone in the median to wait until using the acceleration lane merging into S-bnd 101.

I knew the woman who was killed. Incredibly sad and shocking to learn about this and my heart and prayers go out to her husband, child, friends, and family. I do not know all the facts here, but when I see drivers doing stupid things, I can only think we need much better driving tests and license standards, yet, even so, sometimes Fate is the hunter. May the woman, who I won't name out of respect, rest in peace, and may her husband and son find peace as well.

SO says “alcohol or drugs” were not a factor in this collision. Google Mr. Staab. I hope a full drug test inducing THC test was done on him. How someone stone cold sober ends up causing a wreck like this is beyond me.

Look at that! Car (impact passenger cabin) design has come leaps and bounds.

At 10:10 there is a S-bnd acceleration lane for those coming out of Las Varas Cyn. The update from the CHP changes everything. They are now saying he was making a U-turn and encroached into the No. 1 S-bnd lane. If you look at it on Google satellite you can see there is room in the median for the truck to wait until it is safe to proceed that's why they don't prohibit them there. I won't speculate on why he failed to yield the ROW but the CHP stated he made an unsafe turning movement. Again not the roads problem when people make bad decisions or are impaired.

@tagdes so what do you think happened if he had a clear line of sight? How does someone cause a crash this horrific unless they’re sloshed or high?

Actually he made an unsafe u turn and cut off the other car and now the mother of his child is dead. It's horrible and sad, could have been prevented, should never even have an option to do a u turn on the freeway!

Wow, 6 people are sure drivers never make mistakes or do stupid things. First of all he was not crossing the freeway, just two lanes, was in a dedicated turn lane and had a clear line of sight with no obstructions on an over a mile tangent. I rather doubt they will be building interchanges for every side road or property any time soon.

Yikes, what a gnarly accident. It looks like one of the vehicles may have been moving cities with all the belongings scattered along the grass.

Oh man, you’re right! That poor family! Well at least they’re all still alive and it wasn’t any worse than it was

Two more patients on their way to Cottage.