In 2017, with the passage of Measure C, Santa Barbara residents chose to create a new police station to address what the Santa Barbara Police Department (SBPD) states are inadequacies at the current location and a need for special equipment necessities and everyday patrol.

All sites were reviewed based on the criteria of location, size, flood zones, re-use structures, city-ownership, and charter limitation/annexation.

The vote was 4-2 in favor of the Cota Street Commuter parking lot with councilmembers Jason Dominguez and Kristen Sneddon dissenting. Councilmember Randy Rowse abstained from the vote stating a conflict of interest due to his restaurant, Paradise Cafe, being near the site.

During the meeting the Louise Lowry Davis Center was discussed as needing a zoning change from park land and a public vote. Earl Warren Showground and the Sears building were deemed too far away from the "main call area" which would delaying police response time in emergencies, as well as both properties being privately owned and too expensive.

The Cota Street Commuter Parking Lot currently charges $70 per month for commuter Monday through Friday parking. The lot has 221 spaces and if all those spaces were full of permit purchasing commuters, an unverified estimate would equate to $15,470/month and $185,640 annually for the city.

Additionally, the parking lot is used for the downtown Farmer's Market on Saturday mornings. Farmers and supporters of the weekly market have gathered thousands of signatures to support keeping the farmer's market at its current location.

Supporters of the Farmer's Market held a rally outside City Hall on Tuesday ahead of the City Council meeting wearing shirts that read "Peas Lettuce Romaine." The first farmers’ market in Santa Barbara was held at the Santa Barbara Mission in 1979 and in 1983 Santa Barbara Certified Farmers’ Market Association was established as Non-Profit Mutual Benefit Corporation. The market's Executive Director, Sam Edelman, stated they've been in operation at Cota Street for over 35 years and average 3,000 to 5,000 visitors.

Many Farmer's Market supporters who oppose the Cota location spoke during the meeting expressing concern for farmers loss of income as well as the lot location being too small and a hasty decision. Local resident Lanny Ebenstein stated there isn't a general consensus in the community to make this decision today. "If the council moves prematurely with the Cota lot, it's going to delay everything," he said urging the Councilmembers to discuss and review other options.

Ben Sprague, the CEO of Earl Warren Showgrounds, stated the board was not notified the showgrounds were being considered as a possible location. He then reminded the Council that in 2017 the board denied the possibility of California Highway Patrol building new headquarters at their location.

Supporters of the Cota location spoke of the safety risks to police officers the longer this decision is drug out. Representatives of the Police Association League (PAL) expressed how vital this station will be to help local children. Kevin McGibben, CEO of LogicMonitor based in downtown Santa Barbara, expressed support for the new station stating how important quick response time is to crime and how it will affect the safety of his employees.

Farmer's Market Executive Director Sam Edelman stated it's been evident the Cota lot was a target from the beginning and that De La Guerra Plaza was where the city wanted to place the farmers. After his public comment Councilmember Oscar Gutierrez asked how many of his farmers are residents of the City of Santa Barbara. Edelman stated, "I don't know those demographics... maybe a dozen or so."

Gutierrez followed by stating, "That bothers me a little bit because I've asked you a couple of times already for that number. What I'm worried about is that your farmers, they're not residents of the city, they're not the ones calling 9-1-1 here, they're calling somewhere else, so there this disconnect because there's 90,000 people that live here that rely on this police force. So, I don't think it's appropriate for outside business owners to dictate how a city will support their police."

Owner of Dune Coffee Roasters/French Press, Julia Mayer, stated the reason she signed a 20-year lease for her business at the corner of Cota and Anacapa Streets was because of the symbiotic relationships with the farmers. "I'm committed to the health of downtown Santa Barbara and I want my taxes to be paid downtown," she said. While stating it's risky to move something with such roots, she ended her public comment by pointing at Gutierrez saying "and I'm a westside resident and business owner."

Local activist and Los Olivos resident, Anna Marie Gott, urged the council to look for new options and to take Cota Street and the Louise Lowry location off the list. She stated there's a desperate need for a new police station but the Cota location is very constrained and doesn't allow for growth.  She argued that due diligence was not done as it was clear that Sears location owners wanted to build housing and Earl Warren Showgrounds had no idea. 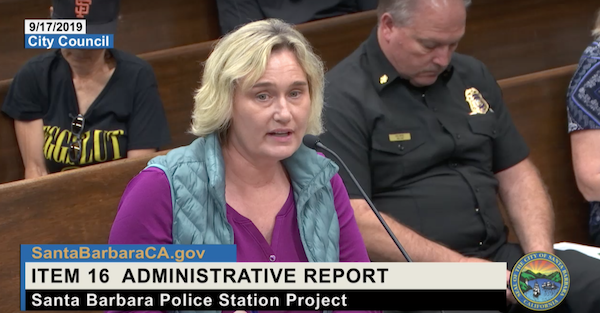 All Santa Barbara City Councilmembers agreed the current police station is inadequate and unsafe, offering support for a new station.

Councilmember Eric Friedman stated both police officers and farmers have the two toughest jobs in America today and feel there are critical issues as the current station is not seismically sound and lacks proper facilities for female officers. He supported the measure to move forward.

Councilmember Jason Dominguez proposed to eliminate the Cota location for 10-12 weeks and to look for another viable option then to come back and compare. He agreed that Cota was the obvious front runner and everyone provided evidence to make that location stick but it ultimately offers no room for growth.

Councilmember Sneddon agreed saying she changed her mind and cannot support the Cota lot at this point and wants to see it and the Louise Lowry location removed from the list.

Councilmember Oscar Gutierrez spoke passionately for the police department and challenged those opposed to the Cota location to go for a police ride-along. He then pointed out Mayer and offered for her to come door-to-door with him and chat with residents on the Westside since that's who he's speaking for.

This recommendation will now go to the Santa Barbara City Environmental Review Board. The entire meeting can be viewed here.

Are you trying to turn me on

Assumptions of a supposed man