On April 11, 2021 around 5am, Officers responded to the 200 block of Ladera Street for a report of a man brandishing a black handgun. The victim called 911, and reported a male suspect brandished a handgun at her and sexually assaulted her. The victim was able to flee prior to calling law enforcement.

Officers searched the area and located a suspect matching the description. The suspect fled into an apartment, barricading himself inside. A perimeter was established and the surrounding apartments in the complex were evacuated for public safety.

Officers on scene tried to contact the barricaded suspect with voice-to-voice attempts but were unsuccessful.  Due to the serious nature of the alleged crimes, the likelihood a firearm was involved, and the suspect barricading himself, the SWAT and the Crisis Negotiation Response Team (CNRT) were activated. Detectives also responded to the scene to assist in the investigation and obtain warrants for the suspect’s arrest. It was learned there were two other uninvolved bystanders in the apartment, one was a child.

Around 9am, police negotiators were able to convince the suspect to surrender after nearly 4 hours of negotiation. The suspect was identified as Eduardo Adrian Mendoza (DOB: 04/23/1991), a City of Santa Barbara resident. Mendoza was taken safely into custody without further incident and the other occupants in the apartment were unharmed.

Following Mendoza’s arrest, Officers and Detectives located three replica handguns inside the apartment. These imitation firearms greatly resemble actual firearms and are nearly impossible to determine as replicas based on appearance alone.

Mendoza was booked in the Santa Barbara County Jail for the following charges:

The name of the victim is being withheld due to confidentiality reasons. 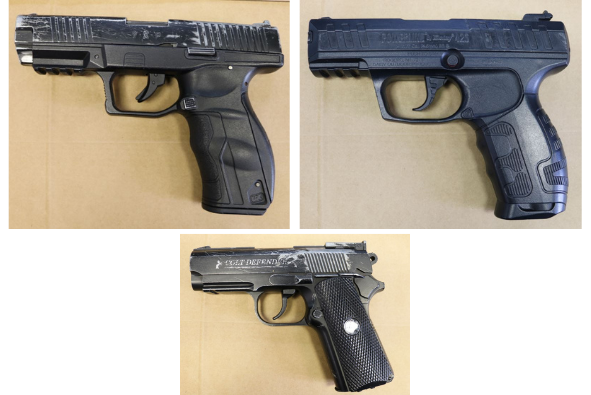 At approximately 9:10 am the barricaded suspect from 217 Ladera Street was successfully arrested. Members of the Santa Barbara Police SWAT and Crisis Negotiations Response Team Officers were able to de-escalate the incident the arrest the suspect without injury.

The shelter in place order is being lifted however law enforcement units will remain in the area to investigate the crimes. If you can avoid the area please continue to do so in order to allow officers to conduct necessary investigation.

On 4/11/21 at 05:14 am Santa Barbara Police Officers responded to a report of one male suspect who pointed a handgun at a person during a crime in the area of 200 Ladera Street.

Emergency responding officers spotted a person who matched the suspect description. The suspect, who is known to have been armed, immediately ran and barricaded himself inside an apartment at 217 Ladera Street.

For public safety, officers have evacuated the other apartment units at 217 Ladera Street and are attempting to communicate with the suspect to de-escalate and bring a safe resolution to this incident.

The Santa Barbara Police Department asks that you avoid this area until this incident has concluded. For those in neighboring homes, if you have not been evacuated please shelter in place.

Police activity in the 200 block of Ladera Street below City College.

In addition to removing deadly weapons and/or requiring licensing, training and insurance; this needs to be done for penises. Unless a penis can be used responsibly, it should be removed pending training and insurance. Penises have been raping and assaulting, leading to lifelong trauma in 1 out of 5!!!!!!! women, as well as some men and children. Penises are some of the most destructive weapons in history and present.

FORREALNEWS - How do you propose testing whether a penis can be "used responsibly?" At what age to you propose all men submit to such test?

Think the title of this should be changed to reflect the horrible assault that was attempted. Man Identified Who Held Woman at Gunpoint and Attempted to Rape Her. Sadly, language around the constant harassment and assaults of women are watered down way too much.

Can you imagine..
At one time, my family owned this entire street?!..
From city college, all the way to the brick-yard, both sides & up to the old school.
I think the buildings shown, are where my Granpa grew corn for the 6 families rancharias.
We also built the sandstone wall going up the hill there.

Where are the mug shots. For me its nice to see the face of potential criminals.

Is this the housing project that his mother lived at on the corner?

So where do you bright and shiny folks live?

a gang banger running to his MOMMY.... Pathetic.

Don't play victim here CW No one knew what the crime was until now and your right he will most likely be taken care of the rest of his life..Unless he gets done in the joint it happens sometimes...

I already know who you would run to..

I only hope that we are never on the same wave-length... Punk tried to rape someone too-What a POS. I am positive he will continue to dependent on the taxpayers the rest of his worthless life.

huh? that is just a weird statement.

Who would you run to if you were running from the police?

Code 4 All is Will..Roger Out.

Subject is Detained Older female and Child is out now clearing the apartment Sounds code 4 or close to it.

He is in the process of giving up..

Subject possibly wants to give up is inside apartment with his Mother and another child.

I did hear earlier that someone ran into the apartment in question wearing a Raiders Shirt..

Not sure what I just read but that twisted my already twisted brain a bit.

I'm hearing this might be a 417pc Brandishing incident where a subject pulled a gun on people..Also hearing there may be a "Shelter in Place" called out on the 200 Block of Ladera Street soon..

I just heard second victim not sure what happened as I did not hear the first call..

Right by the College.
And the gang and other non friendlies hang out in the wooded area by the college and behind the college apartments.

Lovely. Great element to be around out youth.

Wow Z.H. Sounds like the neighbor with the gun was not a good guy with a gun and he is one of your neighbors.

my kids and I happen to live right around the corner. What gangs and unfriendlies are you refering to? I've lived here for 15 years. There are no gang or unfriendlies. A lot of families and students. The wooded area at the base of the college behind the tennis courts, along the trail is safe as can be. i am on that trail and in the wooded area daily with my dog and kids. please don't start spouting off false information just because you have a chance to speak. you clearly do not live in the neighborhood and seem to know jack squat about it. focus on your own neighborhood. Thanks

Residents report a known gangmember spends time there as its his familes apartment. Also known to walk around with a gun in his waistband.

Thanks for the information MILLIMESA..

Units surrounding the suspect apartment which may be up for rent soon have been evacuated.

Police have been on scene acouple hours at least maybe before I got up at 5am..

Fire Department and Medic's are staged just in case someone needs medical attention.

Not sure what it's all about but there is a victim and a suspect, or suspects. The suspects are in an apartment and will not come out.