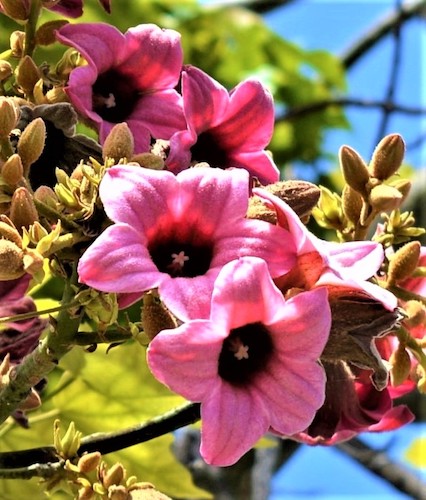 Its curious flowers (deep pink, up to 2 inches wide and long, bell-shaped, without petals but with five reflexed lobes on the calyx) occur in late spring through summer.  The flower buds, in clusters of 5 to 8, emerge directly from the branches on peduncles and are densely covered with downy, rust-colored, hairs.   Fair warning:  picking these flowers can be problematic, because their tiny hairs are irritating to the skin.  The flowers open with a deep pink color that fades to a light pink with time.

The seed pods (4- to 5-inch-long and canoe-shaped) are clothed with the same bothersome hairs.  The pods dangle from branches, individually or in groups, and sometimes form a delightful star pattern.  When mature, the pods crack open to reveal comb-like rows of encapsulated yellow seeds resembling kernels of corn.  The seeds are edible, but gloves should always be worn when harvesting them, as they are also protected by their guarding hairs. 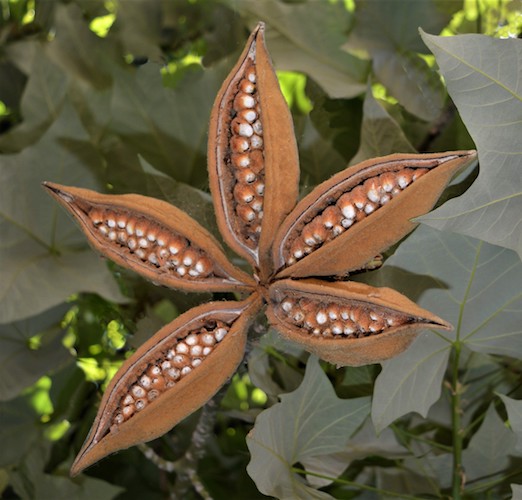 Any of the seeds is easily germinated to propagate a new tree.  It will grow slowly and, at maturity, will become a medium-sized tree (25-30 feet tall and wide).  It is drought-tolerant when established, though it prefers moist and well-drained soil when young.  It is disease resistant and essentially pest-free.  It prefers a sunny location.  It has a compact root system. All in all, it makes a good street tree or garden tree in Santa Barbara, if one discounts the irritating hairs and the litter of flowers and seed pods.

When looking at the Pink Flame Tree’s leaves alone, most people would think they come from either a sycamore or a maple.  This is because they have a similar appearance, being deeply palmately lobed, bearing 3, 5 or 7 lobes, and revealing visible veins on both sides of the leaves.  They are 4- to 8-inches in length and width.  On their top side, they are a shiny dark-green and glabrous (meaning without hairs); on their undersides, they are pale-green and a bit felt-like.  The tree is evergreen most of the year but can be briefly deciduous when flowering.  Part of the dense tree crown can be deciduous and flowering while, at the same time, another part can be only fully leafed. 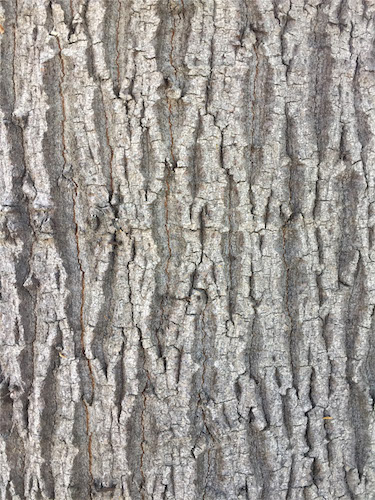 The Pink Flame Tree’s botanical name is Brachychiton discolor.  The genus name, Brachychiton, is formed from the Greek words brachys, meaning “short”, and chiton, meaning “tunic”; when joined, they refer to the shape of the seed coverings. The specific epithet, discolor, is Latin, meaning “two different colors”; this refers to the two distinct colors in the leaves and to the two changing colors of the flowers.

The Pink Flame Tree is native to the dry subtropical forests of southeastern Queensland and northeastern New South Wales in Australia.  Introduced by our pioneering horticulturists in the late 1800’s, it has found a happy home in our area, being very comfortable with our Mediterranean climate, our varied soils, and our irregular rainfall.

Very interesting . Thank you. Am interested about the environs/stories about the SB County.

I liked that species until I moved into a house on Gillespie with one in the parkway. Those seed pods dented our car roof numerous times and the city replaced the sidewalk twice in ten years due to root heaving and is about to do so again. Interesting tree, but not the best street tree, due to the problems.

Now that I know the seeds are edible, I’ll give them a try.

A number of non-native exotic trees planted by the city in tree lawns are nuisance trees. The Pepper Tree is invasive and bursts sewers & sidewalks, draws bees, exudes sticky resin and dropped seeds. To remove, every last root must be removed or it regenerates as much as 40 feet away. It makes me wonder about whoever the city pays to recommend trees.

Interesting tree, and another bad choice for a street tree...which now should include the Chinese lantern tree (which is a horrible choice in so many aspects) and the Italian pines on Anapamu

Fascinating!! Thank you for

Tune in on August 24 to the

That loopy overpass was

Some one finally got mad that

Do you feel better after your

The suspect is a local rich